Continuing my endeavours to get Adelie Linux on a powerbook G4 i'm trying to
configure GRUB to dual boot OSX.
I've looked everywhere but couldn't find a way to boot OSX from GRUB when
the GRUB partition is the default.
Does anyone know if this is possible and if so how to do it?

If you see this post can you take a look at the message I've sent you through chat. Thank.

The Adélie installation on my iBook G3 is broken at the moment, but I was just manually booting into grub or OS X via OpenFirmware.

Does Adélie Linux include the nvram tool?** If so, you could write a simple shell script.

rebootmac.sh (installed on the Linux system)

Code:
Not quite as pretty as an option in the bootloader (a la yaboot), but it still should do the job.

** EDIT: I answered myself with the Live CD, the nvram tool does appear to be included.
Last edited: Oct 17, 2018
Reactions: G4fanboy and philgxxd

Ill look into that .
Just another question how was your CPU usage, do you remember?
My system displays 60% sys at the console. It seems a bit high but
if I start the live CD its the same.

Ill look into that .
Just another question how was your CPU usage, do you remember?
My system displays 60% sys at the console. It seems a bit high but
if I start the live CD its the same. 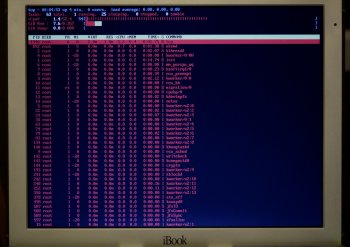 It shows CPU idling at 54% with no responsible processes.. maybe it is a CPU throttling / sleep process?

I'm not sure but it seems system time is very high which doen't leave much
for the rest.
When I start up X if pulseaudio is running it goes immediatly to 90 plus percent.
If I stop it it goes to between 70 and 80.
If I look at top when running stuff it looks like it's doing a balancing act between user software
and system but the problem is that no CPU process is using it but usage is still high.

Another thing is because of this total load is always high and cpufreq management with
powernowd is not able to do anything because total cpu is always around 80. The
result is high temps and loud fans

I'm trying to get awilfox input on this but she hasn't replied yet.