Adventure To Fate : Battle Arena - is an JRPG style game based around The Tournament of Fate.
-300+ items to loot, craft, buy and find.
-Hundreds of unique monsters to fight
-Tons of character creation possibles (6 Classes, 6 Races, 6 Professions)


- The Story Behind The Tournament of Fate -
100 years ago this day Castle Cardell was saved from the diabolical Sir Thanatos and his evil minions. A hero much like yourself sacrificed his life to save not just Castle Cardell but the whole realm!

On this 100 year anniversary we have decided to celebrate by holding The Tournament of Fate. Heros from all over the realm have come to stake their claim at greatness and untold riches!

The Tournament of Fate will test strength, endurance, wits and most of all heart. Only the greatest of all champions stand even a chance at completing this heroic task but if they do they will be remembered for all time!

The Tournament of Fate takes place in five different arenas. Each arena includes a battle ring, shop, vault and two portals. To start a battle round head to the battle ring and enter. Once you complete an arena you can head to the northern portal which will take you to the next area. Good luck and may the gods be with you!


- Other Features -
Indie created game built for the people!
NO pay wall game is built to be played for free!
100s of hours of game play between all classes!
Autosave feature - Easy to pick up and play at any time!
Unlimited character slots so you can try every combination possible.
Retro Pixel Art
8Bit sound/music
Library system that explains general game, character, skills and combat systems.


Thanks for taking a look! 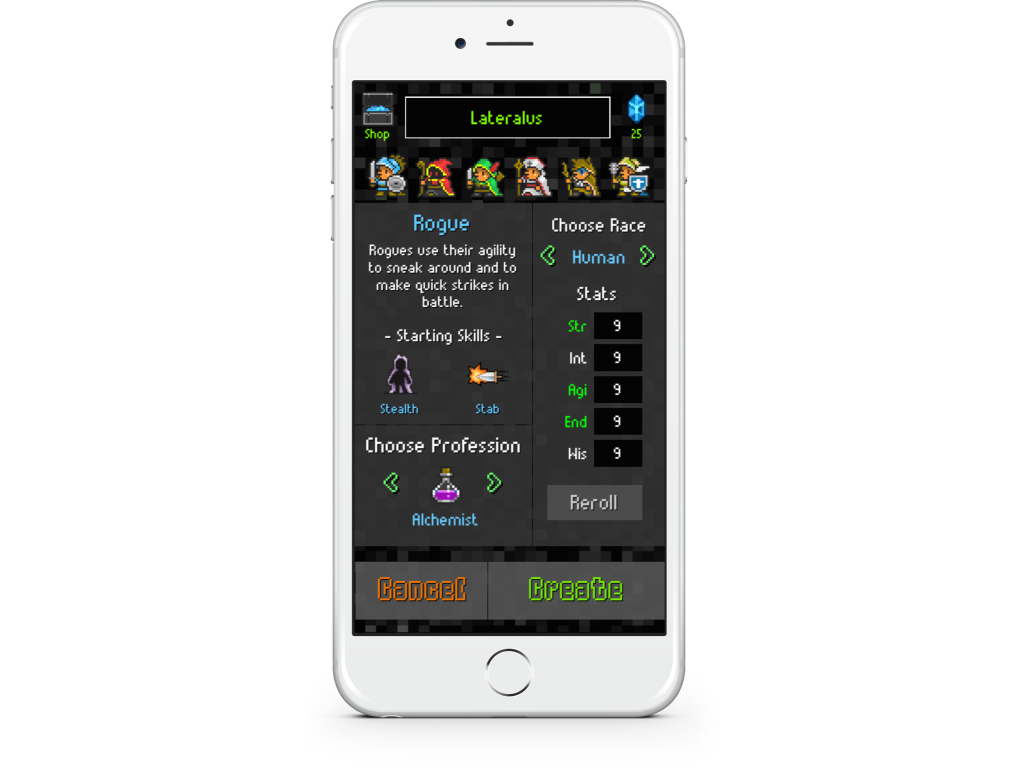 Very excited to announce that Adventure to fate hit 10000 downloads in its first 4 days!

I'm pushing through a quick update based on user input. Here is a little summary:

Here is a little summary of what will be in the update (keep in mind this was a quick update I still have a good list of features to make it in the next one).

-Roller-
-Fixed race select (when hitting the left race arrow it wasn't updating descriptions)
-Updated jeweler description so it now tells the types of items you can make.
"The forging of metal jewelry such as rings, bracelets, necklaces, shields and crowns."

-Game Play-
-Advanced Crafting Mode (shows all blacksmith things you can make)
Now displaying ALL weaponsmith crafts. Be sure to only craft what your characters can use. There is NO undoing this action.
-You can now view Full stats and full help library by taping anywhere in the stats box during a battle.
-Sped up battles a tiny bit (will do more in the future there are tons of components to this besides just changing 1 timer)
-Upped all bonus gems for completing Arena Stages (should gain about 25-75 more per play through)
-Upped some fights bonus gems (about 10-15 more per play through)
-Banner Ads now start a few levels later
-Ad or gem to replay now start a few levels later
-Bonus Loot for watching an ad now gives about 15% more materials.

-Added Double All Gems Earned IAP
With the changes to Gems earned in general you are looking at earning about 500-600 per play through. this will allow you to unlock all classes, races, professions, vaults, etc pretty easily in a play through and a half at most.

That should cover it I am in the process of submitting and will be testing throughout their review process. Update reviews have been pretty quick I am hoping for a 2-3 day review process at the most!

Just updated to version 1.4 Here are the full update notes:

Illusionist are a unique class that use illusory spells and their enemies abilities against them.

Mimic - This skill becomes the last skill cast by your enemy.
Skeleton Form - A morphing spell that grants extra armor and spell damage.
Shadow Bolt - A shadow based damaging spell.
Life Spark - A minor healing spell.
Meteor Storm - A fire based spell that damages all enemies.
Charm - A debuffing spell that lowers enemy stamina and other stats.
Avenge - A skill that deals damage equal to the amount last dealt to you.
Mind Blast - A shadow based damage spell.
Nightmare Form - A morphing spell that raises most offensive abilities.

I want to thank everyone who helped me find these bugs as posted above. Keep the suggestions and questions coming to the official game thread below and I will continue to improve the game so keep an eye out for future updates.

Thanks for all your support and remember to re-rate and review the game!

Hey Guys I just completed another update this time focused on a new class (Monk) and 2 new races (Halfling, Troll) Here are the update notes:

◆Halfling Race◆
▸Halflings are a quick and dexterous race who resemble humans but are much smaller. Halflings are rather balanced and work well with all classes.
▸Bonus Skills: Quick Feet (Higher Dodge Chance), Make It Count (Higher Critical Damage)

◆Troll Race◆
▸Trolls are a very tall race who possess the ability to regenerate much faster than other races. Trolls are a legendary race and work best as Knights, Paladins, Druids, Rogues or Monks.
▸Bonus Skill: Regenerate (Huge HP Regains)

▸Equipment Section
-Added Hints to all equipment and potion slots

▸Battle Select
-When opened auto selects the dungeon arena round so you know which battle you are at
-Added hints on gold, material and gem so it does not just say the image name
-Added labels to previous and next battles on the selector screen
-Added labels on all the monster images and exit screen

▸Arena Screen
-When entering the arena it auto reads the combat log letting you know what monsters you are facing in the arena.
-When attacking it will now speak damage dealt and when monsters die
-Now can read stam, hp and sp bars and percents
-Now can read player stats
-Touching npcs says name and percent of life left
-Attacking npcs says damage miss block dodge etc
-Touching yourself says player hp percent
-Double tap hold on a skill or potion to see what it does.
-Notification when casting a spell without enough sp, stam, hp or wrong cast type

◉Bug Fixes◉
-Fixed a summon type on combat log
-Fixed a bug where you could get 2 different classes images for your character.

A special thanks to Matheus (drg), Dark and all the other members at Audiogames.net that inspiried and helped me with this update.