The popular Android-only AllCast media streaming app has now made its way to the iOS App Store. The app allows users to stream media to a variety of smart TVs and standalone set-top devices such as the Apple TV, Roku, Xbox, and Amazon Fire TV. 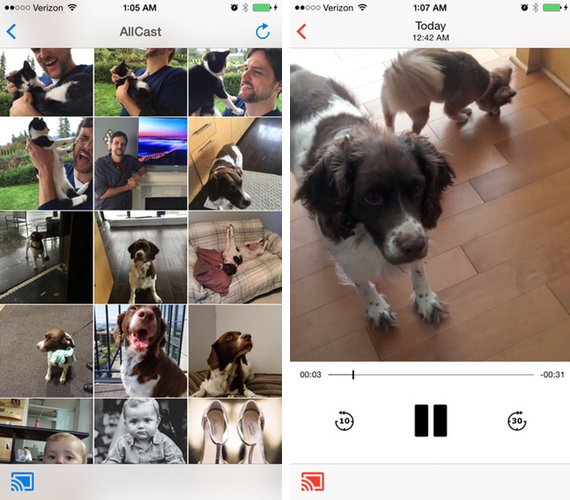 The app uses DLNA to stream media and requires only minimal configuration before users can stream to any media device on the same wireless network as their iPhone or iPad. The setup varies with each device -- Xbox 360 owners must enable the "Play To" option in the settings, while Fire TV owners must install the AllCast app for the Fire TV. Once configured, users can open the AllCast app for iOS, select their media, and choose the connected streaming media device to start playback.

AllCast is similar to Apple's AirPlay technology, an Apple-developed streaming system that allows Apple owners to wirelessly stream content on their iOS devices and Macs to their HDTVs and speakers. Unlike AllCast, AirPlay also supports mirroring that uses an Apple TV to display a Mac or iOS device screen on an HDTV.

The AllCast app is available for free in the iOS App Store and is compatible with both the iPhone and iPad. A $4.99 in-app purchase unlocks a premium version that removes all advertisements and allows for the playback of longer video streams. [Direct Link]

AllCast isn't "like Apple's AirPlay". It's not a technology for streaming, it simply aggregates all of the popular streaming technologies (including AirPlay) so that you can send content to any device with any technology (AirPlay, Google Cast, DLNA, etc).
Comment

I find that these apps let you stream videos from you photos app. They don't let you stream from your videos app, which is my primary interest. I'll test this one when I get home.

it's nice. I downloaded the app, it accessed my photos from my iPad, touched a photo, and there it was on my smart tv.
Comment
O

The app works great but other than extended vids and no ads what other features are unlocked with the $4.99 iap. As I just tested a vid with my sony smart TV and it didn't give me the option to scrub the vid
Comment

Note: There is another "AllCast", "AllCast Stream" by AuralWare, not the same.
Comment
F