Techkiddy reposts (via phoneArena.com) some photos originally shared by Sonny Dickson showing alleged parts for Apple's upcoming iPhone 5S. While most of the parts have been seen several times in the past, the new fairly high-quality photos provide a continuing look at the parts, which include the nano-SIM tray and speaker button, as well as flex cables for the home button, charger connector, WiFi component, and speaker. 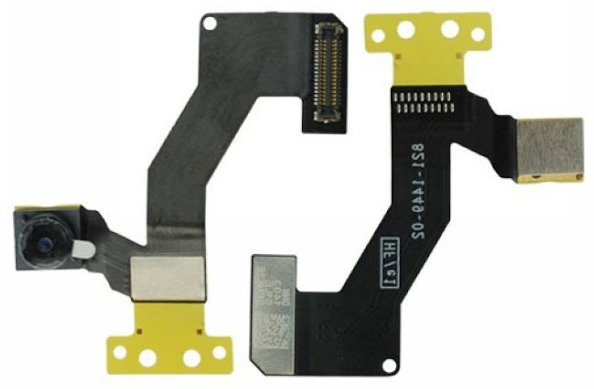 One complication with part leaks this year is Apple's apparent plans to launch both an iPhone 5S and a new lower-cost plastic iPhone. Suppliers and other sources may in some cases be confusing which parts are from which device.

Finger print scanner is going to be for the iPhone 5FS. Might as well start gadget spamming like Samsung.
A

Cool! Apple is announcing it the day after it is released!

No one will see it coming.

This doesn't make any sense to me.

Perhaps there will be a fingerprint reader in the new iPad, not the next iPhone.
T

So they will release it the day before it's announced???

And I'm very confused about this fingerprint sensor... We keep hearing it's coming this year, but we've seen zero physical evidence it's going to be there.

If it ends up not leaking parts beforehand and makes it into the 5S it will be very impressive, at least I think it will be.
B

You forgot to put smiley faces on them.

Fingerprint sensor in screen maybe? I hope so at least.

I'll be surprised if a fingerprint sensor ends up in the 5S. Not so much because it's there, but because they did such a good job of not leaking parts or giving any real evidence of its existence.
D

cmChimera said:
Fingerprint sensor in screen maybe? I hope so at least.
Click to expand...

Suddenly all those 'fingerprint scanning' apps might get a new lease of life!
A

So announce on the 28th but will launch on the 27th the same month.

So launch a day before announced?
K

tann said:
So they will release it the day before it's announced???
Click to expand...

Controlled leaks required too much effort, so they now give very gadget blog the opportunity to run with last minute leaks the day before the special event.

Bearxor said:
This doesn't make any sense to me.
Click to expand...

The fingerprint scanner is on the lock screen and will take the place of the 4 digit passkey.
T

Bearxor said:
This doesn't make any sense to me.
Click to expand...

Makes perfect sense to me. Going against every traditional ways of launching a product, Apple will silently display and sell the iPhone 5S in store without the customers knowing (since they both look the same). And then the day after, Apple will announce the 5S and indicating that all customers who bought it the day before has the 5S in their hands. Thus cutting down the long waits and drama of getting the iPhone 5S. Genius!
L

C'mon, Apple, give us the fingerprint sensor... They are all over my iDevice displays anyway!

applefanDrew said:
Cool! Apple is announcing it the day after it is released!

No one will see it coming.

This. I read this and thought 'interesting'.
P

MacRumors author screwed something up!

This is a quote from which MacRumors is quoting:
"The device is expected to be released on September 18"

marty11 said:
The fingerprint scanner is on the lock screen and will take the place of the 4 digit passkey.
Click to expand...

nothing will take the place of the passkey. if/when the scanner arrives it will be an option -- just as one can use a strong password instead of the PIN.
L

Has anyone said if the iPad 5 will have the fingerprint scanner too?
I

Is it possible the fingerprint scanner could be imbedded in the screen?
D

Branskins said:
Has anyone said if the iPad 5 will have the fingerprint scanner too?
Click to expand...

It's possible that the fingerprint scanner wasn't ready in time for the iPhone 5S and iPad 5, so it will be the next year's models that get it. Either that or Apple just got lucky that no one in China took a pic of that specific part...yet.