The much-rumored fingerprint sensor in the iPhone 5S may be referred to as "Touch ID", according to an alleged new photo of an iPhone 5S user guide uncovered by Nowhereelse.fr [Google Translate].

The photo features what looks to be an iPhone 5S running iOS 7 and also shows off the rumored silver ring around the home button. 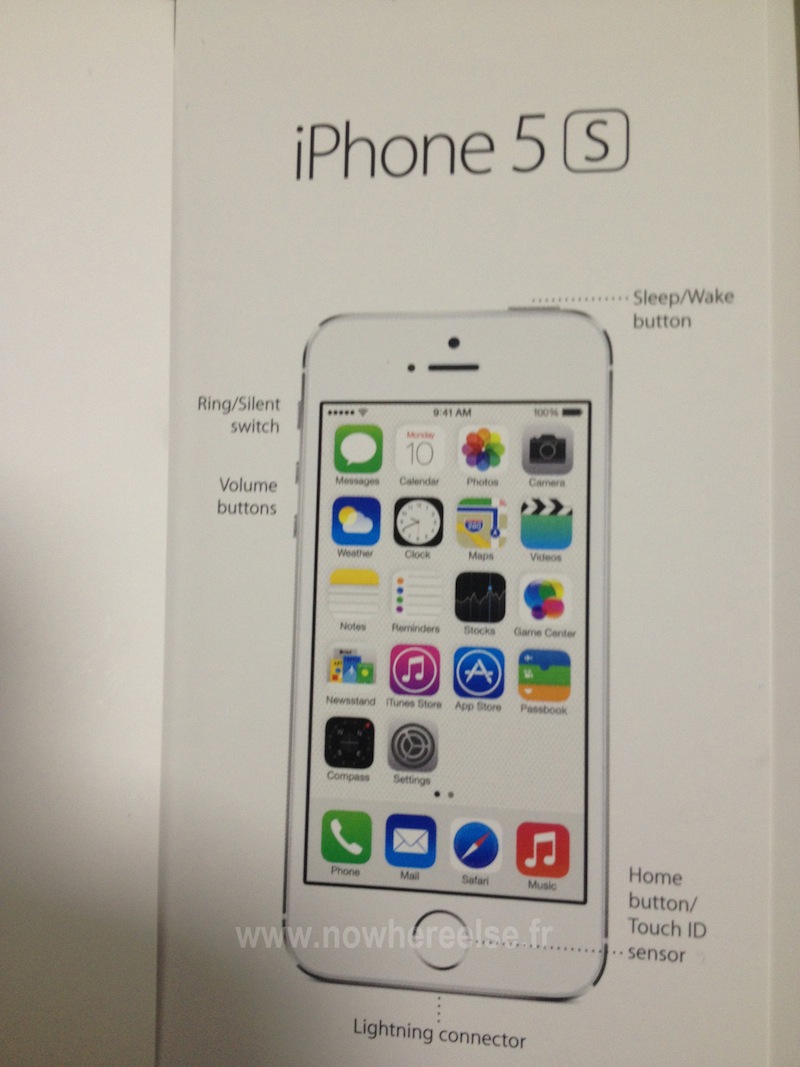 However, the photo also appears to showcase a slight departure for naming conventions for iPhone buttons in user guides, referring to "Volume Buttons" and "Sleep/Wake button" instead of the usual "Volume Up/Down" and "On/Off Sleep/Wake". Although the naming conventions in this photo do appear in the user guides for some iPod and iPad models.

Late last night the Wall Street Journal confirmed that the new iPhone, which is set to be unveiled early Tuesday at a press event at Apple's Cupertino, CA headquarters, will feature a fingerprint sensor.

In recent weeks and months the support for an iPhone with a fingerprint sensor has gathered steam, with questionable photos of iPhone 5S packaging, leaked parts and iOS 7 beta code hinting that the new hardware feature is forthcoming.

The new iPhone will be unveiled today at 10:00 AM Pacific Time at Apple's Cupertino headquarters. MacRumors will have live coverage of the event.

Update: Several other pages from the guide have been posted by C Technology, but they primarily show safety and warranty information and do not reveal any other details on the device.

Is the home button icon gone then?
M

I guess the leaks will not be winding down. More to come.

All I need now is the Apple stickers and I can build my own iPhone 5S.
S

MY BODY IS READY!

Yamcha said:
Is the home button icon gone then?
Click to expand...

I really hope not. It's iconic.

white background on a white phone. who'd of thought?
S

The silver ring around the home button looks really slick on the white iPhone!

MacFather said:
Nice To See Tim Doubled Down On Secrecy
Click to expand...

You both realize this is just 10 hours before the Announcement, right?
J

Can't wait to hear the preposterous name Samsung decides to call this feature in their next smartphone...

Catcher Freeman will be using the new iPhone C(Classic)

grand, now can we please have the unlocked version in under 3 months?
thanks.

So what's the deal everybody, Is this going to be aired live?

Jayse said:
Can't wait to hear the preposterous name Samsung decides to call this feature in their next smartphone...

LG done it years ago so Apple are way behind. LG should sue
5

Wow! These leaks are so exciting! So it seems the home button will have a ring around it, but it's not an LED indicator? It doesn't matter, I just liked the idea.
W

Jayse said:
Can't wait to hear the preposterous name Samsung decides to call this feature in their next smartphone...

You know apple is not the first to have a fingerprint scanner on a smartphone, right?
So is apple copying, or is it they know how to do it right?

Touch ID. Sounds like this button has a ring to it....

weespeed said:
You know apple is not the first to have a fingerprint scanner on a smartphone, right?
So is apple copying, or is it they know how to do it right?
Click to expand...

Apple has always taken existing technology, and just made it better. People didn't know how to do touchscreens right until Apple did them. Even then people were skeptical (remember all those android phones with physical keyboards?)

Once Apple shows everyone how to do fingerprint scanning, others will follow suit.
J

I think this is very dangerous thing.

weespeed said:
You know apple is not the first to have a fingerprint scanner on a smartphone, right?
So is apple copying, or is it they know how to do it right?
Click to expand...