Following the debut of "Prime Day" in 2015, and its return in 2016, Amazon this morning announced the third annual Prime Day will arrive next month, on July 11. Amazon calls this year's event an "epic day of deals on everything you're into," and like previous iterations you'll have to be subscribed to Amazon Prime to gain access to the discounts.

Prime Day is expanding this year as well, beginning officially on July 10 at 6 PM PT and lasting a total of 30 hours into July 11, with "new deals as often as every five minutes." Additionally, Amazon has expanded the sale to 13 total countries in 2017, including the U.S., U.K., Spain, Mexico, Japan, Italy, India, Germany, France, China, Canada, Belgium and Austria.

To give a spotlight on small businesses throughout Prime Day, Amazon said that nearly 40 percent of the Lightning Deals that appear during the event will come from small businesses and entrepreneurs.

"Our members love Prime Day and we have been thrilled by the response over the last two years. It is inspiring us to make it even better this year for Prime members," said Greg Greeley, Vice President, Amazon Prime. "Every part of our business is working to deliver more deals for a record number of shoppers. This year's Prime Day is too big for 24 hours - so we're giving Prime members 30 hours to shop!"
Click to expand...

Deals will be organized by more than 20 themes, including topics like pet lovers, gardeners, techies, artists, and more, so shoppers can quickly find items that they're interested in. To entice users to engage with Alexa devices, Amazon is introducing even more Alexa-exclusive deals discoverable through Echo devices and Fire Tablets.


Similar to last year, Amazon is touting its TV deals in 2017, saying that a large variety of brands will be sold on Prime Day and specifically naming the new Element 4K Ultra HD Smart LED TV - Amazon Fire TV Edition. Amazon said that Prime Day 2017 will represent "one of its largest volume TV deals in history," with a record amount of inventory, but Amazon reminded shoppers the TV category is the one likely to sell out the fastest.

To prepare, Amazon encourages shoppers to visit the Amazon app on iOS [Direct Link] to preview, track, shop deals, and set up alerts. Leading up to July 11, the company is also offering discounts on various subscriptions and items across the website every day, and starting today that includes discounts related to Amazon Music Unlimited, Prime Video, Kindle Unlimited, Audible, and Prime Pantry items. More information about the items on sale now can be found on Amazon's Prime Day webpage.

Finally, for me, something to look forward to on my birthday. That, and the free Slurpees my friends get me on that magical date - which never seems to get old to them .
Reactions: nyctravis

Nice, looking forward to some deals
Reactions: kdarling, earthTOmitchel, Sunny1990 and 1 other person

Can't wait to see what they have!

Here's to hoping they have some RX 580s in stock!
X

im_to_hyper said:
Can't wait to see what they have!

Here's to hoping they have some RX 580s in stock!
Click to expand...

I'd look for an Nvidia card if I were you, as the RX 580 will be as expensive as a high end nvidia card.

Sorry to be a miser, but they may as well call it underwhelm-day, that is if it is anything like last year s effort (inc. Black Friday). Both were like they were clearing out the dusty stock on the shelves at the back of the warehouse.

Hopefully though it will be more like 2015, I got some cracking deals then.
Reactions: SBlue1, Cameroncafe10a, bigjnyc and 1 other person

Looking forward to it, got some good deals last year.

Ah, the internet’s biggest yard sale of junk that no one needs and everyone complains about. Look forward to it every year.
Reactions: Cameroncafe10a, miknos, Oblivious.Robot and 3 others
J

I absolutely can not wait for a 56% off get it while its available flash sale on 55 gallon drums of brick dust.
Reactions: willmtaylor

willmtaylor said:
Ah, the internet’s biggest yard sale of junk that no one needs and everyone complains about. Look forward to it every year.
Click to expand...

I scored a great deal on an Amazon Tap last year, so there were some good deals to be had. But you are right, there was a lot of really oddball junk there also. Hopefully this year will be better. 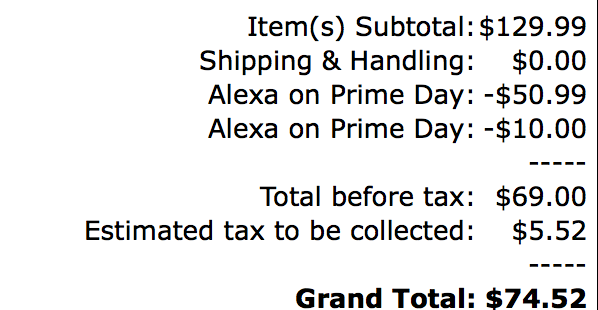 Last year was kind of a bust for me. Ironically they offered a Hue starter set for a dirt cheap $115 or so BUT you had to order with Alexa and alas I had no Alexa. But BB was on the hunt and matched that price on it's eBay store and offered store pickup so I bit.

I'm not really looking for anything this year but I would bite at a "cheap" mesh router system like the original Orbi.
B

At least this year, they're holding it on a day which is prime. Last year, "Prime Day" was on a composite day.
Reactions: hauntvictim, CarlJ, neutralguy and 4 others

Just renewed my Prime membership. I didn't take advantage of it last year. I like the element of surprise and may be I will score something nice. It's like Black Friday sales, but only in the Summer.

Rack up those Amazon credit card points, that's all Prime Day screams to me.

That offers list is endless, and most of if was junk. I stopped scrolling through it and just took a look at my saved items to check if one of them got cheaper every few hours. And yeah I fond some Hue Lamps with a nice discount.

Gonna be another one of those days where they hike prices on everything you'd mostly find in bargain bin/99 cent stores by 15-20%, apply a 5% discount, and then call it a sale.
Z

I managed to lock down quality SSDs during both events. I'll probably pick up some microfiber towels this year if they go on sale.
Last edited: Jun 29, 2017

Can't wait til to go through pages after pages of junk, and then when I missed an item and decided to go back a page, it is no where to be found again.
Amazon really have some serious work needs to be done with their search.
Reactions: campyguy
C

B4U said:
Amazon really have some serious work needs to be done with their search.
Click to expand...

Slickdeals is my friend. They can be your friend too!
W

WBRacing said:
Sorry to be a miser, but they may as well call it underwhelm-day, that is if it is anything like last year s effort (inc. Black Friday). Both were like they were clearing out the dusty stock on the shelves at the back of the warehouse.
Click to expand...

Yeah for the most part. There were a few golden nuggets amidst the chaff like the Crucial 750GB SSDs for £105 that I snapped up. People would kill for those prices today. My iMac loved the upgrade. I manage to find something worthwhile each year but it is a lot of hard work digging through the rubbish to find the genuine bargains.
You must log in or register to reply here.
Share:
Facebook Twitter Reddit Email Share Link
Register on MacRumors! This sidebar will go away, and you'll see fewer ads.
Sign Up
Top Bottom