Amazon has released an iPad app for its Instant Video renting and buying service and its streaming Netflix competitor, Amazon Prime Instant Video.

The app allows users to download purchased and rented movies and TV shows for offline viewing, as well as stream Prime Instant Video titles when connected to the Internet. Amazon also keeps track of the user's place in a video, allowing it to be resumed at the same point on other supported devices like a TV, Mac or Kindle Fire. 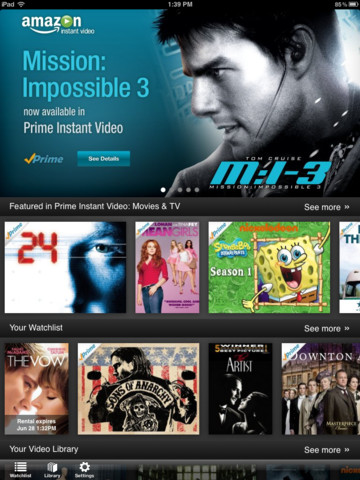 With Amazon Instant Video, you can:

- Stream thousands of titles available from Prime Instant Video at no additional cost with a Prime membership, or watch over 120,000 videos available from the Amazon Instant Video store
- Download purchased and rented videos from Your Video Library
- Shop over 120,000 videos available from the Amazon Instant Video store by visiting Amazon
- Add videos to your Watchlist from a PC, Mac, or Kindle Fire for later viewing on your iPad
- Subscribe to a TV Season Pass by visiting Amazon and episodes will automatically be available on your iPad the day after they air
- Start watching on your iPad, and resume watching right where you left off on a Kindle Fire, PS3, PC, Mac, or hundreds of models of connected TVs and Blu-ray players with Amazon Whispersync.
Click to expand...

Engadget says in a mini-review that "Amazon is really coming after Netflix with this one" and that the app is polished and runs smoothly.

Amazon Prime is available for $79/year and offers discounted overnight shipping and free two-day shipping on nearly every item that Amazon sells, as well as thousands of on-demand streaming movies and TV shows and Kindle Books.

Yesterday, Amazon also updated its Cloud Player service with an iTunes Match-like matching feature. This is a significant upgrade, as Amazon's cloud music offering previously required users to upload all their music which could take hours or days depending on the size of the user's music library.

Amazon Instant Video is available free on the iPad via the App Store. [Direct Link]

Works great so far.
B

Now the question is, when will it come to the AppleTV?
P

ericvmazzone said:
Now the question is, when will it come to the AppleTV?
Click to expand...

Very soon I bet, especially since Hulu Plus is now on ATV.
D

Stinks that it will only work with a wifi connection.
F

HA! I've had Prime for years and didn't even realize I get limited content for free. Suppose I should check it out.
C

does it support airplay?

Feedback I tried to leave them via their requested address. You'll see why "tried" below..

First, I'm appreciative of the new iPad Prime Streaming Video app (it's Waaaay overdue). I've wanted that for ages. Once you get it running on TiVo, then I'm set with everything.

However, there's some issues with it. None are going to make me grab my pitchforks and storm the castle, but there is some strangeness.

1) It's iPad only. Why not iPhone as well? Given there's no iPhone flavor, there had to be a conscious reason as to why not. I don't take my iPad everywhere due to size, but my phone does go. In certain circumstances, I could see myself watching something when I'm stuck doing nothing (like DMV or something).

2) AIRPLAY IS BROKEN! When you try and use Airplay to send the show through an AppleTV to the TV set, it only sends the audio. Video stays on the iPad. The WatchESPN app has the same problem. The ESPN app used to work fine over Airplay, but a recent update changed that, and it behaves the same way. What I've read about that problem is that it's a concious effort by the app maker not to let Airplay work. So - WHY? Why is this broken? Yes, I know I can play it on my PS3 & my 360. But to fire them all up, run the app, find what I want, play it.. It's a lot quicker given the nature of iOS to run it there, and stream it via Airplay. So again - why did you guys disable this? If you did not, then it needs to be fixed. That Airplay doesn't work right seriously impacts the usability of this app.

3) On the page for this that you link from the front page of Amazon, you ask folks to send feedback via email to this address: ipad-aiv-feedback@amazon.com I tried - twice. Both times the address bounced. If you're gonna publish an address and ask for feedback, it should bloody well work!

Overall, it's very good that this app exists (finally). But if you finish off the job, and make this work properly, then it'd probably be my goto app, and I can finally kiss Netflix goodbye.

Wow. This is a welcome surprise.
N

Other then that it's much appriciated

Finally. This took way longer than it should have.

Is this going to be like the Kindle app where you can download things you've purchased elsewhere, but you can't actually purchase something in the app?

Is their movie/tv show catalog better than Netlix?
R

Are you kidding? this is HUGE news for iPad owners who also have Amazon prime.

If they just get airplay working, I will not have to buy a Roku.

Feel a bit better to know that Amazon was not just ignoring my emails.

Small White Car said:
Is this going to be like the Kindle app where you can download things you've purchased elsewhere, but you can't actually purchase something in the app?
Click to expand...

It's in Apple's App Store, so yes, until Apple changes their rules you will have to purchase content elsewhere. Unless Amazon wanted to give up 30% of revenue on sales that they almost certainly make nowhere near enough to cover that kickback to Apple.

It's not an Amazon story, it's an iPad app story. Why the Amazon hate though?

You can even download videos to your iPad. Now they just need to do an Apple TV app (not a hard port really). Also being able to download the eps to our Mac's would be great too!
G


OtherJesus said:
Is their movie/tv show catalog better than Netlix?
Click to expand...

I feel that Netflix has a bit more documentaries while Amazon Prime has more TV content. So I say its a bit hard to compare them both. Maybe a mixture of half netflix and half Hulu Plus?

I have it and Love it! Since I shop a lot at amazon, 2 day shipping isn't bad, and it does tend to come in two days...
L