Amazon has announced it is extending third-party support for its Alexa Voice Service (AVS) internationally, with rollout beginning today across the U.K. and Germany (via TechCrunch).

First launched in the U.S. in 2015, AVS is the voice-interaction software that powers the company's Echo family of smart speakers as well as a range of supporting third-party smart home connected devices, such as thermostats, lamps, fans, wall switches, and more.

The support will mean owners of supported devices can voice-interact with additional services, such as TuneIn Radio and local Skills - Amazon's other API that lets developers build bespoke services to work with Alexa - although users should note that some services like iHeartRadio and Kindle currently only work in the U.S. 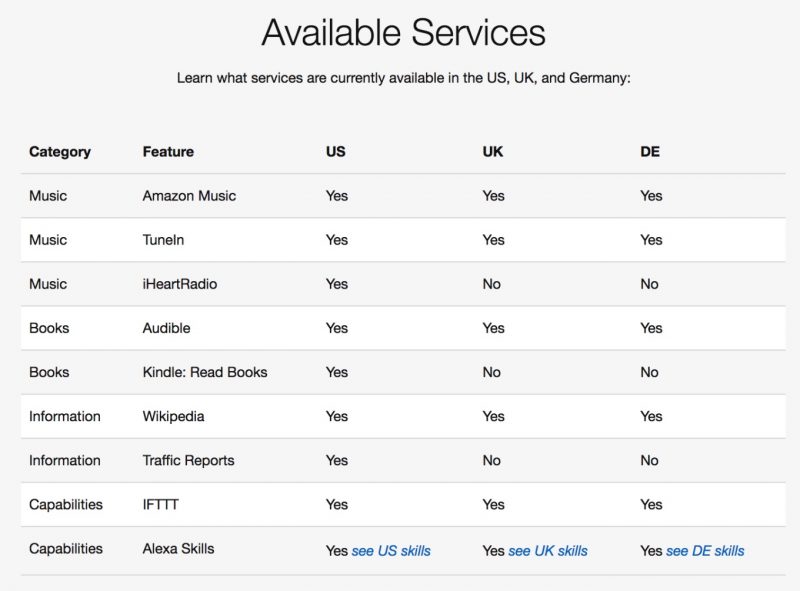 The expansion of AVS into Germany and the U.K. follows the launch of the Echo and Echo Dot in those countries last year. Amazon has yet to expand its Alexa-powered range to other markets outside the U.S., but with plans to shift 10 million units in 2017, the company is expected to speed up rollout soon.

I love the idea of Alexa and I have a few dots around the house, but she disappoints much more that Siri.

I feel it's less like interacting with a device that understands the context of speech (because it doesn't) and more like the old speech recognition we used to have where you have to say specific trigger phrases to get things to happen.

Siri blows Alexa out of the water for Philips Hue integration - and despite IFTTT integration Siri is more flexible once you've added devices as you can create a scene with the phrase you want that makes sense - instead of saying something like "Alexa, trigger the blinds closed" to Alexa which isn't normal speech.

Couple that with the fact normal conversation sets her off all the time and she can only answer about 20% of the questions I ask and I find it mostly useless at the moment. Also when are these devices going to learn the context of "and" surely it's not hard to ask Alexa to turn the TV on AND set the lights to... Instead of two separate commands.
Reactions: keysofanxiety
Comment

Now amazon needs to bring alexa to canada please. i want to control my non-homekit wemos...
Comment
A