One month after its announcement during a Nintendo Direct in late October, Nintendo today has begun rolling out Animal Crossing: Pocket Camp onto iOS [Direct Link] and Android devices worldwide, following a limited soft launch in Australia. The game was announced to be coming out tomorrow, November 22, but it has begun appearing on the iOS App Store for some users in the United States, United Kingdom, Austria, and France, and potentially other markets where it is launching. 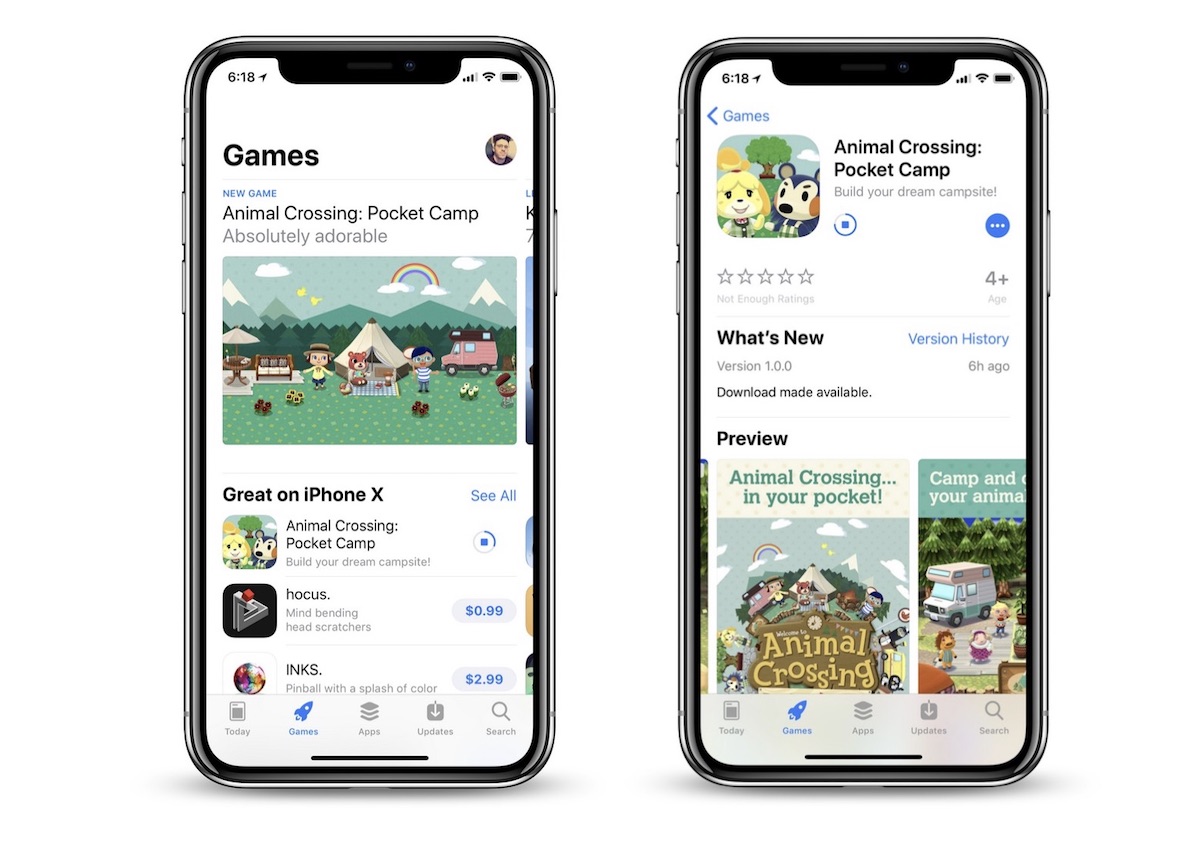 Similar to the latter two games, Animal Crossing: Pocket Camp is a mobile-optimized version of its franchise's larger console games, and introduces a few new features into the traditional Animal Crossing gameplay to streamline certain actions for one-handed smartphone sessions. For example, both fishing and bug hunting are as simple as tapping on the screen, and the world that the player occupies -- centered around a campsite -- is scaled down from the villages of games like New Leaf and Wild World.

The main mechanic of Animal Crossing: Pocket Camp centers on convincing animal villagers to stick around at your campsite by foraging for materials and crafting their favorite furniture. Outside of the camp, there is also a beach, river, island, and other areas that are accessible through your camper, which you can also customize and decorate to your liking. Additionally, you can visit your real friends to check out their camps to give them "kudos" on their decorations and see what items they're selling in their Market Box.

Any time you visit Animal Crossing: Pocket Camp, the game will reflect the time of day and current season of the real world, and Nintendo has said it will be launching seasonal events over the holidays with exclusive furniture, outfits, and item decorations for players to collect. 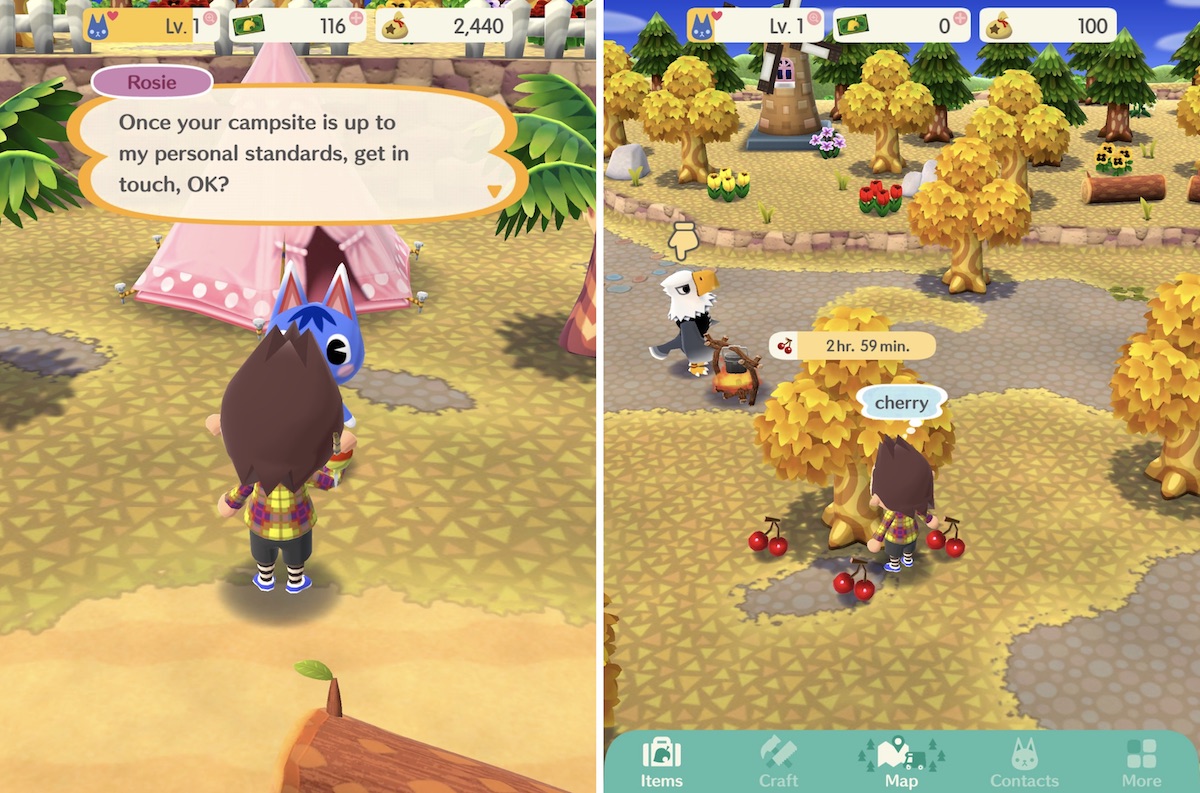 Nintendo's latest smartphone game is free-to-play and uses optional "Leaf Tickets" as in-game currency, but our sister site Touch Arcade got hands-on time with the game in October and found very little reason to spend real money, thanks to gameplay systems that eventually reward players with the items they want if they put in the time to get them.

You can also spend Leaf Tickets to craft any furniture you might not have the materials for, but again, the first session of the game sprays so many of these different things at you that you're really going to need to play the game for a while before you're running low on anything.

There's other "cheater" items (and I'm saying "cheater" with the absolute most exaggerated air quotes imaginable) that you can buy with Leaf Tickets too like fishing nets and honey, which are used to catch loads of fish or bugs in one go- But, it seemed like if I wanted to invest the time I could just fish and catch bugs all day, so this seems like a real weird way to spend premium currency.
Click to expand...

Players should note that Animal Crossing: Pocket Camp requires a "persistent internet" connection -- mentioned in the game's "digest" trailer -- which seems to be similar to the always online requirement of Super Mario Run. At the time of Super Mario Run's launch, Shigeru Miyamoto said that Nintendo's reasoning behind this move is to "support security" and prevent piracy.

Looking ahead, Nintendo's next mobile game is rumored to be set within The Legend of Zelda universe, although it's still unclear exactly what the gameplay would be for that app.

For more information on Animal Crossing: Pocket Camp, head to Nintendo's website, and you can download the game on the iOS App Store for free beginning today [Direct Link]. For those playing on iPhone X, the game has been optimized to support the 5.8-inch display of Apple's new smartphone.

Update 5:27 a.m. PST: Some users attempting to play the game have been met with multiple communication errors, and it's unclear at this time what might be the issue, although it could be related to a large amount of people trying to start the game following launch.

GadgetBen said:
Also showing and downloading in the U.K.
Click to expand...

Also up and running in Austria.
T

Getting lots of communication errors..

Also getting communication errors. Currently unplayable. I’m sure it will sort out in the next few days.

Fun game so far. Might eventually get tired of the one-button mechanics though.

tmaxxtigger said:
Getting lots of communication errors..
Click to expand...

b0nd18t said:
Also getting communication errors. Currently unplayable. I’m sure it will sort out in the next few days.
Click to expand...

ck2875 said:
Fun game so far. Might eventually get tired of the one-button mechanics though.

I had similar errors but have since been able to get in and finish my first quest, so just keep trying!
R

Ugh, another persistent online game? At least with this one you don’t have to buy it, but it’s why I refused to pay for Mario on iOS. Still should be fun, but rather annoying especially in situations like right now where you can’t connect.

I'm not a big Nintendo fan but I'll give this one a wack.

JosephAW said:
I'm not a big Nintendo fan but I'll give this one a wack.
Click to expand...

Just as long as you aren’t wacking Resetti.

I had the error when I first opened the app but after a reboot it worked fine. I absolutely LOVE this game!
Reactions: GrumpyMom
R

Kids are loving it. Saw a few communication errors, but all good for now.
5

I'm really enjoying this, and I never owned the DS version (I was usually watching over my girlfriend's shoulder!). Servers are struggling this morning for sure. Glad to see Nintendo have realised that a large part of their future involves sharing their IPs to existing platforms, especially when said platforms have hardware which everyone owns and can easily run Nintendo games.
Reactions: GrumpyMom
N

JosephAW said:
I'm not a big Nintendo fan but I'll give this one a wack.
Click to expand...

The game is unplayable right now. I'm being constantly booted by the server, and because every interaction requires communication with the server - it's failing constantly and I'm having to retry connection constantly.

I expected Nintendo to be able to cope with large amounts of players. But my theory is that it's rammed because of Asia. Don't think it was available there last night, when the servers were absolutely fine. Now I keep getting Asian players adding me, so that's where my theory comes from.
S

Are the talking animals suppose to not be understandable? They are talking so fast I can't understand what they are saying. Anyone else having that problem? Or is that how the game is suppose to work?

squest77 said:
Are the talking animals suppose to not be understandable? They are talking so fast I can't understand what they are saying. Anyone else having that problem? Or is that how the game is suppose to work?
Click to expand...

There's a text that comes on the display at the same time they talk. Read that.
Reactions: GrumpyMom
E

squest77 said:
Are the talking animals suppose to not be understandable? They are talking so fast I can't understand what they are saying. Anyone else having that problem? Or is that how the game is suppose to work?
Click to expand...

Animal Crossing is similar to The Sims, where the characters speak gibberish. They act like it gives the games character but it's really just so they don't have to get voice actors to record dialogue in different languages. Same thing goes for dialogue-less games like Abzu and Journey. They are significantly cheaper to make that way.

They throw in a bit of real language in but it is spoken very quickly.

It’s a lot of fun. But so far I’m not able to buy the 99 cent promotional pack. Fortunately I was able to earn enough leaves to buy a stool for KK Slider to sit on.

So far the game is more fun than I expected. And I had some high hopes for it. I’ve got a lot of friends but I can’t read their names. I used to be able to read Japanese and Chinese characters but my skills are so rusty.
Reactions: thisisnotmyname

Just started playing it yesterday and i made it to level 7 tonight. The game is just as I remember from when I played it on the Gamecube.
You must log in or register to reply here.
Share:
Facebook Twitter Reddit Email Link
Register on MacRumors! This sidebar will go away, and you'll see fewer ads.
Sign Up
Top Bottom