The Anki Drive game first demonstrated during Apple's WWDC keynote address in June is now available exclusively on the Apple Online Store and at Apple's retail outlets, in line with last week's announcement.

The game, described by Anki as a "video game in the real world", is somewhat similar to slot car racing, but uses artificial intelligence, machine learning, and iPhone-based controls.

The Anki Drive starter kit includes the vinyl "track" and two cars for $200. Two additional cars are available for $70 each, the red RHO, and the blue and gold KATAL.

Each Anki Drive car has its own unique name, personality, and statistics, with some offering greater acceleration speeds while others having more energy. There are multiple gameplay modes, including multiplayer and single player modes, with cars lacking a human controller using a proprietary AI system.

Anki will also be holding a series of special events at prominent Apple Retail Store locations around North America over the next few weeks, hitting San Francisco, New York, Chicago, Boston, and Montreal. 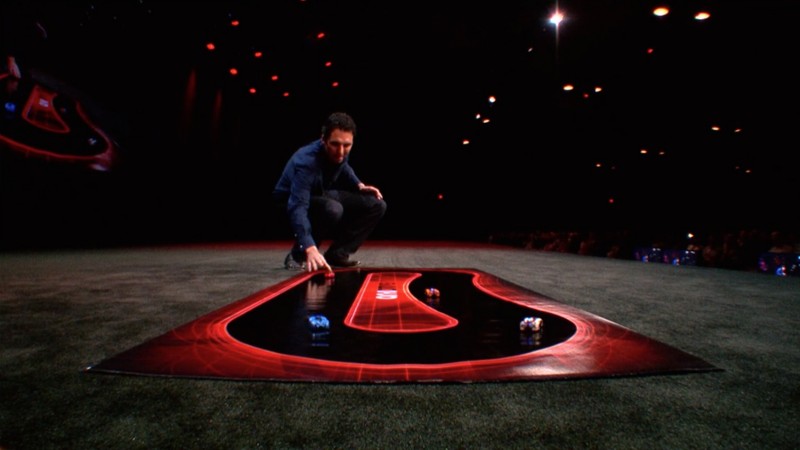 The Anki Drive app can be downloaded from the App Store for free. [Direct Link]

I can totally see Woz buying six of these things.
T

musika said:
I can totally see Woz buying six of these things.
Click to expand...

Two for every phone he has lol

I second that, loving this notifications !

still, for $200 I would rather buy a remote control car.

I would love to have this, but I don't have the space in my house for yet more toys...
B

Will they allow their customers to do the formations with the cars like they did at WWDC?

It's impressive but I feel their presentation was botched up by that hiccup they had. Who knows if that could potentially affect their sales.

These things are pointless toys.

Just like all toys and all fun are pointless. That's the point!

As a fan of toys and fun, I want them! (But I kind of want that remote control ball thing more.)

It would be fun to try making your own tracks, if that's possible (surely not easy) to any meaningful extent.

It's a nice toy, but IMO too expensive for what it does.
E

I'll wait till this is heavily discounted. Could be fun, but not 200$ fun.
L

I can see it in the USA Apple store but nowhere else. Looks like a USA exclusive for the time being .... doesn't quite feel right when you join in a global presentation from Apple and then limit your market - they will lose a lot of International Momentum after Xmas

I can definitely see these AI types of games, as a category, having great future potential. The prices will eventually come down naturally, and more importantly, these games will become much more refined and sophisticated, at which point I believe they'll have the potential to catch on in a big way.

Unfortunately only in the USA, it isn't available in the Dutch Apple store (yet)...
J

I didn't get enough information from the presentation and would have liked to see more of the app. How do they get "smarter". I think my son would love this. IDK about buying him a $200 toy right now. he's 4, but he does have his own iPod touch. (so does my 2 year old daughter)

Lazrhog said:
I can see it in the USA Apple store but nowhere else. Looks like a USA exclusive for the time being .... doesn't quite feel right when you join in a global presentation from Apple and then limit your market - they will lose a lot of International Momentum after Xmas
Click to expand...

I emailed them about the app not being available in non-US AppStores and they replied thusly:

Unfortunately, Anki DRIVE will not be available outside of the US and Canada this holiday season.

We do plan to expand internationally, but at this time we don't have any dates to announce. Please stay informed of product updates by signing up to our email list at http://www.anki.com or just check the website frequently.
Click to expand...