I'm getting ready to start summer teaching again, which is going to put me in a position of drawing a lot of structures. I'm teaching Organic 1 lab as well as "Nursing" chemistry(general, organic, biochemistry) and am also scheduled to teach Organic II lab for the next couple of semesters.

I'm getting tired of juggling files between my Quad and my Mac Pro so that I can use the old versions of ChemDraw that I've dug up, and instead and going to try and get the department to buy me a more current version.

What I'm wondering is what real-world difference I'll see between ChemDraw Professional and ChemDraw Prime, and specifically if I need to make the argument for the $1K price difference between the two. For organic labs, having access to the TLC plate drawing tool(apparently included in Prime) as well as the NMR predictor(which I know is in the version I'm using now, but not sure if I have to go up to Pro on the current) would both be very useful.

I'm trying to be budget conscious on this, and although I'm not spending my own money I don't want to spend to much money. At the same time, if there is a good reason to buy the better version, I need to be able to make an argument for it.

Do any regular users of these programs have any thoughts?
C

Have you looked into PerkinElmer's Discount Program? A couple of friends of mine are teachers - one is paying $50 for a ChemOffice Ultra license (for Windows, 1-year subscription) and the second is paying $40 for a ChemDraw license (for Mac, 1-year subscription). They're current versions. All you have to do is apply - one sent a link to the Discount web application:
https://scistore.cambridgesoft.com/ScistoreDiscount.aspx?Check=1

I'll do anything I can to support our teachers...

It's not as easy to use, ChemDraw for the iPad is only $10. A steal, and fun for me too (civil engineer with a background in environmental engineering and analytical statistics... - sssshhh, don't tell anyone).

Thanks for the links-I think I can afford that out of pocket!

Your welcome. A bit more feedback, understanding your Chair's position on this. A few schools I've volunteered for have sought out and received some funding through Indiegogo. I'll beat a few more bushes and see what else we can come up with!

I really hope that PerkinElmer can offer a suitable offer! They're great people to work with and offer awesome products.

If everything fails, I could suggest ChemDoodle as alternative. It hasn't all the features ChemDraw has and the UI is ugly (and un-Mac-like) as ****, but it costs significantly less than ChemDraw and is sufficiently compatible to it, so that you could use your old files.
Last edited: May 12, 2016
A

You might want to look at ChemAxon's MarvinBeans suite - nice interface, great for drawing but not as fully-featured as ChemDraw. Options for other add-ins. Free.

Thanks for the continued responses.

I have used Marvin products in the past, and unless they've changed I've found them clumsy and somewhat limited. In particular, the versions that I've used in the past wouldn't allow me to draw a complete reaction-I had to draw one molecule at a time and then transplant it into Powerpoint to fill in the reaction arrows.

I will look at ChemDoodle.

Unfortunately, the Perkin-Elmer offer came back at $495, which is too much to swing(the higher education discounts are a lot less than K-12 discounts).

I do try to "scavenge" as much as I can, so in that sense my requests for teaching supplies/equipment are pretty infrequent and limited to mostly classroom supplies (chalk/markers, Scantron cards, legal pads, etc) and the occasional textbook. I'm using a personally owned Mac Pro 1,1 as my office computer, although when I have the time(not now as I'm going to be working like crazy prepping for summer) I'm going to swap it for an '09 27" iMac that I "rescued" from IT and repaired. The fact that, despite being a full time department employee, I'm only a part time lecturer(i.e. I teach on contract from semester to semester as needed) makes it really difficult to justify this kind of purchase for me. I understand the chair's position, but it does mean I have to get creative sometimes.

As I mentioned, I do have several older versions of Chemdraw and Chem Office, but all are PPC only and some are old enough to not even be OS X native. Interestingly enough, with ChemOffice 2002, Chemdraw itself was carbonized(able to run on either OS 9 or OS X) but the other programs in the suite were OS 9 only. I wanted to use one of them to illustrate something in class a while back, so just non-chalantly hauled in my 1ghz TiBook, booted it into OS 9, and did what I needed to do.

In the worst case, I can continue doing what I'm doing now which is using Chemdraw and Office 2008 on my G5 Quad or one of the other PPC computers in my mini "museum" to write exams. This time last year-when I had just graduated-I was actually using the Quad as my main office computer and it got me through the hectic summer. Granted, as Dropbox seems to keep closing every loophole we manage to find to keep PPC computers connected, using the Quad is becoming more difficult(although the thumb drive "sneaker disk" still works).

The other option is to virtualize SL(I do have a copy of the server version, so can do this legally) and run one of my PPC OSX or Carbonized versions using Rosetta.

As an aside, our department does have a decent amount of Perkin Elmer around. Our AA, fluorimeter, the teaching lab HPLCs, refractometer, and main FT-IR(ATR) are all Perkin Elmer. I think a few research groups have some assorted PE instruments also. I have been known to complain about the FTIR on the basis of it not being a Nicolet(or Thermo-Nicolet now), but that's a personal preference . Given that we've been a good PE "customer" I might contact our rep and see what he can do. It's a shame VWR doesn't carry it-they are officially our preferred supplier(to the point that if we order something from any other source we have to document that VWR doesn't carry it or is substantially more expensive) and we probably run 7 figures a year in orders from them. Our sales rep-who I talk to at least once a week-has managed to work some amazing deals for us in the past.
Last edited: May 12, 2016

I've managed a workable and legal, if not particularly elegant solution.

As I suggested earlier in the thread, I set up a Snow Leopard Server VM within VMware(perfectly legal under Apple's EULA as long as I'm running it on Apple hardware). I have Chemdraw 9.0, a carbonized PPC application, running in the SL VM along with Office 2011. This at least gives me access to Chemdraw from my main laptop, although it won't completely replace using it on the Quad and its nice big dual monitors for when I need to do a lot of work. 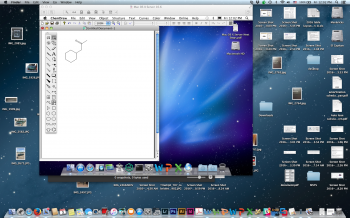