Resolved Any way to add an alias on Contacts?

This is mostly a trivial question, but just wanted this answered, since I haven't found a clear answer by searching.

In Contacts (aka Address Book), I noticed that there isn't really a place (outside the Notes), to insert if a contact goes by another name. There are at least two people on my contacts list that go by other names, and I would like to know if there is a way to register this.

Nickname.
On the contact, click edit, then the plus icon in the middle, then more fields > nickname.

I see it, but I doubt nickname would be the same as a pen name or an alias. I wonder if Apple would consider adding it in a future update.

How do you want to use this?

I use nicknames and can search for contacts based on either, and also write emails/SMS by searching either name.

furcalchick said:
I see it, but I doubt nickname would be the same as a pen name or an alias. I wonder if Apple would consider adding it in a future update.
Click to expand...

Go to this screen in Contacts prefs and select Custom at the bottom and you can add whatever field you want. I added Alias in the second screenshot. 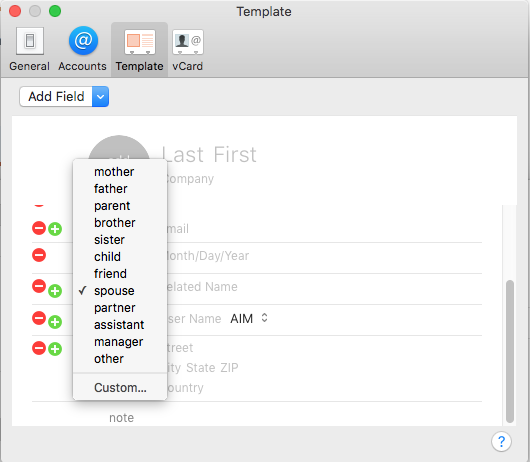 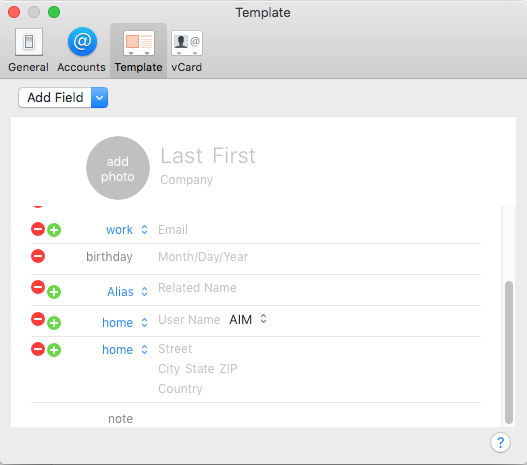 Thanks for the help everyone!
Reactions: Weaselboy
A

furcalchick said:
I see it, but I doubt nickname would be the same as a pen name or an alias. I wonder if Apple would consider adding it in a future update.
Click to expand...

A rose by any other name... Why would a field named "nickname" have to be used differently than "pen name" or "alias?" It's purely a matter of how you use the field. Siri isn't going to shout, "Mark Twain is not a nickname, it's a pen name!"

iOS Settings/OS X Contacts Preferences have an option to Prefer Nicknames. So if you used Nickname for pen names (and used that option), then "Mark Twain" would appear in the lists in Mail and Messages rather than "Sam Clemens." Might cause problems for you, might not.

Sure, you could choose to use Nickname in a way that precludes also using it for pen names or aliases. I guess if you're a literary agent or a movie-style gangster, you might need to make that distinction. I'd imagine Samuel Clemens' literary agent thought of him as "Sam," not "Mark." And if "...Her name was McGill, and she called herself Lil, but everyone knew her as Nancy," you'd have some decisions to make. In those cases, perhaps I'd use the Notes field as well.

There's another way to approach this (and I'm sure, more than one)... create a separate Contacts entry for the pen name or alias, and use Related Name to cross-reference. It's not my choice, though, since we're still talking about one person - one-person-one-contact is a more reliable way of ensuring that all info is correct and complete.

One way or the other, I don't think your desire is going to appear in a future software update - there are probably hundreds of thousands or millions of fields that might be created - some people might want fields for Favorite Drink, Eye Color, Political Party... but that's how we end up with bloatware.
You must log in or register to reply here.
Share:
Facebook Twitter Reddit Email Share Link
Register on MacRumors! This sidebar will go away, and you'll see fewer ads.
Sign Up
Top Bottom