Anybody likes to show off their DIY PC/Hackintosh here? 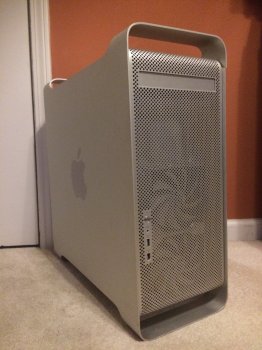 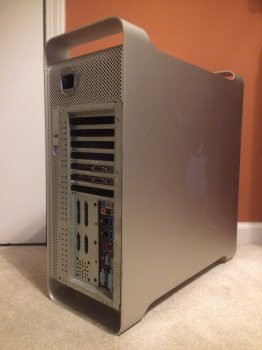 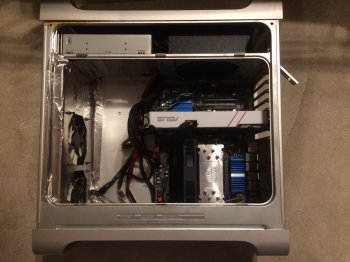 Just to be clear this isn’t a Hackintosh but a Frankenmac. It runs Windows. It’s my Powermac G5 ATX conversion.

The front panel including LED are all wired. But I just use the power button, LED and USB. On my old motherboard the Firewre and audio jack worked but the cables don’t reach on the new board. I’d extend them but have no reason to.
Reactions: three, Ploki, UmarOMC and 1 other person

I think in most cases you'll find that they look strikingly similar to builds running Windows or Linux.
Reactions: maflynn, eltoslightfoot and Luap

BrianBaughn said:
I think in most cases you'll find that they look strikingly similar to builds running Windows or Linux.
Click to expand...

I built a hackintosh in a Fractal Design Node 202. It's more or less the smallest budget mini-ITX case that still fits a large GPU card. I wanted the pizza box design so that I could hide it vertically behind the TV.

It boots OSX fine, but I haven't booted it to OSX in a long time. Now it runs Win10 full time, and runs OSX in a VM on top of Windows. The OSX VM is far easier to look after than having a boot partition, and because it's OSX, raw speed / game-playing isn't a concern anyway. The OSX VM looks after keeping a local copy of my family iCloud files - we have the 2TB option - and all our photos, just in case iCloud drops.

It was also supposed to run Time Machine to backup our laptops but that sometimes doesn't work, and given how well iCloud works nowadays, Time Machine has dropped way down my list of priorities. I had also hoped to get iCloud local cache working in the VM but Apple seem to be dead against letting hackintoshes and VMs activate that particular service. All in all, I'm happy with what I have, and even in a VM it's both the cheapest and most powerful Mac I have running.

On the windows side, there's enough power to run my VR equipment while still keeping the OSX VM running, though I sometimes shut down the VM if I want every last bit of power. 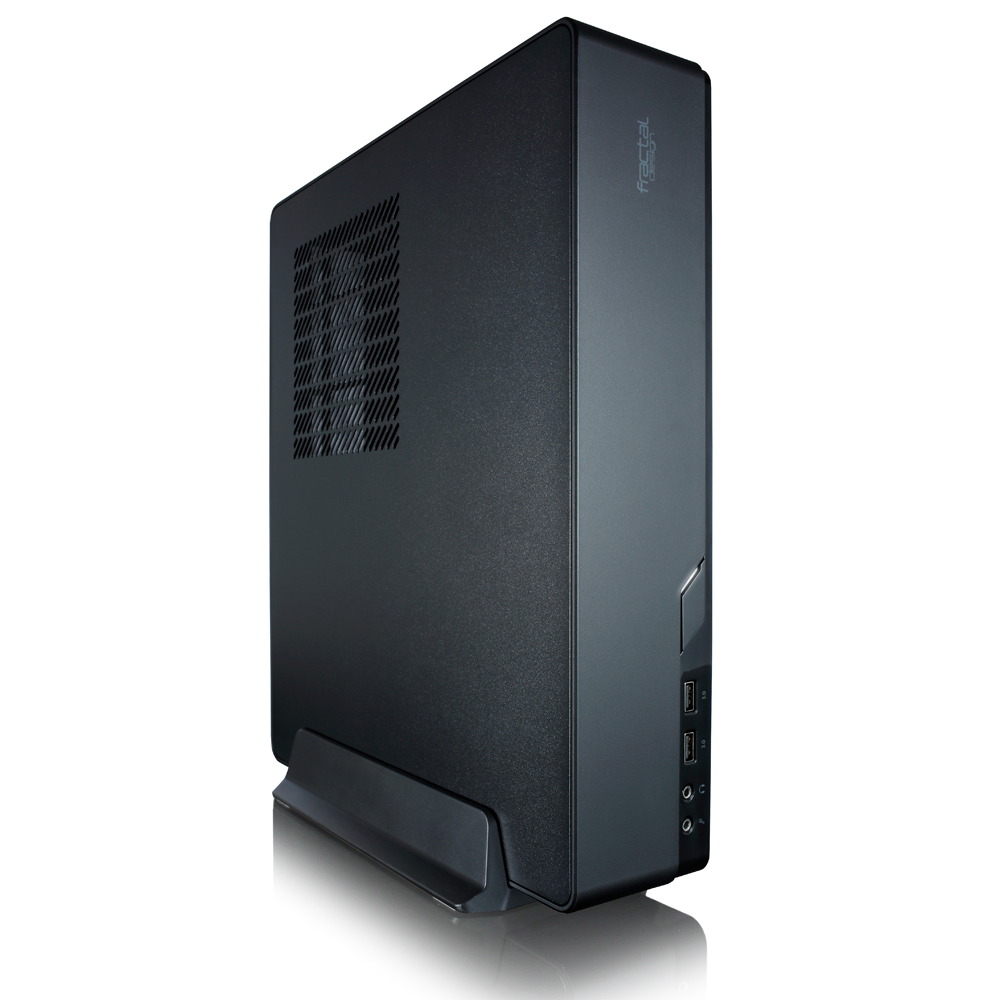 RedTomato, what are the specs on your box?

Flint Ironstag said:
RedTomato, what are the specs on your box?
Click to expand...

Whatever used stuff that I could get cheaply and locally. I ended up with:

- Gigabyte GA-B150N Phoenix
- Intel i3-6100
- 8GB DDR4-2133 to start with then I added another 8GB later
- the i3 has its own integrated graphics, then I added a Nvidia 1050, then later upgraded to a 1060 6GB
- a hackintosh compatible USB bluetooth dongle
- the mobo didn't have a wifi card, which is why it was cheap, but most wifi cards aren't hackintosh compatible anyway. I use ethernet with it anyway.
- various bluetooth keyboards and mice and controllers. Currently on a Logitech K830 HTPC keyboard, which I hate but the kids don't mind using it, so I haven't bothered to replace it yet.

When I built it, I followed the tonymacx86 compatibility guides, but if I was doing it again, I wouldn't bother, I'd just buy Intel whatever then run OSX in a VMWare VM. I say Intel because even with a VM, it's much easier to set up an OSX VM on Intel than on AMD. There are various guides if you google.

I rarely sit at the hackintosh as it powers the TV. I usually remote in from my Macbook Air via Microsoft Remote Desktop if I'm in the same house, and sometimes via TeamViewer if I'm outside the house. I quite enjoy that I can have OSX on Windows on OSX running on my Macbook Air

If you expect to have kids or a partner watching TV / using the computer while you remote in, Windows 10 can be modified (google RDP Wrapper) so that you can remote in and do your stuff at the same time as your kids are playing minecraft or roblox - without interfering with their game.
Reactions: Flint Ironstag

RedTomato, I have followed many a TonyMac guide, and love my beast. However, I am intrigued by the idea of being able to virtually boot Mac instead. Did you follow any particular guide, and what VM software did you use in Windows?
H

9700K based Hackintosh above and 9900K based Windows 10 (Maximus XI). I picked an Asus Z390-I mITX mainboard based on one of the success stories on Tonymacx86.

I did use a Mojave VM to create a bootable USB thumbdrive with Multibeast. But it was no fun using it. I ran it in VMWare on my Surface SP6 which only has 8Gb. Make sure you allocate enough memory! 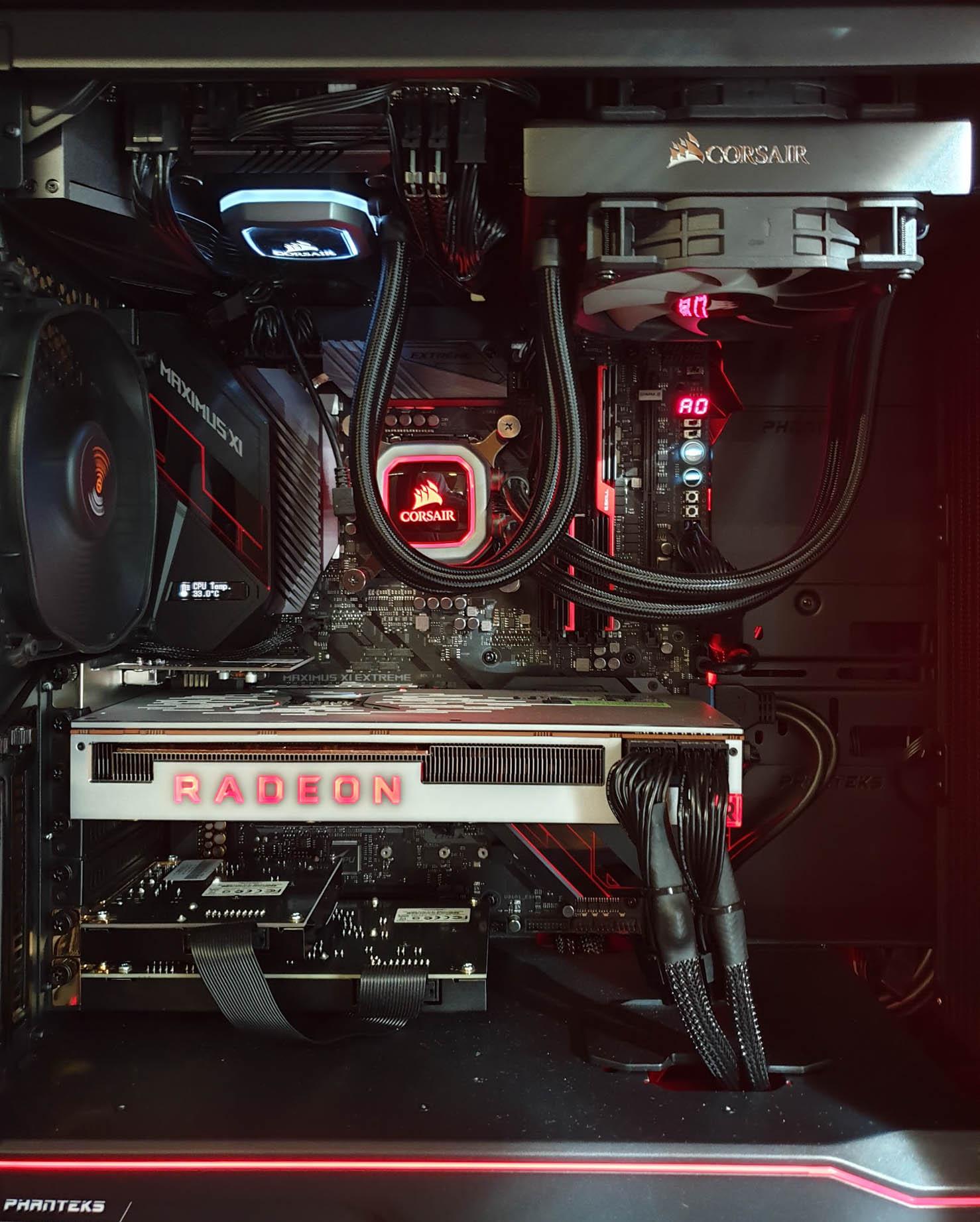 eltoslightfoot said:
RedTomato, I have followed many a TonyMac guide, and love my beast. However, I am intrigued by the idea of being able to virtually boot Mac instead. Did you follow any particular guide, and what VM software did you use in Windows?
Click to expand...

I use VMWare Workstation Pro, but VMWare Player will work fine & is free. Don't really like VirtualBox. There are several online guides, I think I took tips from most of them.

The Ars Technica thread has a lot of info. I mostly used https://www.pcsteps.com/2157-mac-os-x-virtual-machine-vmware-player/


HomeLate said:
I did use a Mojave VM to create a bootable USB thumbdrive with Multibeast. But it was no fun using it. I ran it in VMWare on my Surface SP6 which only has 8Gb. Make sure you allocate enough memory!
Click to expand...

My ITX box only had 8GB too, but it ran the VM fine - I gave the VM 4GB which was enough. I think the SSD and memory gave a smoother experience than on your Surface.

Using a USB drive for a VM is cack, the USB interface can't deal with the thousands of small files that an OS touches every second. Only for emergency use. A decent SSD on USB3 is OK for limited use, some people permanently boot their iMacs from external USB3. Firewire or Thunderbolt would be better. The limit isn't peak transfer, it's random small file transfer, which even on a high-end NVME M.2 SSD peaks at about 50 MB/sec.

I don't really use the VM for 'serious working' on OSX - it is more to run backups etc. The Ars thread talks about passing the GPU through to the VM - I've never tried that. Steam Home Streaming on Win10 is able to stream the GPU on the ITX box to my Macbook Air for any Steam game which is enough for me. I haven't really tested it intensively, no time to catch up on my Steam backlog.
Reactions: HomeLate and eltoslightfoot

I've been dissatisfied with Apple's high end offerings for a while; crippling eGPU on nMP was the last straw for me. I hired a guy (sharp but not always available) to Hackintosh several loaded Z820s for me at the shop. Since I maintain my own infrastructure though, I wanted to learn how to do it myself. It took a while.

Ideally this would all be running on ESXi, maybe someday. It's far from complete, but this is the 1st time I've been able to boot to a functional desktop. Here's what doesn't work: internal drives, USB3 ports, ethernet, sound, thunderbolt. I'm sure there's more, but I'm enjoying a small victory here.

No one method worked for this box - I had to hit countless websites, using one method here, another there, to get this far. Every. Single. Thing. needed tweaking.

This post is part thanks, part encouragement to others, and now that it's public, part motivation for me to see it through and iron out the quirks. The jury's still out on whether or not it's feasible for me to roll out more of these for the shop. I'll need to live with it for a while (the ones I paid to have done are rock solid screamers).

Excuse the dusty, half disassembled box and the mess of cables. 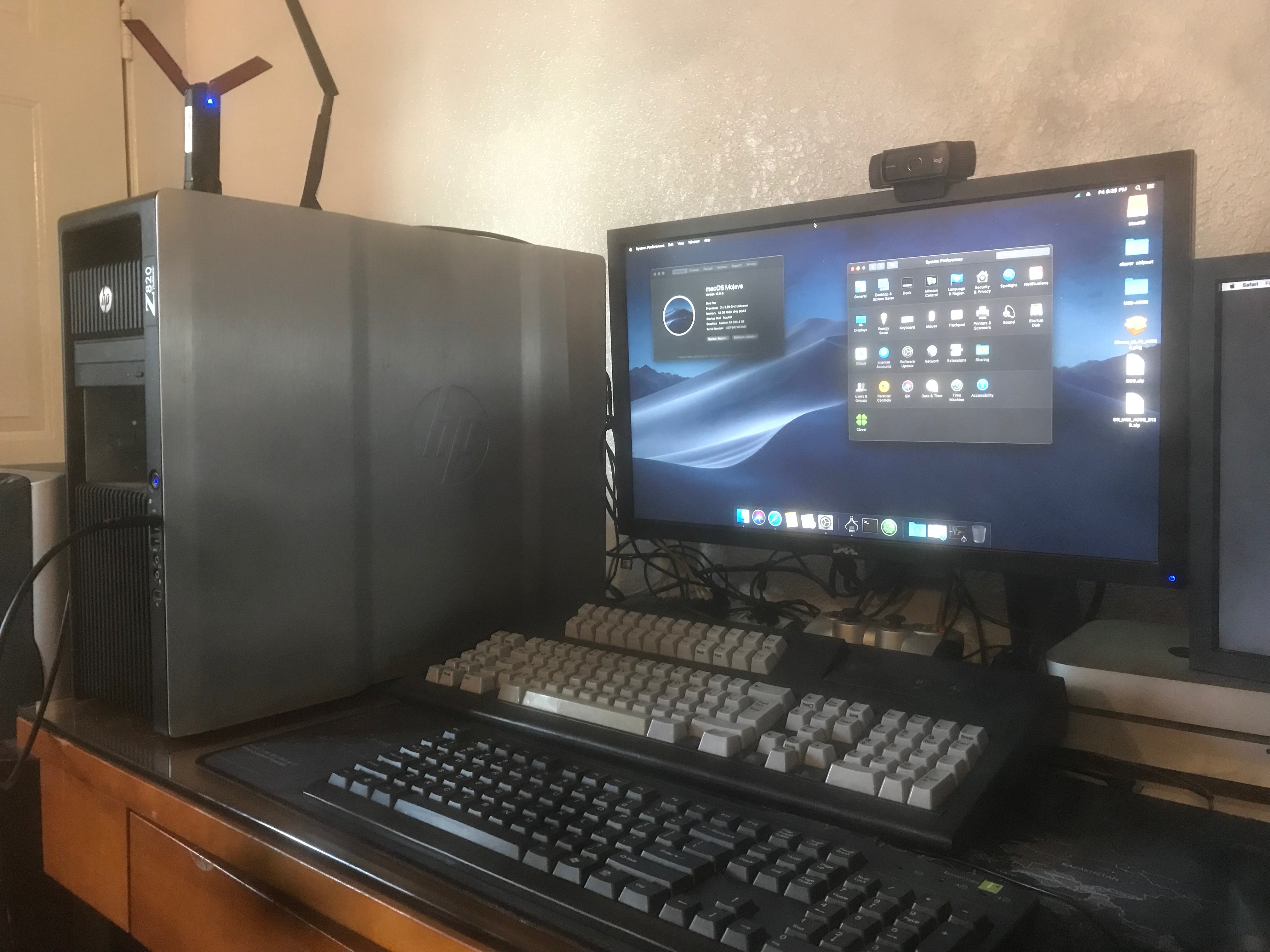 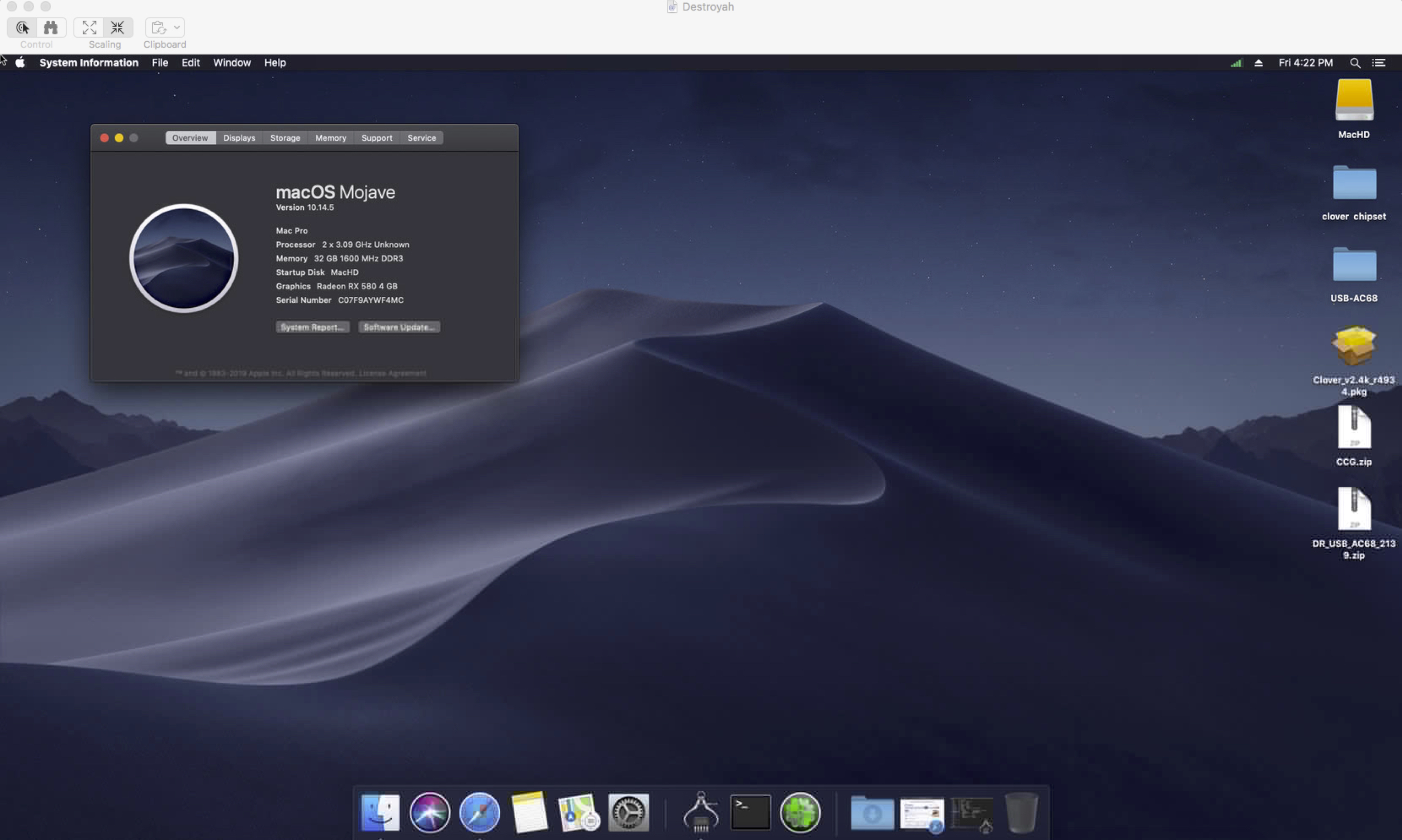 Flint Ironstag said:
I hired a guy (sharp but not always available) to Hackintosh several loaded Z820s for me at the shop. Since I maintain my own infrastructure though, I wanted to learn how to do it myself. It took a while.
Click to expand...

You picked a really difficult system to hackintosh. I'd be very concerned about the long-term maintenance, especially for a work machine where any issue costs money. Any reason you didn't just go for buying a used package of high performing but highly compatible components from TonyMacx86?

Ideally this would all be running on ESXi, maybe someday. It's far from complete, but this is the 1st time I've been able to boot to a functional desktop. Here's what doesn't work: internal drives, USB3 ports, ethernet, sound, thunderbolt.
Click to expand...

To me, that's a long way from a worksafe machine, but I guess if what you have meets your needs, it's fine. Are you running in VM or native? I got all these things (except thunderbolt) working pretty easily, both in VM and native, but I picked a compatible mobo (mine doesn't have TB anyway). It shouldn't be a struggle.

For VM, I had trouble assigning a partition on my storage HDD to the VM. (the VM itself is on SSD) I eventually gave it an entire HDD for itself, but it's still a bit fragile and I had to hide the HDD from Windows while still ensuring the VM picks it up. A lot of reformatting was involved till I found a setup process that works.

EDIT: What you could do is either move to VM only, or sell your motherboards & buy more compatible ones from the TonyMac list & move everything over. (Hopefully you won't need to buy new processors too.) Given you're happy with a 1030 GPU, moving to VM under Windows or Linux might work.
Last edited: Jun 10, 2019
Reactions: eltoslightfoot

The one I'm doing is miles away from being in production. The slightest change or addition sometimes renders the system unbootable. I'm definitely concerned about long term usability. The ones I paid for are in a fixed configuration and just crunch data 24/7. Haven't had a single problem with those. Uptime in months now at near 100% CPU / GPU load.

I used the Olarila Hackintosh method as I could never get ESXi to work. Over the weekend I got sound, 1 ethernet port, and wifi to work.

I went with the Z820 because I like them and had some on hand. The energy & medical sectors here churn hardware regularly - good for cheapskates like me! I may sell this one and see if there's an approved dual xeon build. I was hoping for MP 7,1 to start at maybe $4k, but I don't think I want to pay $6k for the base configuration.

Bet I could build a mean Z8 for $4k. In the end though, I know I want my personal box to just work, and based on this experience (I know, unsupported hardware but still), there might just be MP 7,1 in the future. 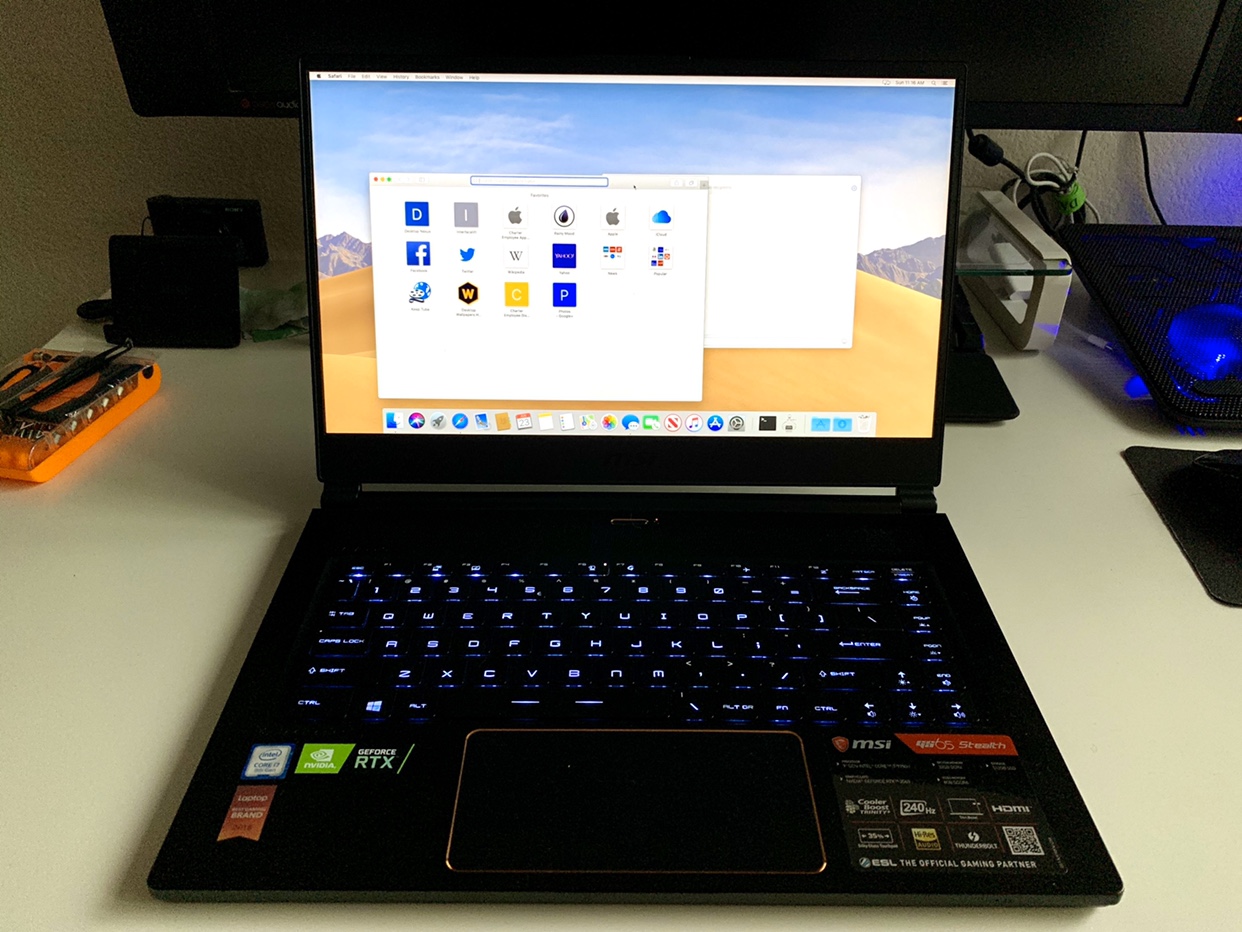 Impressive! I assume it is only using onboard video. (Which would be just fine for most things...)

eltoslightfoot said:
Impressive! I assume it is only using onboard video. (Which would be just fine for most things...)
Click to expand...

Yup, no hardware acceleration but at least it works

You need to remove all those stickers

maflynn said:
You need to remove all those stickers
Click to expand...