Can someone who has dual boot Mac Osx with Ubuntu shed some lights on the procedure ? Thanks.

It really depends on which Mac you have, whether you are going to install on a separate drive or not, etc.

But this is a good place to start:
https://wiki.ubuntu.com/MactelSupportTeam/CommunityHelpPages
Comment

I dual boot a Mac Pro (5,1) with OpenSUSE. reFind is your friend. The most problematic issues are usually related to graphics, and that depends on your hardware, which you didn't specify. If the page listed by ActionableMango doesn't suffice, come back here with some specifics and I can try to help.
Comment
R

I actually got it working today on my 2015 rMBP 13". Works fine, it was pretty easy to install too. Fans seem to be kicking on automatically when needed, which was a surprise.
Comment
R

I followed that, but for the bootloader part, instead of the efimanager I used rEFIND:
https://sourceforge.net/projects/refind/
Comment

I'm actually using opensuse, not ubuntu, but the distro shouldn't matter. You should be able to run the very latest distros and kernels on that hardware just fine. I run kernel 4.4 (just a few months old) on Mac Pro (4,1)->(5,1) hardware with no issues at all, and that setup is older than yours.

Graphics drivers are usually the biggest problem. Your machine has the Nvidia 320M, if I'm not mistaken. That's what the linux builtin "nouveau" driver calls the NVAF in the Tesla (NV50) family, and you shouldn't have too much trouble with that. Alternatively, once you get the basic install going, you can install the nvidia.com supplied driver, which may work "better" especially for video, but doesn't always play nice with the very latest kernels. If you don't keep up with the latest kernels (note, kernel version is not the same as distro version), you can use the nvidia blob driver and it should be fine.

I don't know the step by details on a macbook pro, but the install generally goes something like: install OSX leaving aside a disk partition for linux, install refind, install ubuntu telling it to NOT reformat the whole drive and to use the partition you set aside. If necessary install Nvidia graphics driver. Done!
Reactions: ajay96
Comment
A

Yup it was pretty easy. I didn't have to install any extra graphics drivers, i only have the integrated Iris.
Comment

So "pretty easy," that's encouraging… and relieving as I never dealt with Linux before. Should it be the case as well with Solus OS? It runs on a Linux Kernel 4.4.3.

Somewhere between the buyer's guide and the forums

Ubuntu isn't bad, requires some edits to system files, I remember back when I attempted it (a long time ago) with Ubuntu 10.10, I had to make a few changes to get my NVidia card working semi-decent, and had to make another change to enable fan support. It's been a long time ago, but I can tell you I found all my answers in the Ubuntu community forums.

If you are comfortable making .conf changes and come prepared before you install it should be no sweat, maybe 15 lines of code did it for me.
Comment

You intend to erase W10 and install Linux in its place?

If yes, I would use the Bootcamp utility to erase Windows and reclaim the space.
Then use the Disk Utility to create a new partition as MS-DOS FAT (lets say 50GB) for your Linux install. Make a bootable USB with the Linux distro of your choice (I use Unetbootin to create bootable usb).
Reboot your Mac and hold down Option key after you hear the chime. I think you should see 3 or 4 options. One is Yosemite, then recovery if you have it, the next one should say Windows (Mac thinks it's Windows because it's FAT32), and last will be EFI. I prefer to install Linux in UEFI so I would choose the EFI boot option.

Boot into Linux, start the installation process. You will be asked where to install it. For some reason for me Linux Ubuntu or Mint were never able to see OS X so they asked if i wanted to erase disk and Install Linux. I chose the "something else" option. There you should see all the partitions of your hard drive. Remember which one is the one you made for Linux (lets say the last partition with 50GB space).
You need to create a "/" partition which is a root partition or otherwise you won't be able to advance. You can create additional 'home' partition if you would like too but it is not necessary.
After you create the root partition, select it and hit continue. Installation process begins and it only takes a few minutes.

After installation is done and computer re-boots, you won't be able to see the new Linux install. You either have to modify some boot file in OS X (which I never messed with) or install a bootloader like rEFInd while in OS X.

@Fancuku, thank you very much for such a detailed reply. Following your wisely advice, I nuked the Boot Camp partition and set a new 100 GB FAT32 partition where to install Solus OS.

Now, I have stumbled upon this dialog where I refuse to go forward for I understand it would delete the 'whole' disk, Mac partition included which, obviously, I won't like to. Or am I mistaken here? -hopefully so-

Thanks once again for your time and attention. 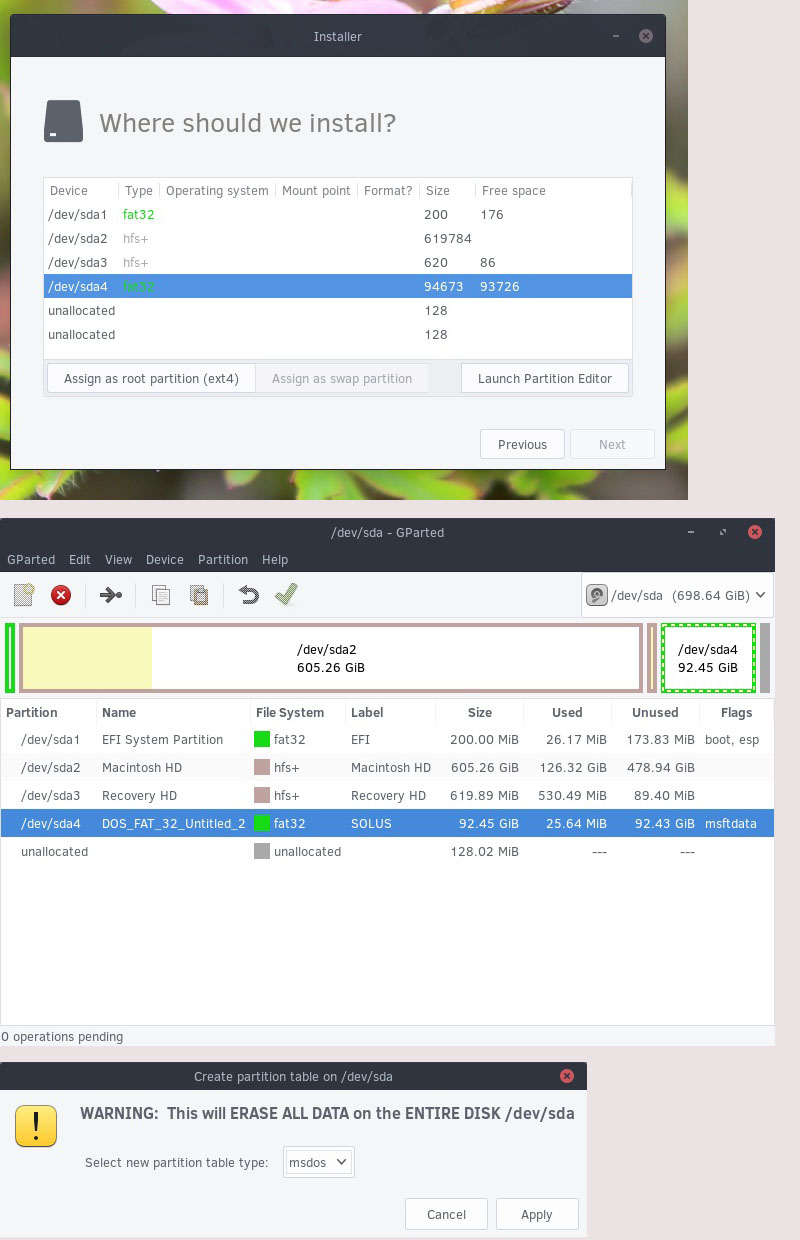 In the first screenshot, you have highlighted the correct partition sda4, next just click where it says 'Assign as root partition (ext4). That's all you need to do I believe.
Let me know if you still get the warning message about erasing data on the entire disk.
Reactions: Dorothy Gale
Comment

And that worked! Now, there is only one option listed where it should install the boot loader, /dev/sda1, a.k.a. the EFI System Partition. I understand the Installer is smart enough to get it right... correct? 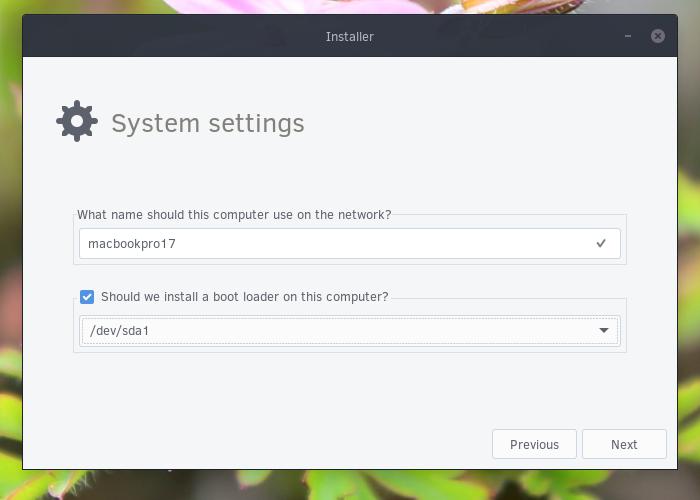 Yes, that's the EFI partition. I would leave it as is and continue with the process.
Reactions: Dorothy Gale
Comment

And it's already up and running! Thank you so much!
Comment

Dorothy Gale said:
And it's already up and running! Thank you so much!
Click to expand... 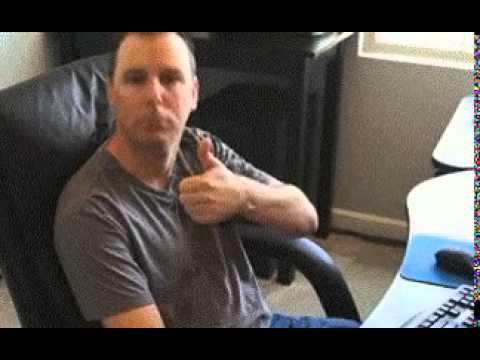 If you have any problems just delete your new efi folder (like refind) created for this purpose (but keep the basic one), just install refind on an usb key and run the linux installer on an other usb key, loaded with mac linux usb loader (work fine).
On somes distributions you'll have to change some line in a file of the efi folder of the linux usb installer to make it work.
Comment

rEFInd installs in the OS X EFI folder. Linux will have it's own EFI folder in the partition it was installed. No need to delete anything in my opinion.
Comment

i mean delete refind if it's buggy. it is sometimes. works better on usb.
delete where refind is, in the efi-->EFI-->refind if it's there. this solution just have the consequence to "uninstall" refind boot loader.
Comment
R

Fancuku said:
rEFInd installs in the OS X EFI folder. Linux will have it's own EFI folder in the partition it was installed. No need to delete anything in my opinion.
Click to expand...

Your previous link http://www.rodsbooks.com/refind/installing.html which one to choose for OSX on the left panel ? could you elaborate a bit ?
Comment

sometimes the "esp" name is "EFI". be carefull of that.
if you want to test refind just set it on an usb key with the method mentioned on this page, and boot from that key, it will give you more options.
basically this page could work but for some mac you'll have to configure a little and search. some linux distros efi have to be modified to work on mac.
Comment