Twitter has been taking the world by storm in the past few months, making headlines with major traditional news outlets and drawing more and more celebrities to its ranks. Multiple Twitter apps are frequently listed in the top selling lists in the App Store, both paid and free. Recent additions and updates to existing Twitter apps in the App Store allow users to even upload videos and voice recordings to share with Twitter followers. There is one sharing route that hasn't been exploited much quite yet, however.

Before, sharing title and artist information for a song you're listening to in the iPod application on your iPhone or iPod touch required you to painstakingly type it out by hand in your favorite Twitter app to share with your Twitter friends. Now, thanks to one of the many new APIs added to the developer SDK announced earlier this year, apps can now pull information directly from the iPod application, making an app like TuneTweet by JBB Productions possible. TuneTweet is just one of a handful of apps that currently offer the ability to publish the title and artist information of whatever you're currently listening to on your iPhone or iPod touch directly to your Twitter account. 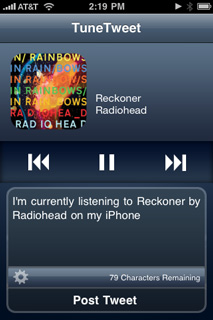 TuneTweet also offers some basic playback controls, allowing you to pause/play or skip forward or backward to the next and previous songs in the current playlist directly in the app. The tweet that's automatically populated with the current title and artist information can be edited further and there's a counter showing the number of characters that can be added to stay under the 140-character limit. Since the automatically-generated title and artist information can be deleted completely, it's also possible to use TuneTweet as a simple tweet publisher. 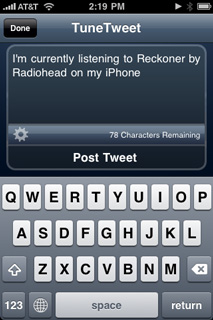 Twitterers who like to share their music and podcast activities with their followers will be happy with how easy TuneTweet makes this task. TuneTweet can be found here (link opens iTunes) and is currently priced at $.99.

MacRumors said:
Twitter has been taking the world by storm in the past few months...
Click to expand...

Maybe the Twitter denial of service overload was actually a "demand for service" overload!

I can't use TuneTweet because people would tease me for having both Marilyn Manson and Corinne Bailey Rae in my playlist.
Comment

I can't use TuneTweet because people would tease me for having both Marilyn Manson and Corinne Bailey Rae in my playlist.
Click to expand...

I wouldn't tease you for the Marilyn Manson. Corinne Bailey Rae, on the other hand  maybe. But then you could tease me for Barry Manilow (Copacabana) so we'd be even. Or maybe not.
Comment

This would be a great app if it wasnt limited to the ipod playback.
I personally hardly ever use the ipod part of my iphone thanks to all the streaming options.
Once Spotify is released (if it gets approval) then that will make my last statement even more solid.
Comment

qTweeter? Now that sounds much better. I'd pay a dollar more just for the Q in the application name.

I would place all bets on http://www.jamWee.com for a similar app to be released one day.
Comment

Doctor Q said:
qTweeter? Now that sounds much better. I'd pay a dollar more just for the Q in the application name.

agreed, nobody wants to know every song you're listening to on your iPod.
Comment
E

OH NOW MY LIFE IS COMPLETE!!!! waste of blog, I dont get the whole twitter crap. The tonight show with conan obrien does this skit twitter tracker and it is by far the funniest thing ever and they quote the stupidest quote from celebrities...
Comment

Twitter, itself, has been sitting still too long now. Twitter needs to upgrade their service. Instead of having to have a whole new tweet to tell people what song you are listening to, people should be able to type a full Twitter message and ALSO have a button/link people can click on that shares the song info. Instead of having to have a link to a TwitPic, Twitter needs to let people type a full message and then have a button/link that people can click on to go to TwitPic.

Why would anyone care that you are listening to a certain song???
Epic fail.
Comment

In A Galaxy Far, Far Away

This is a very good question medicrx, which I will try to answer.

One day, in the not too distant future, when our brains have been fried and only our thumbs still work, we will be able to visit virtual museums in which the entire Twitter record of Tweets is available on neural download.

Until then, millions of fools are busily engaged in adding content, and therefore creating the content of that future archive... nothing more.

I urge all Twitterers to add © symbols at the end of every Tweet. The effect of this will be two-fold:

1. Your descendants will never have to work because they will inherit the rights to your Tweets, and will therefore be able to live of the royalties.

2. The lawyers will still have something to sue for.

Fake Tweet:
I'm currently LOLing at my own humour and listening to 'Computa' by The Mentalists, thus proving the futility of resistance.

medicrx said:
Why would anyone care that you are listening to a certain song???
Epic fail.
Click to expand...