Cloudflare has today announced that it has developed a new internet protocol, in collaboration with engineers from Apple and Fastly, focused on privacy (via TechCrunch).

The protocol, dubbed "Oblivious DNS-over-HTTPS," or "ODoH," makes it more difficult for internet service providers to know which websites users have visited.

When visiting a website, browsers use a DNS resolver to convert web addresses into machine-readable IP addresses to locate where the page is located. However, this is an unencrypted process and ISPs can see the DNS query and conclude which websites their users have visited. Internet service providers are also able to sell this information to advertisers.

Innovations such as DNS-over-HTTPS, or DoH, have added encryption to DNS queries. While this may dissuade bad actors who may wish to hijack DNS queries to point victims to malicious websites, DNS resolvers are still able to see which websites are being visited.

"What ODoH is meant to do is separate the information about who is making the query and what the query is," said Cloudflare's head of research, Nick Sullivan.
Click to expand...

Page loading times and browsing speeds are said to be "practically indistinguishable" when using the ODoH protocol, according to Sullivan.

However, ODoH is only able to ensure privacy when the proxy and the DNS resolver are not controlled by the same entity. This means that ODoH will depend on companies offering to run proxies, otherwise the "separation of knowledge is broken."

While a few unnamed partner organizations are already running proxies, allowing early adopters to use ODoH using Cloudflare's 1.1.1.1 DNS resolver, the vast majority of users will have to wait until the technology is directly baked into browsers and operating systems.

Though it will likely first need to be certified as a standard by the Internet Engineering Task Force, considering that Apple was directly involved in developing the technology, it is not unreasonable to expect Apple to be among the first to integrate it in the future.

SO i can use it right now by just changing my DNS to 1.1.1.1?
Reactions: chabig, SqlInjection and EmotionalSnow

Fantastic news, looking forward to seeing this being rolled out to Safari. It being on Cloudflair covers a good half the internet.
Reactions: BWhaler and EmotionalSnow

No. That’ll change you to DoH, if your resolver supports it. ODoH isn’t yet implemented anywhere.
Reactions: Santiago, BeefCake 15, CouldBeWorse and 5 others

Today we are announcing support for a new proposed DNS standard — co-authored by engineers from Cloudflare, Apple, and Fastly — that separates IP addresses from queries, so that no single entity can see both at the same time.
Click to expand... 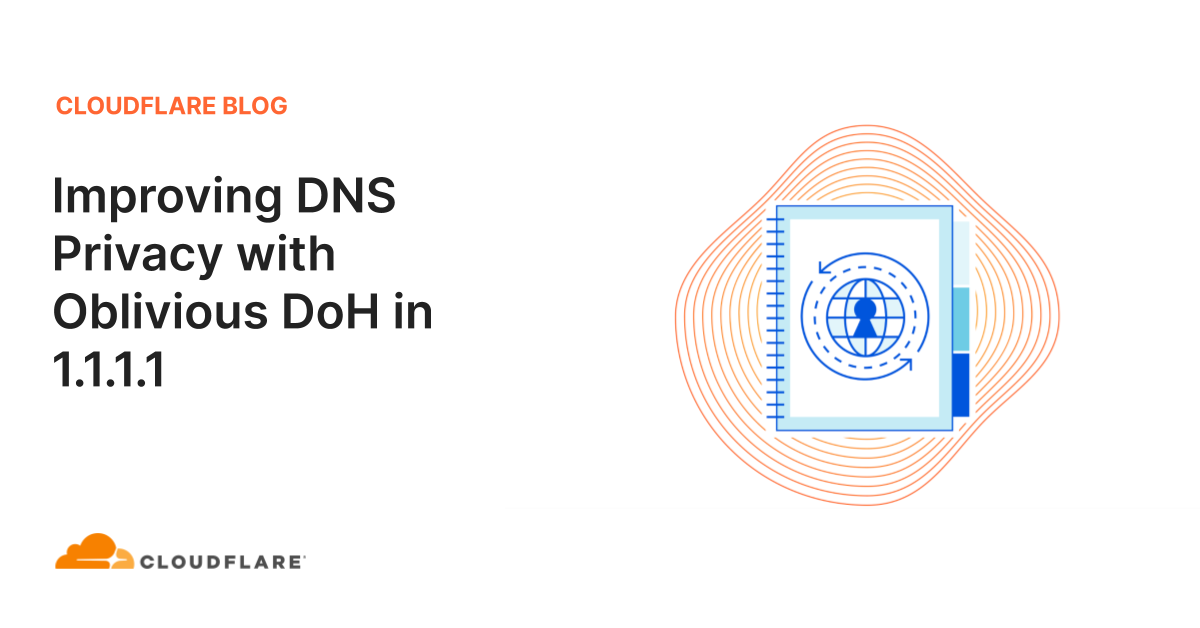 Oblivious DoH (ODoH) makes secure DNS over HTTPS (DoH) queries into private queries which prevent the leakage of client IP addresses to resolvers. The new proposed ODoH standard addresses this problem and today we are enabling users to use this protocol with 1.1.1.1

And I *just* started using CF's WARP+ on my phone and Mac yesterday! It's a user-space Wireguard VPN to CFs closest edge presence to you, with dns resolved on their super-fast DNS 1.1.1.1. LOVE IT!
EDIT: WARP+ goes beyond what this article is about, btw, and is available today.
Reactions: wolfshades and Airforcekid

As a NET shareholder I welcome this news with open arms.
Reactions: acgmph
H

And businesses will know how to configure their MITM-proxies to prevent (O-)DoH or DoT anyway; this will just help the likes of BlueCoat.

You have to trust the resolver and if you have content filtering in use that uses DNS based filtering, this is not a good thing. That said, I have found cloudflare to be very fast and secure. Since I do use content filtering and ad blocking, I use pihole with unbound and it has been great.
Reactions: EyeTack and locovaca

I have one of their cookies (fastly.net), or data, stashed on my iPhone and I cannot delete it no matter how many times I try to in Settings - Safari - Advanced - Website Data!
T

Unsupported said:
Who TF is "Fastly"?
Click to expand...

only one of the top three CDNs on the planet.
Reactions: rafark, aero7, idmean and 4 others

thederby said:
only one of the top three CDNs on the planet.
Click to expand...

Why can't I delete their data or cookie or whatever it is from my iPhone?

If this is their idea of respecting my privacy choices I am not impressed.
Last edited: Dec 8, 2020
P

Hello,
As far as I understand, big sure offer DoH but no encrypted SNI (which defeats the purpose). Anyone managed to get encrypted SNI to work using Safari : Firefox offers it within the browser, safari would require a profile (system wide approach) but I don't manage to encrypt SNI when using Safari and after installing a profile. FYI: This can be tested here : https://www.cloudflare.com/ssl/encrypted-sni/
Anyone managed ?
Thanks !
M

Unsupported said:
Why can't I delete their data or cookie or whatever it is from my iPhone?

If this is their idea of respecting my privacy choices I am not impressed.
Click to expand...

Unsupported said:
I use OpenDNS

That doesn’t protect you from your ISP’s eyes and selling your browsing data. Ali and Bob in tech support still know you’re into dwarf domination cosplay.
Reactions: Cognomen, KeithBN, ZZ9pluralZalpha and 5 others

I already have AdBlocker.

My question is why can I not delete the cookie, or data or whatever TF it is?
Reactions: centauratlas
L

370zulu said:
You have to trust the resolver and if you have content filtering in use that uses DNS based filtering, this is not a good thing. That said, I have found cloudflare to be very fast and secure. Since I do use content filtering and ad blocking, I use pihole with unbound and it has been great.
Click to expand...

Yup, and now we’re running into the issue of apps and devices that ignore DNS servers offered up by your router and instead hardcode Google or others so they can defeat DNS based add blockers. This is just another attempt to keep ads working under the guise of “security.”
Reactions: EyeTack, ZZ9pluralZalpha, ohio.emt and 2 others
H

ArPe said:
That doesn’t protect you from your ISP’s eyes and selling your browsing data. Ali and Bob in tech support still know you’re into dwarf domination cosplay.
Click to expand...

Technically correct; however, the most talkative devices are possibly the television sets and Smarthome-IoT-boxes. On top of that, a large part of Internet connections are used by more than one person. So in my case (I've got an internal DNS server anyway, but the ISP still sees the DNS queries the server passes on) that would be a family of four, a Samsung TV (big mess!), some game consoles.

I'm not sure if the resulting profile is really worth a lot, at least not commercially....

Apple will most likely implement this in the OS, so…
Reactions: centauratlas, xmach and chabig

Am I the only one here ? ODoH holding the door against bad ISP guys ?

No you will need the 1.1.1.1 app but I recommend checking out nextdns.io as well way more robust but any DOH provider is a massive upgrade over traditional UDP DNS.

I wonder how this will affect PiHole setups in the future.

I recently installed PiHole on my home network and it's been a very eye-opening experience. The amount of requests all these smart devices and various apps put out is amazing.

I know it is very unpopular around here, and I've been raged-against on this forum, but I think having metered internet connections where we pay per GB or MB would really incentivize all smart device manufacturers and app developers to be as efficient as possible with data, and be best in the long run.
Reactions: rushisaband and LeadingHeat
M