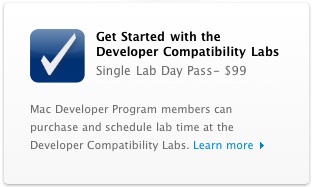 As noted by Macworld, Apple has launched a new day pass program offering access to the company's Developer Compatibility Labs for Mac OS X developers. The new day passes, priced at $99, offer users access to Apple's facilities in either Cupertino, California or Tokyo, Japan to test their software or hardware products with a wide range of Apple products to ensure compatibility.

The Single Lab Day Pass, as its name suggests, offers developers access to one of the labs - located in Cupertino and Tokyo - for one day, between 9:00 a.m. and 5:00 p.m. There are three separate labs at Apple headquarters in Cupertino, containing a truly enormous amount of Mac hardware, from recent versions of many models to older Power Macs, PowerBooks, and iBooks - they even have G4 cubes. Apple says it has more than 500 configurations on hand for compatibility testing, along with plenty of accessories and networking hardware.
Click to expand...

A single pass is valid for up to ten attendees, all of whom must be registered Mac developers. Participants are of course also responsible for their own travel and lodging costs.

For less than 36K a year, you can say you work at Apple.
S

BornAgainMac said:
For less than 36K a year, you can say you work at Apple.
Click to expand...

I presume that they have only shipping products in their lab, so this service won't be used to test compatible with yet-to-be-released products, and no NDA is required.

"They even have G4 Cubes"

Is there a rule stating that you must be testing compatibility of software you wrote? I go to college with a bunch of Mac developers, and for $9.90 a person, it's very tempting to go test the compatibility of StarCraft II with the latest Mac Pros.

My newton apps I have been writing for 10 years can finally be tested. I havent wanted to be a newton, just be a newton dev.
M

What about a "cloud" mac compatibility lab?
W