During today's "Let Us Loop You In" media event at Apple's headquarters in Cupertino, the company unveiled a new software framework called "CareKit" that will allow developers to build apps to "empower people to take on an active role in their care." iPhone apps that support the new framework will allow for users to easily track their symptoms and medication to help provide an overall wider view of their health. 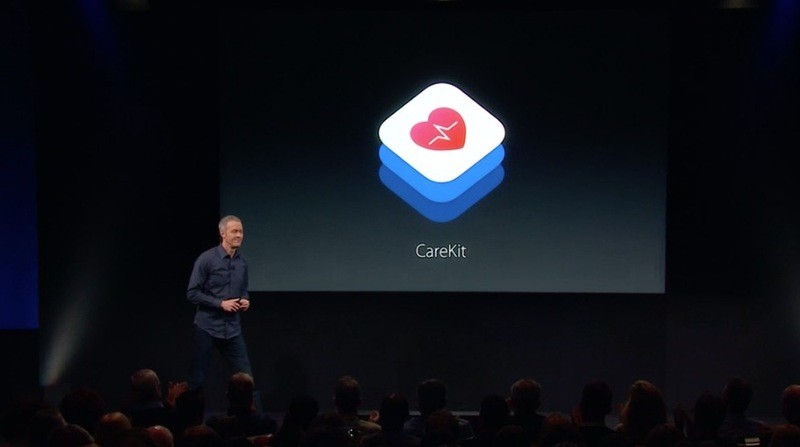 The app will have a care card, symptom and measurement tracker, an insight dashboard, and the ability to share medical information with doctors and family members. Since CareKit will be open sourced, developers will be able to continue to iterate on the abilities of these first four modules designed by Apple.

o Symptom and Measurement Tracker lets users easily record their symptoms and how they're feeling, like monitoring temperature for possible infections or measuring pain or fatigue. Progress updates could include simple surveys, photos that capture the progression of a wound or activities calculated by using the iPhone's accelerometer and gyroscope, like quantifying range of motion;

o Insight Dashboard maps symptoms against the action items in the Care Card to easily show how treatments are working; and

o Connect makes it easy for people to share information and communicate with doctors, care teams or family members about their health and any change in condition.
Click to expand...

Apple also announced a few updates to its ResearchKit framework that will allow developers to incorporate the study of genetic data into iPhone apps. Among the new fields of study allowed by the updates are postpartum depression, cardiovascular disease, and asthma. ResearchKit studies continue to expand and are now being conducted in Australia, Austria, China, Germany, Hong Kong, Ireland, Japan, Netherlands, Switzerland, the UK and the US.

This is good, potentially very useful. When people are asked by their doctor how they have been over the last few days it's really hard to convey, unless a diary has been kept. Having pain levels tracked will help to spot patterns, and it will be hard to say you've been exercising when the results show otherwise - unless you strap it to the dog I guess....
Reactions: appledefenceforce

Man this is awesome, in a few years with the way the phones and watch will grow and develop, it's going to paint a pretty good picture of your health if there's an emergency or you need to talk to your doc. Hoping the next AW has even more sensors to talk to the software.
A

Honestly I was expecting a surprise in today's keynote and although disappointingly it wasn't in their products, but the details Apple has against health, as well as environmental issues separate them from other companies.
Of course most companies have their own corporate responsibility policy and this is just a marketing strategy for Apple, but I still assume the two topics today are only a fraction of the details they put into the non-cash making stuff.
There's also a critical part in me that hopes they put more care in their products like they do with corporate responsibility.
The products announced today are overall good but no surprises, and I understand innovation doesn't happen every day but at least they could surprise us in product announces, nevertheless the health and fitness environment announces were pretty amazing surprises.
M