Apple today announced that its annual Worldwide Developers Conference (WWDC) will take place June 10-14 at the Moscone West convention center in San Francisco. The company also announced that tickets for the event, which will be priced at $1599, will go on sale tomorrow at 10:00 AM Pacific Time.

"We look forward to gathering at WWDC 2013 with the incredible community of iOS and OS X developers," said Philip Schiller, Apple's senior vice president of Worldwide Marketing. "Our developers have had the most prolific and profitable year ever, and we're excited to show them the latest advances in software technologies and developer tools to help them create innovative new apps. We can't wait to get new versions of iOS and OS X into their hands at WWDC."
Click to expand... 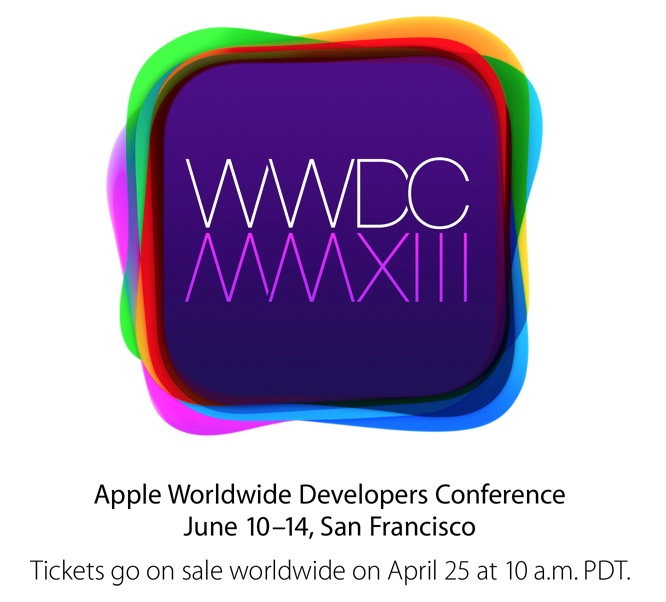 In past years, Apple has put tickets on sale simultaneously its announcement, but with tickets selling out in shorter and shorter amounts of time, it appears that Apple has decided to announce the on-sale time a day early in order to give developers equal chances at obtaining tickets. Tickets for WWDC 2012 sold out in less than two hours.

As was the case last year, Apple's requirements for purchasing a ticket to WWDC include membership in one of the company's paid developer programs. With the advance notice of ticket sales, Apple is also requiring that developers have been members of a paid program prior to today's announcement, preventing last-minute signups.

Developers between the ages of 13 and 17 must also have their tickets purchased by a parent or guardian who is also a member. Tickets are limited to one per person and five per organization.

For developers who are unable to obtain tickets to WWDC, Apple notes that it will be posting session videos during the conference rather than afterwards as it has in the past. Apple previously charged hundreds of dollars for access to the session videos, but made them free for registered developers several years ago and by last year had shortened the time lag between the end of the conference and the video launch to just a few days.

We can't wait to get new versions of iOS and OS X into their hands at WWDC.
Click to expand...

The un-Apple-y-ness of that WWDC logo has really jiggered my flim-flams.

iOS 7 is all i care about. Bring it on!
Comment
T

This graphic obviously means that the next iPhone will have a color screen, rather than monochrome.
Comment

yeeeeeeah Finally! What's up with the neon art btw?
Comment

The logo clearly suggests Apple will be launching AirPort expresses in multiple colours.
Comment
A

ryanasimov said:
That artwork looks unlike anything Apple has done before. I like it.
Click to expand...

That's exactly what I was thinking, it's definitely a change in style. Especially the font.
Comment

I hope they think big with iOS 7 !

blizaine said:
This graphic obviously means that the next iPhone will have a color screen, rather than monochrome.
Click to expand...

The iPhone has had a color screen since the 3GS.
Comment

Feed Me said:
The logo clearly suggests Apple will be launching AirPort expresses in multiple colours.
Click to expand...

WestonHarvey1 said:
The iPhone has had a color screen since the 3GS.
Click to expand...

WestonHarvey1 said:
The iPhone has had a color screen since the 3GS.
Click to expand...

Yeah, but only after you turn it on.
Comment
5

Yay! So excited! Are we likely to only see software announced at WWDC? Or are we expecting new iPhones and iPads or even Macs too? That logo is awesome! Maybe a suggestion of what's to come in iOS 7?
Comment
P

Mr. Gates said:
I hope they think big with iOS 7 !

That, and a trash folder, that way anything that goes in the "other" section of your iPhone's memory can go in the trash instead so you can actually get rid of it. God, I that "other" data accumulating on my phone.
Comment
You must log in or register to reply here.
Share:
Facebook Twitter Reddit Email Share Link
Register on MacRumors! This sidebar will go away, and you'll see fewer ads.
Sign Up
Top Bottom