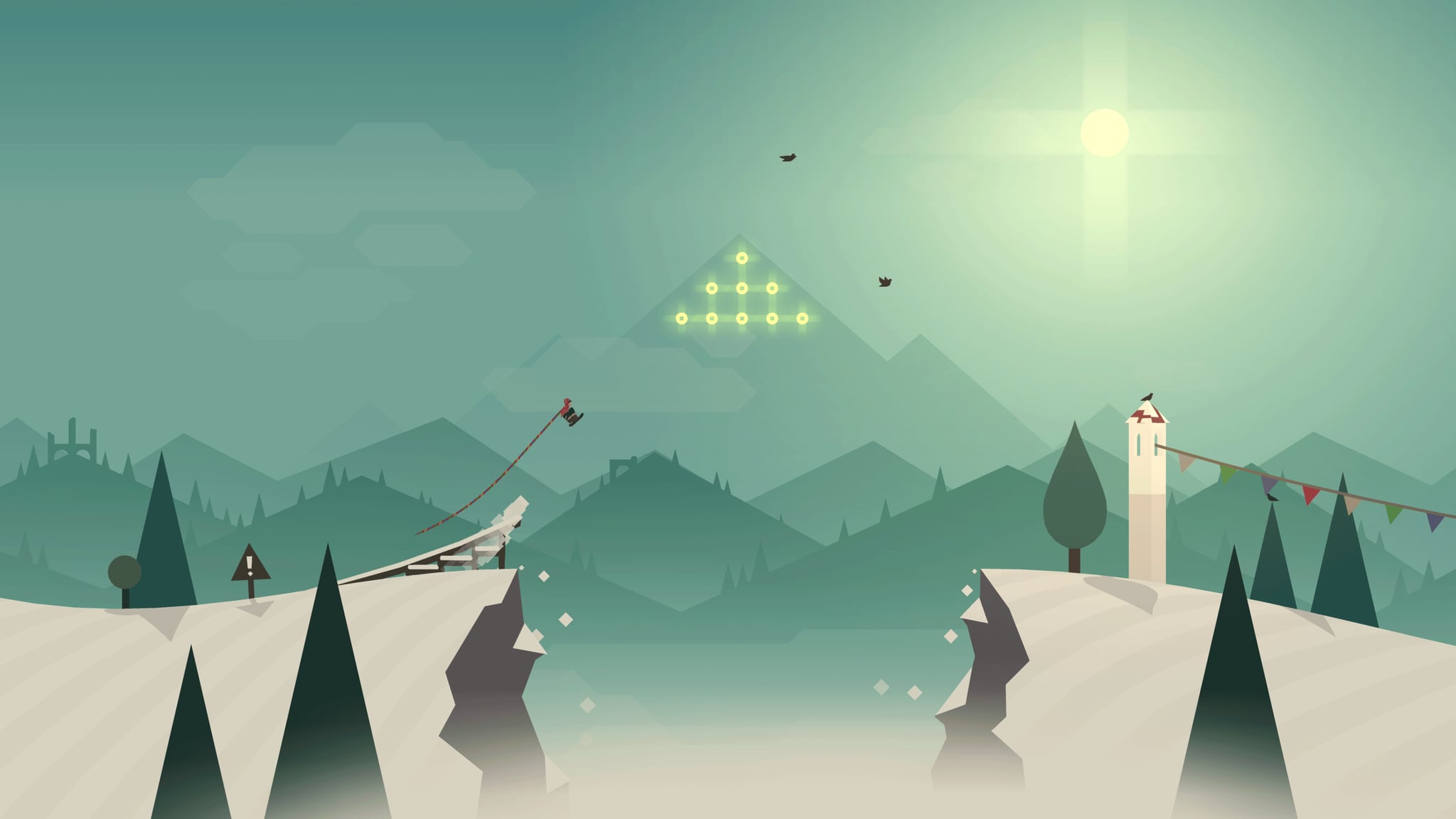 The game will feature original music and handcrafted audio to provide an immersive experience, and it will be popular with those who were fans of the first "Alto's Adventure" game that came out seven years ago. Apple Arcade will get the title on Friday, March 25.

Apple Arcade is gaining new App Store Greats this month, and for those unfamiliar, App Store Greats are classic titles that have been reintroduced on the Apple Arcade platform. "Shadow Blade+" from Crescent Moon Games will come out on March 4, and it is an action-platformer where players take on the role of a ninja named Kuro, racing through different stages filled with traps and enemies.

Popular puzzle game "Monument Valley 2" is also coming to Apple Arcade in March, and players will once again be able to take on the role of Ro, teaching a child about the mysteries of the valley, exploring the environment, and manipulating architecture to progress. The Apple Arcade version of the game includes a new chapter called "The Lost Forest," designed to raise awareness for the conservation of trees.

Apple Arcade can be accessed from the App Store app, and the service is priced at $4.99 per month for the whole family.

Ah, yeah, thanks for reminding us Apple have a gaming service.
Reactions: Barbareren, nvmls, CarpalMac and 13 others

Been playing this game for many years! Looks like a great refresh
Reactions: Doebldodl, SFjohn, jonnyb098 and 4 others
A

People tend to think Apple sees Arcade as a competitor to Xbox Pass etc. I don’t think that’s the case, it’s not going head to head with GeForce Now, Stadia, etc. These are more casual, family games with a specific quality standard and without micro transactions.

And to be honest, either free when getting an AppleTV, at 4.99 a month or less (its ~$3 dls in my country) or bundled with services you already pay for, it’s an amazing value.
Reactions: macos9rules, carlsson, SFjohn and 5 others

I guess this is nice for those who want the alto games on arcade, but for anyone (like me) who already has the originals, it’d take something more compelling than this to get me to subscribe to apple arcade.
Reactions: 3Rock, entropys and Huck

Serious, not snarky question: does anyone use Apple's gaming subscription? I don't know a single person who does, and almost all of my friends are gamers. Really curious.
Reactions: macos9rules, nvmls, 3Rock and 3 others

I thought Apple Arcade was dumb with dumb games. Then I got a 3 month trial for free and am really liking it. The games are not AAA games. They are casual games but with no micro-transactions. I am having fun, they have new games all the time, and for $4.99/month, its a good value. I get why gamerbros hate it, and make fun of it, and talk down about it... but it is not for them.
Reactions: wlev, Wizec, 211 and 10 others
B

We have it, but don't use it much. It just came w/ our Apple One sub. My kids have recently discovered Alto though and I'm going back through them all. Great game.
Reactions: schneeland, 211, star-affinity and 2 others

I played every Apple Arcade game (including 2 that were removed from the store). 104 of the games I didn’t enjoy but did enjoy 130 games that are still available to download. I hope this one is not one of the sucky games.
Reactions: antiprotest

I used to but people who sub to Apple Arcade aren't doing it because they're "gamers". That's a totally different market.

What most people consider as gamers are people playing on a newer Windows PC with a dedicated graphics card. This seems like for the less serious want to have fun crowd but is a bit tired of microtransactions "Hey get the new whatever for only 99 cents ?‍♂️"
Reactions: schneeland, BWhaler and Moonlight

If the iPhone 14 Pro has the same power as a PS4 Pro, why do games on the app store still look out of the older days? I really want some PS4 Pro like games on the App store.
Reactions: nvmls and Admiralbison

It's not Apple that makes the games... I'm not sure but I have a feeling even though the GPU can do something that doesn't mean most users would want it to do it. If a game was maxing out GPU I suspect the battery would die quickly. Maybe some "gamer" types would play it but most people who play phone games are doing it to pass the time and they're not crazy about if it has 200 FPS and checking their 1% lows. The normal people would hate any game that killed their battery really fast.
Reactions: Moonlight
S

If Apple wants to recycle old ios games and feature them as arcade games, recycle real classic games from neo-geo or something by acquiring them. It wouldn’t cost that much.
Reactions: Wizec

Reminds me of how much I hate flat design.
Reactions: nvmls, NightFox and AAPLGeek
D

I've tried it three times. Dec 2020 for three weeks. July 2021 for six weeks. December 2021 for less than a week*. I keep hoping for something compelling, but it just never pays off.

This is the second or third game I've seen that was on sale in the AppStore. But now that sales have dropped off, it gets moved to AppleArcade. AA is becoming the closeout bin. The discount aisle. The place where developers hope they can eke out a few more bucks on a game that is past its peak.


*yes after I cancelled it AA would run until the end of the current month before it would expire. But I stopped looking at it. For the record I'm a casual gamer, not into thousand dollar graphics cards to play hyper relaistic games. I just want to relax. I usually play on my iPad.
Reactions: nvmls, -DMN-, entropys and 1 other person
2

Apple offered 3 months free Apple Arcade when I bought my iPhone 13. I tried it, but it just wasn't very appealing. Maybe it didn't help that I already had literally hundreds of games on multiple mobile devices.
Reactions: TheYayAreaLiving 🎗, nvmls and MJaP

I have since the beginning. It's good, not great, but worth the $5/month for me to play casual games without the IAP. Alto is a game I purchased and I'm going to play it again not that it has more content on Arcade.
Reactions: macos9rules
I

I use it quite often. Personally enjoy quite a few of the games and i have it bundled with Apple one so I think it’s good value

There’s a new game about once a week

There are plenty of relaxing iPhone games that don’t require a subscription, so no, I don’t pay for Apple Arcade. Bejeweled is about right when my I’m stressed. There are so many other similar games like those (simple/free or 1 small payment) that my family and friends use…
Reactions: TheYayAreaLiving 🎗 and CarlJ

oofio2461 said:
If the iPhone 14 Pro has the same power as a PS4 Pro, why do games on the app store still look out of the older days? I really want some PS4 Pro like games on the App store.
Click to expand...

because the battery would die in an hour.. such graphical power is nonsense in a device with such a small battery
Reactions: SueperDrive
A

RedTheReader said:
I think the Mac and Apple TV would be well served with more games featuring realistic graphics, but the reason these sorts of titles don't exist in greater quantity on the iPhone is largely because people don't want to play them on their phones. People get a better experience on TVs, or monitors, or even laptops.
Click to expand...

”People don’t want to play them on their phones”

You just making this up?

Let’s not fool our selves.

I guess that‘s why emulation of Gamecube, PS2, Dreamcast and now Switch with many hoping for PS3 is massive on Android phones with 1-10 million downloads on those apps.

Remember when quality games like this which were more interested in providing you with good gameplay rather than being shallow cash generating machines nickel-and-diming people used to be common on the regular app store... I miss those days <nostalgic sigh>
Reactions: nvmls
K

Apple Arcade not just has typical mobile games, but also indie games that work well on macOS. I especially liked Pathless, Last Campfire, Oceanhorn 2 and Alba. These games are sold on other platforms for quite a bit of money, e.g. Playstation or Switch: Pathless 34,99 euros, Last Campfire 14,99 euros, Oceanhorn 2 29,99 euros and Alba 19,99 euros, so Apple Arcade does provide value there. There are lots of other games worth playing and they are even available for macOS.