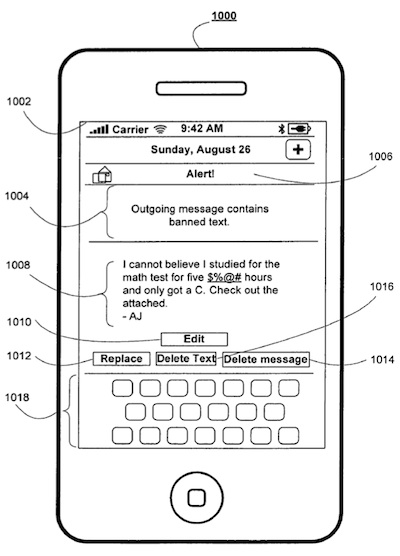 A newly-awarded Apple patent addressing parental controls for text-based communication is receiving a considerable amount of attention from the mainstream press today for its ties to the hot-button issue of "sexting", the sending of sexually-explicit messages that is of growing concern to many parents.

Apple's patent, which was filed in January 2008 and first revealed in July 2009 when the application for it was made public, addresses the means by which a filtering system could be used to block messages such as emails and texts containing objectionable material according to user-defined criteria.

An entire message identified by the filter could be blocked, or the objectionable content could simply be stripped out while the remainder of the message is allowed to be sent or received.

Apple's focus extends beyond that of simply addressing objectionable content, noting that the feature could be used in an educational enviroment to encourage proper spelling and grammar or usage of certain vocabulary words, or to set quotas for usage of foreign words by a student studying a new language.

What does this say about America? That we actually need to monitor text messages in fears of sexting?
Comment
D

Great, now I'll have to jailbreak my iPhone just to flirt with my wife while she's in meetings...
Comment
S

Wonder if Apple will use a "Body Part dBase" to identify potentially offensive messages. Or maybe only good looking people will be allowed to "sext".

This is RETARDED. Do people really think that blocking 'sexting' is going to deter teens (or anyone, for that matter) from having these type of conversations? Please. I was once a teenaged boy. Where there's a will, THERE'S A WAY.
Comment

It's good that they are providing ways to assist parents. Usually companies out-maneuver and out-spend parents. No doubt it will lead to other ways of getting around it but it is a potentially useful tool for the many parents who actually do care about such things.
Comment

regardless if one likes censoring of texts I do NOT see how this can be a patent.

What is the invention here? Isn't scanning the text for keywords and then blocking it from being sent out a obvious thing?
Comment

if this is forced upon the user, as in non-optional, i will definitely be swticthing to android. Its one thing to censor the app store, its completely fascist to censor my communications.
Comment

This is one apple patent which I really hope apple never implements. This is really a bit tooooooo much.
Comment

Obviously you did not read the article.

Replace "user" with child and administrator with "Parent/parental control". This could be expanded to administration of company supplied iPhones but in that case, I don't see the problem either. The admin could block codenames of products a company is working on for example.
Comment

What did they invent actually? A filtering system? One of which has existed forever?
Comment

Parents relying upon companies to parent for them win again and aggravate everyone else.
Comment
G

Given how often my iPhone's spellcheck corrects words that don't need to be corrected, I'm not convinced this is a new concept at Apple.
Comment

So now kids will invent all new slang words that you've never heard of.

BONUS: Now instead of just texting them they can actually talk about sex right in front of you without knowing it! Wonderful!
Comment

Ahh, the conspiracy theorists are back. If Apple implements this (and I hope they do) it will undoubtedly be part of parental controls which is where it belongs.
Comment
J

Can't do no harm

Great idea. Though I reckon the kids will get around it no probs.
Any parent out there ever tried reading an SMS/Text message from them?!!

Programmers are gonna have fun keeping up with their language I suppose...
Comment
M

MacRumors said:
that the feature could be used in an educational enviroment to encourage proper spelling and grammar
Click to expand...

Yes! Steve push this out in an update right now.

Arn, please start working on enabling this feature for the forums; make it mandatory.
Comment

The kids will just use abbreviations/slang.
But there are so many words that could mean something completely different. Even if they start filtering abbreviations.
"I'm playing with dk!"
"Outgoing message contains banned text"
I meant Donkey Kong!

I don't get why people are so negative about this. It's a setting, it's parental control etc, not a standard.

Personally I would love this if I had kids. I don't want to read their SMSs, but I'd love to be notified if they use certain words excessively so that I can have a talk about it with them without breaking their privacy (too much).
Comment

wtf?!? too far in the consumer control department. Looks like a bit less fun between me and the girlfriend from that update onwards.
Comment
X