As noted by a number of MacRumors forum members, customers who placed early orders for the new 27-inch iMac are beginning to see their credit cards charged and order statuses changing to "Preparing for Shipment". The new status indicates that the orders can no longer be changed or canceled and is the final stage before the machines are passed off to delivery companies. 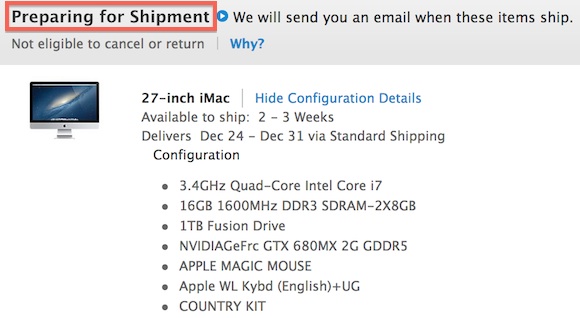 Customers who have received updated order statuses are reporting that they are still seeing their originally quoted delivery times, which are typically in the range of December 21-31, but it seems that their orders may arrive slightly ahead of that window if they ship out in a timely fashion.

Update: Apple has now begun shipping these early orders, with many customers seeing delivery dates of December 18 while a few are seeing dates as early as December 13. We're also hearing from customers outside of the United States that their orders are similarly progressing toward shipment.

Nice ... in all honesty I want to see how the big 27" fares with the maxed out i7 with heat dissipation. The last gens got really hot up there and with a thinner enclosure I'm not sure how it will handle all that heat.

My order for a fully maxxed out config shows this as well hopefully they beat that Dec 27th estimate!!

So that nobody can cancel their orders knowing that their iMacs won't be shipped until 31 Jan 2013?
R

Great to hear, although sadly my BTO is not in this stage yet with an estimated delivery of 21st - 27th.
K

They are probably processing them as they came in... I wonder how many card rejections they will get on these compared to the iPhone orders... Possibly bumping up shipping times.

Guess we will know in 48 hours.

Still in the "Processing Items" status for me. I have a 21st to 28th delivery schedule. BTO order as well

Looking forward to seeing them in the APPLE store, and check them out in person.

Very nice I wonder when 3rd party sellers with get them in. (Amazon, macmall, etc..)
A

Rockondevil said:
Great to hear, although sadly my BTO is not in this stage yet with an estimated delivery of 21st - 27th.
Click to expand...

I'll have to call the Apple Shop I ordered through and check on the progress of my maxed out 27". Still not going to believe any shipping date until I have my hands on my new iMac.

This iMac is going to be the centerpiece of our office. Perfect size for using Adobe InDesign and iBooks Author side-by-side as we convert our print books into ebooks.

japanime said:
This iMac is going to be the centerpiece of our office. Perfect size for using Adobe InDesign and iBooks Author side-by-side as we convert our print books into ebooks.
Click to expand...

Awesome. Hopefully this will make people who have complained here happy.

iMikeT said:
Awesome. Hopefully this will make people who have complained here happy.
Click to expand...

still hoping for a pre-Christmas delevery here in Denmark, did order like 1 hour after it was up.

Yep, my BTO is "Preparing for shipment" as well

Makes for a nice Christmas present

That made me laugh and should be the standard reply to 90% of Internet posts, including this one.
N

i wonder too, when 3rd party sellers with get them in. (Amazon, macmall, etc..)
At least Fredruary?

Not to be OT but I'd like to know more about eBooks and making them.
J

Ordered my BTO (UK) about 2 minutes after the UK store went live (that was a frustrating experience knowing that the US and AU stores were already taking orders). Mine is still "Processing", expected December 27-28.

I ordered mine within about 10 minutes of it going on sale. I was in the car on the way home at 2am when I got the tweet about it txt'd to my old ass phone. Sped home as safely as I could. Here are my specs:

How long is the time frame between preparing for shipment too dispatched?
G

Darn, mine changed too but from dec to jan 8th and still in process. So i think we are getting screwed again, first by paying more in euro and now by delaying the orders.
You must log in or register to reply here.
Share:
Facebook Twitter Reddit Email Share Link
Register on MacRumors! This sidebar will go away, and you'll see fewer ads.
Sign Up
Top Bottom