AppleInsider reports that Apple is planning to launch a test program later this year that would see the company open "store-within-a-store" concepts in 25 Target stores around the United States. The stores would be similar to the "Apple Shops" found in a number of Best Buy locations.

According to a source familiar with Apple's plans, the company plans to begin operating Apple-branded areas within 25 larger Target stores in locations which can't support a standalone Apple Store.

The initial opening would be a small start, given that Target, the second-largest discount retail chain in the US, operates 1752 stores in the US.
Click to expand...

The report notes that Apple has had a long-standing arrangement with Target for the retailer to feature iPods in its stores, a relationship that has since expanded to include the iPad and iPhone. With the test program, these select Target locations may soon also begin selling Mac products in its stores in addition to providing other dedicated Apple product sales support. 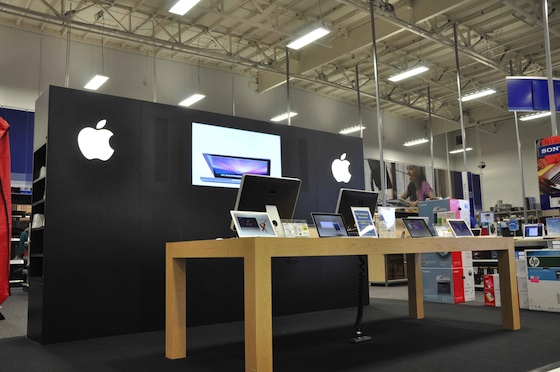 Much better venue than Wal-mart.

This has already been happening in Canada for years.
Futureshop has a similar setup. You can buy and apple product there.
http://www.Futureshop.ca

This would be great!

The BB mini-store is preferable to the Apple store for me. The Apple store in my city is too crowded for my taste. I just wish the mini-store stocked a better selection, like a MacBook Pro 17" with a SSD instead of the stock configuration. I did get my 256g Air at a mini-store recently and an iMac 24" several years ago.

John Lewis department store here in the UK has had these for a while also.
M

My local petsmart already has one of these.

People make fun of the Apple geniuses, but people at best buy and the like are just so upset all the time. If they could get two or three apple geniuses in the store, I like the idea, otherwise I would worry target employees would tarnish apple's customer service image.
F

Convenient for smaller cities/ towns w/out an apple store. However, isn't this what Apple actually used to do before they had their own retails stores

I don't really think of Target as a "computer" place.

but sure, why not. Target has clean lines and feels more "cool/hip" than some other stores.
4

Not sure how to save this as an image, but here you go.

mkjj said:
John Lewis department store here in the UK has had these for a while also.
Click to expand...

Fazzy said:
Convenient for smaller cities/ towns w/out an apple store. However, isn't this what Apple actually used to do before they had their own retails stores
Click to expand...

Yes, and no. I remember the old CompUSA store near where I live and they had something like this, but as you may remember, CompUSA died as have many of the old established consumer electronics stores (Circuit City, anybody?). Best Buy's reputation isn't the best, but because it's practically the only game in town any more, it simply isn't going away--yet.

The advantage for Apple here is that they're not tapping a consumer electronics store, but rather putting the product into a much more open market, a 'general store' as it were. More people--people who aren't just looking for electronic devices--will see the display and the logo and many of these people may already have an iPod or iPhone. True, sales may be slow in a place like Target, since most customers there are looking for lower-priced items. On the other hand, the exposure may see more sales of Apple's lower priced PCs such as the basic MacBook, Mac Mini, iMac and iPads.

Personally, I think it's a good idea for those areas, as they say, can't support a full-on Apple Store. I know of one place in particular that would benefit from it.
A

I can't wait for a photo that shows this Apple store-within-a-store with other brand logos on the main store's wall behind it so we can enjoy lots of needless outrage.

ncaissie said:
This has already been happening in Canada for years.
Futureshop has a similar setup. You can buy and apple product there.
http://www.Futureshop.ca
Click to expand...

That's because Best Buy owns Future Shop. But this is a first for Apple being in a general retail store. I don't think this test will go too far. People don't go to Target to buy a computer or decide to buy a computer when they are picking up a new duvet and bottle of Tide. I hope we don't look back at this moment in a couple years and say this is when Apple jumped the shark. Nothing against Target, just think it's an odd place to push computers.
S

The store-within-a-store concept is just not the same experience as an Apple Store and diminishes the brand. Apple products sell for a premium partly because the entire ownership experience is great and it starts at the store.

I get that everyone does not have a nearby Apple Store but I do not think this is the answer. Remember CompUSA? Think about Best Buy. The last time I was looking at something I planned to order from Amazon, I overheard a salesperson steering a customer away from the Mac store toward the PC store with blatant disinformation. Half the Mac's were off, the area was a bit cluttered, etc. I like Target, but without Apple employees full-time, the experience will suck.
L

This is what we have in Mexico in several stores such as Sam's, Office Max and Office Depot, and some departmental stores such as Sears.
They are crap, because they use internal people, not trained by Apple, which know close to anything about what they are selling
2

Chupa Chupa said:
I hope we don't look back at this moment in a couple years and say this is when Apple jumped the shark.
Click to expand...

mkjj said:
John Lewis department store here in the UK has had these for a while also.
Click to expand...

John Lewis sells Apple products, but it isn't official employees there (they have had official Apple reps in the past, but then they have official reps of Toshiba and HP too there to demo the products, and there's no Toshiba or HP stalls like described in the OP).

Think this concept is to actually bring what the Apple Store offers to say the likes of John Lewis (if it ever gets outside the US anyway).

Makes sense. Best Buy is on a slow decline right now. And unless things changed that is followed by a quick demise like CompUSA and Circuit City had. If they see Target on the rise and willing to deal then this could be good for Apple. And Target has a slightly better reputation for better stuff than Walmart.

This commoditizes Apple's brand and leaves the sales up to a notoriously pro-PC (Best Buy), or also notoriously brain-dead (Best Buy/Target) bunch of 'sales people'.

The average Target employee isn't going to take the time to learn the Mac and their stores are too understaffed to deal with the public looking to kick the tires and purchase a Mac. iPods? iPads? Yes. Anything more upscale? Are they nuts?

I have overheard the 'sales people' at the local Best Buy on occasion rip the Mac to a customers face when they ask about it. I have gotten involved in some of the more egregious episodes that I've witnessed. Once a 'sales person' said that the Macs are 'notoriously harder to use than the PC with Windows 7'. And the customer repeatedly asked what made it so hard to use and the 'salesperson' said that 'Macs don't run windows or any of the PC software and that getting your PC data on a Mac is nearly impossible'.

Yes! The Mac is doomed because it can't run 'Windows software'. I grabbed a box of Microsoft Office and showed the customer and said that it reads PC data with no problem. The 'salesperson' said that 'Macs don't have floppy disks' which I pointed out that none of the PC's they sold had one either'. The guy then huffed and walked away.

I'm sure that the average Target 'associate' would do a lot better...

Is Apple's hatred for resellers really bad enough that they would rather but their brand in Target than cultivate the existing reseller channel and support independent resellers?

I thought that Apple meant 'Hagen Daz', not Borden's...

Apple is touting the 'Apple Solutions Consultants' program. I just checked in the state of Michigan, and out of 21 locations listed, only 5 have those Apple trained 'consultants'. That's pretty pathetic... What ever happened to the 'evangelists' that made Apple into a religion in years past?

Why doesn't Apple tap their loyal fan base of local users groups to help staff these 'stores'. Sure, it might be ruff for some to do but they would understand the products a hell of a lot better than the average Best Buy/Target robot...

I'm concerned that this is doing major damage to the Apple brand at a time when Apple needs to maintain it... If I was a board member, I'd do everything that I could to stop this from happening. (Yes I'm aware of the rubber stamp Apple board but something would have to be said before it's too late)
Last edited: Jan 6, 2012
You must log in or register to reply here.
Share:
Facebook Twitter Reddit Email Share Link
Register on MacRumors! This sidebar will go away, and you'll see fewer ads.
Sign Up
Top Bottom