Apple CEO Tim Cook said on Wednesday he is optimistic that some apps pulled from China's App Store to comply with regulatory rules will eventually be reinstated (via Reuters). Cook made the comments at the economic Fortune Forum in the southern city of Guangzhou, in the latest stint of his week-long China visit. 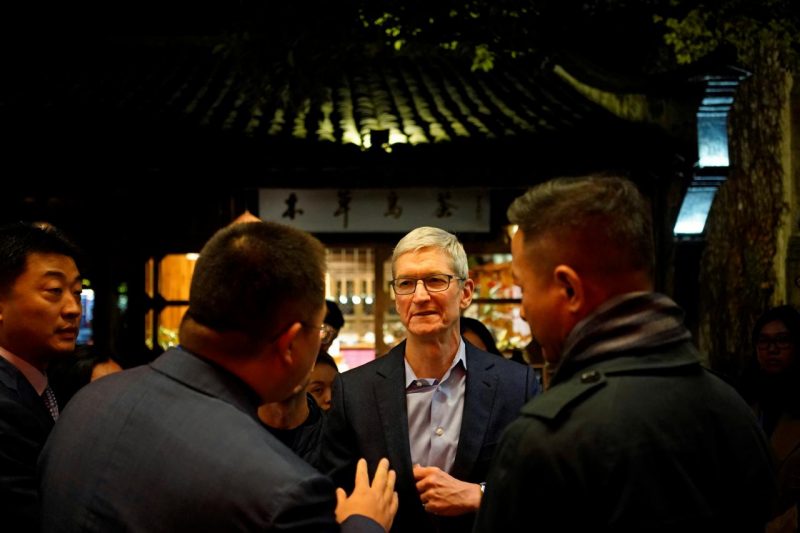 "My hope over time is that some of the things, the couple of things that's been pulled, come back. I have great hope on that and great optimism on that," Cook said, adding that he always tries to find areas to work together and if he gets criticized for that, so be it.
Click to expand...

Apple has come in for criticism from local users and rights groups for acceding to government requests that it pull some apps from its Chinese App Store, including VPN services used to gain access to online services banned in China.

During the Forum, Cook also said that he believes strongly in freedoms - a comment that has been interpreted as response to a U.S. democratic senator's remarks on Tuesday that Apple had a moral obligation to promote freedom of expression.

"[T]ech companies must continue to push back on Chinese suppression of free expression," Vermont senator Patrick Leahy told CNBC. Leahy said he believed Apple was in danger of not fulfilling its "obligation to promote free expression and other basic human rights."

Apple responded in a letter, explaining that it had "questioned the legal basis of the request" and had provided formal comments on Chinese cybersecurity law through trade associations. However, Apple stopped short of condemning the Chinese government's censorship, instead telling the senators that "actions are our most powerful statement."

Cook kicked off his China visit on Sunday, at the country's state-run World Internet Conference, which aims to develop an "open" digital economy, despite its regular practice of online censorship and regulation.

How about making country switches in the AppStore easy Tim ? Maybe over the tides of time ? Tim ?
Reactions: vanwo
J

Brave words from Comrade Cook
Reactions: Adam Warlock, Cameroncafe10a, vanwo and 6 others
A

He fully knows that it’s not going to happen. Firms like Alibaba will make sure competition from outside platforms will remain uncompetitive. Trump says USA first; China make sure its China only.
Reactions: Adam Warlock, Cameroncafe10a, nt5672 and 2 others

Perhaps Mr Cook could write an impassioned internal memo to Apple China employees explaining how he stands with them in their quest for freedom, and how the company stands for freedom of expression, diversity and open borders and will do what it can to help achieve these aims.
Reactions: Cameroncafe10a, SoN1NjA, Applebot1 and 3 others

The hope is strong in this one...
Reactions: SoN1NjA

Hey Cook the Coward, why didn't you put your SJW-money where your mouth is and tell China to go pound sand to begin with?
Reactions: Cameroncafe10a, Huck and trusso
T

Naraxus said:
Hey Cook the Coward, why didn't you put your SJW-money where your mouth is and tell China to go pound sand to begin with?
Click to expand...

It is really quite simple. It’s their country. If China wants to make certain apps unavailable then apple has no choice but to comply. The risk of not doing so is that China would block the App Store completely or take other draconian measures.
Reactions: RuralJuror, tzm41 and trusso

Money is Cook's lubricant. He will bend over to make "his spreadsheets great again". /s
N

thebeans said:
It is really quite simple. It’s their country. If China wants to make certain apps unavailable then apple has no choice but to comply. The risk of not doing so is that China would block the App Store completely or take other draconian measures.
Click to expand...

Then Cook the SJW Hypocrite needs to **** with the lecturing about privacy and freedom if he's not willing to put his money where his mouth is.
Reactions: nt5672 and Huck
N

thebeans said:
It is really quite simple. It’s their country. If China wants to make certain apps unavailable then apple has no choice but to comply. The risk of not doing so is that China would block the App Store completely or take other draconian measures.
Click to expand...

Yep, it means whenever money is involved Cook will set his ideals aside. Does not matter what country he is in at the time. Why American's believe he is some god, is a mystery to me, because it is all just a marketing snow job. He is not different that other big company leaders, no morals, no ideals, just keep the money rolling in.

I think people are forgetting that Tim’s responsibility is to shareholders first. Apple does that through making devices/services that customers want to buy while complying with the laws in the countries they operate. You’ll always see Tim make a business decision over his personal beliefs. Unless they can be aligned.
Reactions: RuralJuror and rizzo41999

What this (among other things recently) shows is that Apple is either unwilling to stand up to Chinese meddling, or they have no power to do so. The ultimate solution if they won't bend (and they likely won't) is to pull out of the country entirely, probably for both retail (possible but unlikely) and manufacturing (almost impossible).

So what happens when the Chinese start demanding things like encryption backdoors, or "inspecting" all Apple devices before they go out the door? I'm sure these "requests" are already happening, but at some point they will become threats. I have decreasing confidence that Apple will stand firm on their stated principles of being consumer-first because there is simply too much money involved.
You must log in or register to reply here.
Share:
Facebook Twitter Reddit Email Share Link
Register on MacRumors! This sidebar will go away, and you'll see fewer ads.
Sign Up
Top Bottom