Apple CEO Tim Cook "secretly" signed an agreement worth more than $275 billion with Chinese officials, promising that Apple would help to develop China's economy and technological capabilities, The Information reports. 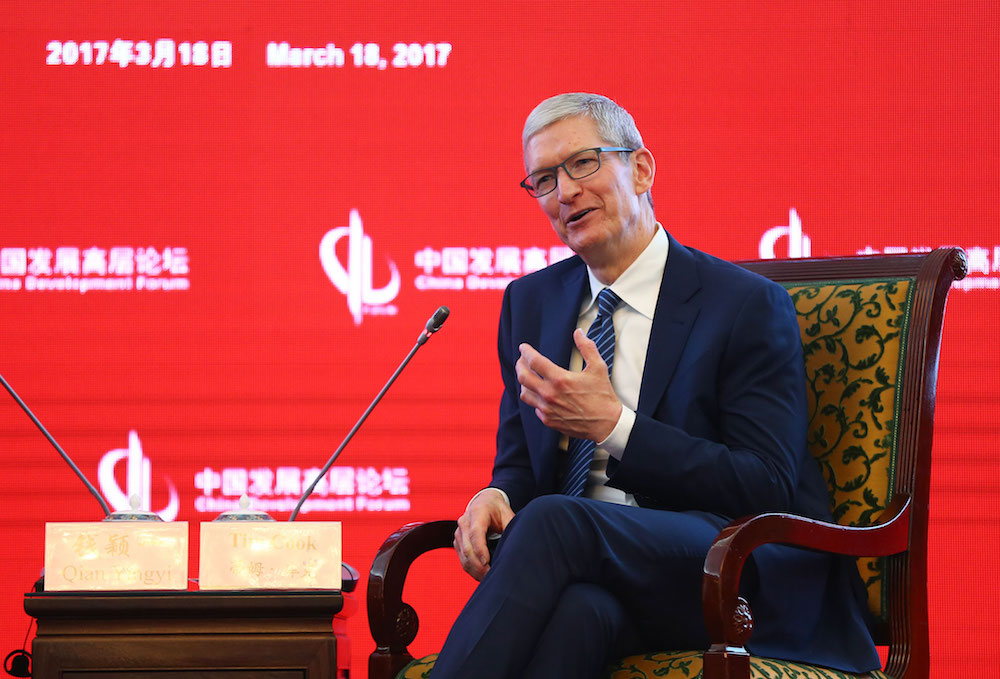 In an extensive paywalled report based on interviews and purported internal Apple documents, The Information revealed that Tim Cook personally forged a five-year agreement with the Chinese government during a series of in-person visits to the country in 2016. The need to push for a closer alliance with the Chinese government reportedly came from a number of Apple executives who were concerned about bad publicity in China and the company's poor relationship with Chinese officials, who believed that Apple was not contributing enough to the local economy.

Alleged internal documents show that Cook "personally lobbied officials" in China over threats made against Apple Pay, iCloud, and the App Store. Cook set out to use a "memorandum of understanding" between Apple and a powerful Chinese government agency called the National Development and Reform Commission to formally agree to a number of concessions in return for regulatory exemptions. The 1,250-word agreement was written by Apple's government affairs team in China and stewarded by Cook as he met with Chinese officials.

In May 2016, Cook announced that Apple would be investing $1 billion in the Chinese ride-hailing startup Didi Chuxing in a pointed attempt to mollify authorities, the report added. Shortly after, Cook, Apple Chief Operating Officer Jeff Williams, and government affairs head Lisa Jackson met with senior government officials in Zhongnanhai, the central headquarters of the Communist Party of China.

Cook's negotiations led to the successful signing of the multibillion-dollar agreement, quashing a number of regulatory actions against the company with exemptions and enabling access to the Chinese market, in return for significant investments, business deals, and worker training in the country.

The agreement included a pledge from Apple to help Chinese manufacturers develop "the most advanced manufacturing technologies," "support the training of high-quality Chinese talents," use more components from Chinese suppliers, sign deals with Chinese software firms, collaborate with research in Chinese universities, and directly invest in Chinese tech companies, as well as assistance with around a dozen Chinese government causes. If there were no objections from either side, the deal would be automatically be extended for an additional year until May 2022, according to the agreement.

Apple vowed to invest "many billions of dollars more" than its current expenditure in China, including on new retail stores, research and development facilities, and renewable energy projects. Other internal documents reportedly showed that Apple's pledge amounted to more than $275 billion in spending over a period of five years.

The Information suggests that Apple is heavily reliant on Cook for international negotiations and speculates that it could face difficulties dealing with government affairs when Cook stands down as the company's CEO.

No surprise here…
Reactions: ackmondual, TakeshimaIslands, -DMN- and 17 others

Man of the people, always putting personal priorities before the people.

Always putting products before the people.

Oh well, whatever. let's get some more emojis and let this whole thing fizzle. ???‍♂️
Last edited: Dec 7, 2021
Reactions: George Dawes, GirlinCali, thalegold and 49 others
A

Maybe one day he should think about resettling to China… just saying.
Reactions: George Dawes, GirlinCali, ackmondual and 34 others
M

Think different or not.
Reactions: ackmondual, thalegold, TakeshimaIslands and 5 others
C

Will the Apple Board force him out over this ?

If he wasn't before, he is clearly going to be in Hot Water now !
Reactions: George Dawes, GirlinCali, thalegold and 30 others
L

Oof this is going to be a fun thread.
?☕️?
Reactions: Tim Apple’s Glasses, diego, TakeshimaIslands and 17 others

Cosmosent said:
Will the Apple Board force him out over this ?
Click to expand...

The Build Beijing Back Better Task Force might scold him publicly for this, but in private, they are in deep admiration for his 'courage'.

He did it secretly because he's modest, that's all. Duh!
Last edited: Dec 7, 2021
Reactions: George Dawes, Orionfox, behdadOS and 25 others
L

Cosmosent said:
Will the Apple Board force him out over this ?
Click to expand...

Given that this deal has most likely made them billions of dollars, no.
Reactions: TakeshimaIslands, bmot, SFjohn and 22 others

Here's a crazy thought: how about investing in the country in which your company is based out of?

Offensive, I know. Not feasible, I know. Ballsy to even mention... I know.
Reactions: George Dawes, Ladybug, exMakEvangilist and 77 others

Cosmosent said:
Will the Apple Board force him out over this ?

If he wasn't before, he is clearly going to be in Hot Water now !
Click to expand...

Why would they force him out? They had to know about it.
Reactions: George Dawes, Squeak825, SFjohn and 15 others
B

Way to go Comrade! I hope China has an extra room for you to stay when you are up for treason.
Reactions: exMakEvangilist, SnakeEater1993, thalegold and 41 others
L

MacRumors said:
The Information suggests that Apple is heavily reliant on Cook for international negotiations and speculates that it could face difficulties dealing with government affairs when Cook stands down as the company's CEO.
Click to expand...

for the people thinking that this will affect Tim in the slightest, read this part.
The board is definitely not forcing him out anytime soon, if anything they’re trying to keep him as long as possible to make them more $$$
Reactions: George Dawes, -DMN-, VaruLV and 6 others

Remember when Apple said they’d move out of China and start doing more assembly in Vietnam to diversify their production? Pepperidge Farms remembers!
Reactions: George Dawes, The1andOnly, ackmondual and 44 others
A

TMU Tim spent a few years in China when he was doing Supply Chain work.

So long as the agreement is in compliance with US, EU & other govt laws on how they deal with CN then I see very little to complain about.

It is expected that any domestic or multinational to follow the laws & rules of the country they operate in.

When they disagree with the country then they should pull out like what Google did.

In spite of all the negativity of China they did the right thing of not allowing Facebook. If Facebook was in China I'd have expected a civil war by now

If you have a problem with their 1-child policy then you are ignoring or are ignorant about the fact that they were abl to life ~700 million of their citizens into the middle class, at the time did not have the capability to feed more citizens that would have been born and that the climate disaster was delayed by a few decades by having fewer carbon foot prints being created. Many cannot comprehend the impact humans have globally so can easily deny its impact in a worldwide scale.
Last edited: Dec 8, 2021
Reactions: George Dawes, ackmondual, diego and 9 others
C

Spock said:
Why would they force him out? They had to know about it.
Click to expand...

Disagree, Steve Jobs put a "Hands Off' Board in-place, & it's mostly the same people now as then !

Anybody can type anything on a computer screen and all of a sudden, everybody believes it. AMAZING!
Reactions: ValueArb, George Dawes, SFjohn and 12 others

Sick. I know this may be hypocritically from me since there is like no way to avoid anything "china" which is almost the point and sad truth but its kind of messed up how everyone is willing to just look the other way as long as you can do nice business with them. It sort of reminds me of Nazi Germany and how a lot of cooperations not only continued but were happy to do business with them until they started to hit allies.

In short: China managed to slowly make everyone their B... I mean relying on them. Just look what happens when China closes its harbours for a few weeks. MESS
Reactions: rikuvalpas, GirlinCali, ackmondual and 41 others
C

Lounge vibes 05 said:
Given that this deal has most likely made them billions of dollars, no.
Click to expand...

In the Court of Public Opinion, at least here in the Sates, I think Tim Cook may (now) be in BIG trouble !
Reactions: ackmondual, CosmoCopus, SFjohn and 11 others

At first glance, I am not happy about this, and agree with every comment before mine, which have been overwhelmingly negative. If I thought that these investments would push China to a more open society and economy, it would be a different story, but the history of the CCP has taught us otherwise. All this tech crap about selling our data and fornicating with Communist, genocidal regimes makes me want to convert to a Luddite. I mean, are we at a point in the tech world where any advancement will inevitably put our economy and security at risk?
Reactions: odaiwai, Capeto, -DMN- and 6 others

China is an important market for Apple, for assembling their products and for sales, so no surprise here.

Forgot to add, rumor OR NOT, Congress will investigate this !
Reactions: Capeto, sideshowuniqueuser, centauratlas and 7 others

This is craziness. I don’t think Apple should be investing so heavily in the Chinese economy given their track record on human rights and the environment.
Reactions: George Dawes, rikuvalpas, GirlinCali and 18 others
You must log in or register to reply here.
Share:
Facebook Twitter Reddit Email Share Link
Register on MacRumors! This sidebar will go away, and you'll see fewer ads.
Sign Up
Top Bottom