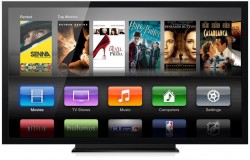 Back in February, former TechCrunch writer and Google Ventures partner MG Siegler reported that he was hearing "chatter" about Apple making a significant push into television in the fall of this year. While Siegler was unable to say whether the push would include an actual television set from the outset, he believed that something was indeed happening, whether it be opening up the existing Apple TV up to third-party developers or launching a new Apple TV set-top box with expanded capabilities.

Siegler appeared on yesterday's episode of The Talk Show with John Gruber, and near the end of the podcast talk turned to Apple's plans for a lower-cost "iPhone 5C" and the iWatch. But as noted by Business Insider, Siegler also slipped in a brief comment indicating that Apple may still be planning some sort of television announcement for "as soon as this November". The relevant bit begins at the 1:27:00 mark of the podcast:

Not to go into rumor central here but the latest things I've heard, that some sort of television product -- not necessarily a television screen but something -- could be coming as soon as this November. And I think there's some surprises there about what it could actually be and I don't know this for sure yet, but there's been whispers about, so I'm not going to write anything about it, but there's whispers out there that the interaction with it could be the interesting thing. People have talked about voice, but I think that that might be out the window and there might be some new way to interact with whatever this thing is.
Click to expand...

Apple has been expanding its Apple TV offerings in recent months, working more closely with TV content providers to host their content on the set-top box. Back in June, Apple added several new channels to the box, including WatchESPN, HBO GO, Sky News, anime site Crunchyroll, and music concert and documentary streaming service Qello. Apple is also close to launching a Time Warner Cable app and television network The CW has said that it is working on an app for the device.

Article Link: Apple Could Still Be Planning Television-Related Announcement for Late This Year

I get this feeling that Apple's TV is an AppleTV SDK + deals with content providers plus a 4K monitor and not any kind of integrated smart TV.

And I would be perfectly happy with that.

Or, ya know... they could not be. You know, like last year and the year before that?

Apple will merge with MS and the Apple TV will be controlled by a Kinect.

Remember what Jobs said in his biography about the control for a new television: "It will have the simplest user interface you could imagine."
O

I hope Tim Cook does not fuel any rumors anymore regarding iWatch or iTV. Just show when its ready, no more promises.

Another option: Apple getting into a distribution deal with a content provider to offer their programming on the Apple TV. Sony just announced a possible deal with Viacom this morning, so who know if this opens any floodgate's.
Last edited: Aug 16, 2013

oliversl said:
I hope Tim Cook does not fuel any rumors anymore regarding iWatch or iTV. Just show when its ready, no more promises.
Click to expand...

Dude we need rumors in order to survive a boring Friday afternoon or Monday morning at work....

Does this mean the gawd awful AppleTV interface will finally get a redesign?

An iTV or Apple TV SDK, either one Im really excited about! Hopefully there is some kind of preview in the fall event later this year!


Rogifan said:
Does this mean the gawd awful AppleTV interface will finally get a redesign?
Click to expand...

I don't think Apple needs to launch new hardware--like an Apple branded television. The real revolution would be if Apple somehow managed to convince content providers like HBO to offer their programming without also requiring an expensive cable package.

If they are working with Time Warner Cable though--I doubt that will happen.

If it's some voice interaction, it won't be released here.

I'm irked that Siri is still not supporting my country despite Apple hiring Siri staff for my language a rather long time ago now.

So everything about voice from Apple kind of makes me worried...

gmcalpin said:
I get this feeling that Apple's TV is an AppleTV SDK + deals with content providers plus a 4K monitor and not any kind of integrated smart TV.

And I would be perfectly happy with that.
Click to expand...

How long it takes to come out with a television once you have the idea ? I hear it for over 3 years so far..

A year ago I was excited for this. Now not so much so anymore.

I have to admit: this has me stumped too. It's going to bug me all day.

1member1 said:
How long it takes to come out with a television once you have the idea ? I hear it for over 3 years so far..
Click to expand...

Thats what I love about Apple, doesnt matter how long it takes, but it will be nearly perfect for a release.
X

Does that mean I need to Think Different?
J

sonicrobby said:
An iTV or Apple TV SDK, either one Im really excited about! Hopefully there is some kind of preview in the fall event later this year!

Why is it awful? :[
I personally love it!
Click to expand...

I used to love the interface too...until I ditched a cable box in my bedroom and started using the AppleTv exclusively.

There should be one main list of live content based on what applications you are signed into(such as ESPN), and then an "on demand" listing of shows/movies from Netflix, HBO and other streaming sites you are logged into.

Navigating from one app to another app to switch from Netflix to ESPN(for sports) or HBO Go is kind of annoying......

There needs to be one interface showing all options - by show/movie/etc, not app - that increases content listing based on what apps you are signed into.
O

who cares, roku is way better than apple TV, apple will have to bring out something really significant, something really "must-have" if they want me to join their ship.
i wonder how their recommendation app will work
M

1member1 said:
How long it takes to come out with a television once you have the idea ? I hear it for over 3 years so far..
Click to expand...

There are other factors than just Apple saying, "Hey, let's make a 4K TV!"

You have to wait for LCD panels of the right density to be cheap enough to make millions of them in a year and still sell them for under… I dunno, three grand, you have to get the content providers in line to even OFFER 4K content…