Apple Debuts 'Everyone Can Code' Program to Teach Kids Swift

Today at its September 2016 Special Event, Apple announced a new ConnectED program called Everyone Can Code. The program is designed to help students around the country learn how to program. 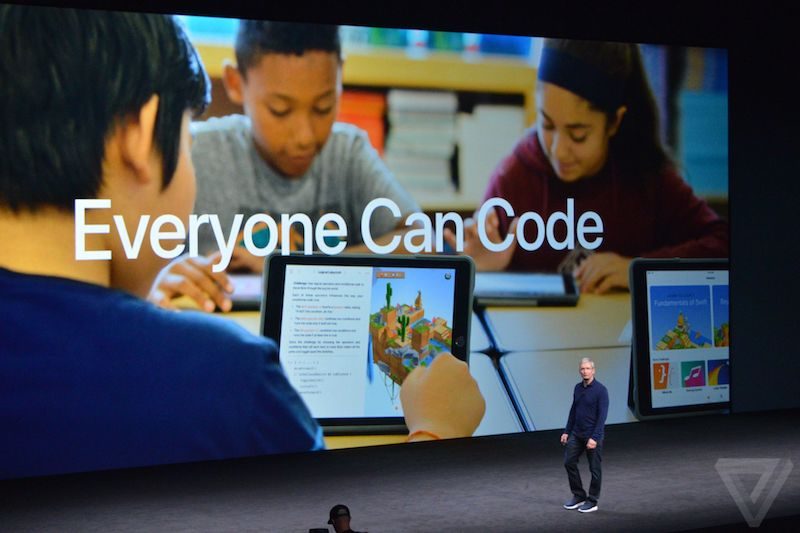 Image via The Verge​
Everyone Can Code will begin by teaching kids how to code in Swift, Apple's own programming language. It'll use the Swift Playgrounds iOS app and Apple CEO Tim Cook said that it will benefit the more than 100 schools that have signed up to teach Swift since June.

We've always believed that education is a great equalizer, a powerful force for change, for good, and we've always believed that our products could have a positive impact on teachers and students. But we're keenly aware that not every school can have this impact. That's why we're so deeply committed to ConnectED, a national initiative combining government and leading technology companies to bring that technology to underserved schools.

I personally visited several of these ConnectED schools and the program is having amazing results. Kids are engaged like never before and they're learning like never before, and this is how it should be.
Click to expand...

Apple announced that 114 ConnectED schools will be up and running by this fall. Apple has also delivered a Mac and an iPad to 4,500 teachers, put an Apple TV in every ConnectED classroom and has given 50,000 iPads for students.

"The ConnectED grant has meant a complete transformation," said Trina Siegfried of Crane Elementary School. "The students are having fun. They're more engaged. Most importantly, we're seeing a real love of learning."

Apple also announced a new real-time collaboration feature in iWork that will enable not only students and teachers, but businesses to work together much more effectively.

For example, Apple demonstrated how multiple users could edit the same Keynote presentation live at the same time without confusion, in private or in public, using apps on Mac, iPad and iPhone.

Everyone or just students?

MacRumors said:
Apple also announced that 114 ConnectED schools will be up and running by this fall. Apple has also delivered a Man and an iPad to 4,500 teachers, [...]​
Click to expand...

Did I read somewhere that Apple is giving teachers free MacBook Airs?