Apple's sudden decision to disallow PCalc's previously approved widget is somewhat surprising as the app is featured in multiple places in the App Store, including a section called "Extend Your Apps" featuring apps with unique widgets, and "Great Apps and Games for iOS 8," which also features a selection of Notification Center widgets.

Apple has told me that Notification Center widgets on iOS cannot perform any calculations, and the current PCalc widget must be removed. - James Thomson (@jamesthomson) October 29, 2014
Click to expand...

PCalc was one of the first apps to be updated for iOS 8 and along with being featured on MacRumors in a list of apps with Notification Center integration, it was lauded for its convenient and unique use of the Notification Center in App Store reviews and in iOS 8 coverage from a variety of sites. 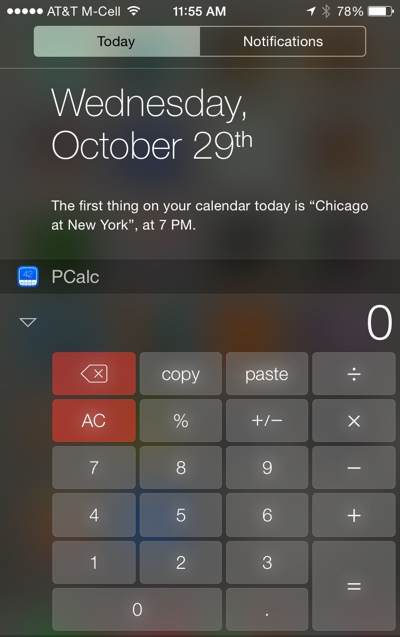 Apple appears to have some fairly strict guidelines governing the proper usage of Notification Center widgets. PCalc is not the first app that's facing the removal of its widget, as Apple previously pulled Launcher from the App Store. Launcher installed a Notification Center widget that provided access to quick actions like making a phone call, opening a pre-defined Maps route, or sending a tweet.

Apple's App Extension guidelines do clearly state that Notification Center widgets should have a "simple, streamlined UI," a limited number of interactive items, and specifies that a widget is "not a mini version" of an app, but it does not appear to expressly disallow calculations. There's also a Pcalc app for OS X Yosemite that brings similar functionality to the desktop Notification Center and it is unclear whether Apple will also require the removal of that widget.

For the time being, PCalc can be downloaded from the App Store for $9.99, with access to the Notification Center widget included. [Direct Link]

I don't get it.
What, does it compete with the built-in calculator app? Duplicate functionality?
Comment

Ridiculous. Reminds me of the early days of the App Store when they rejected apps from "duplicating existing functionality."

I don't understand why Apple does this. It just makes users mad and their features less useful.
Comment

Is Apple even thinking from the user's perspective? It's really convenient to perform quick calculations without leaving the app, then double clicking to go back to where you were.

Sometimes Apple just makes asinine decisions. This is one of them.
Comment
J

But why? wtf is wrong with you Apple?
Comment

How about THEIR calculator widget in Yosemite then? Hmm?
Comment
X

WTF? I constantly use the PCalc widget. Looks like I won't update the app anymore.
Comment
J

How about THEIR calculator widget in Yosemite then? Hmm?
Click to expand...

This is ridiculous. Apple should not only be allowing this widget, they should be opening up all the developer frameworks a lot more.
Comment
C

nickhutson said:
£10 for a calculator? No thanks.
Click to expand...

PCalc is a real calculator, it can do a lot more than adding two numbers.
Comment
R

Oh, Apple. So close, yet so far away.
Comment

What is Apple's motivation for doing this? If someone doesn't like a widget app, they can just remove it. Is it a security concern? I don't get it.
Comment

The developer brought this upon himself, IMO; this seems to be in direct defiance of Apple's regulation prohibiting the use of code in a NC widget. If you cannot convey your extension in a series of images, evocative facial expressions, and gesticulations, you're not trying hard enough. That's just poor programming.
Comment
J

Feel sorry for everyone who paid $10 just for the widget...
Comment

Psssshttt... what about the app Wdgts, which also offers a calculator for the notification center?
Comment

i kind of hoped that the apple NC would be like the Android one, with a bit more flex and interactivity.
Comment
A

I bought this app for both my iphone and macbook air based on Apples promotion of the widget. I wonder if Apple will give me my $20 back since they are removing what was offered as a benefit.
Comment

That's really not cool for developers who will invest in making an app only to not get the planned revenues due to unpredictable Apple rules.

This kind of behavior from Apple is a good way to encourage developers to not push the boundaries of what an app can do, and to "play it safe" with unoriginal apps that at least are guaranteed to not be banned.
Comment
J

adcmfrank said:
I bought this app for both my iphone and macbook air based on Apples promotion of the widget. I wonder if Apple will give me my $20 back since they are removing what was offered as a benefit.
Click to expand...

When and where did Apple promote this widget?
Comment

"Apple's App Extension guidelines do clearly state that Notification Center widgets should have a "simple, streamlined UI," a limited number of interactive items, and specifies that a widget is "not a mini version" of an app"

In other words, they want the Notification Center to be useless - to look pretty but do nothing helpful.
Comment

-LikesMac- said:
I don't get it.
What, does it compete with the built-in calculator app? Duplicate functionality?
Click to expand...

My thoughts exactly, why would someone need this? Do we really need the ability to swipe up for a calculator AND swipe down for a different one?


thedeejay said:
So much for "moving forward" Apple.
Click to expand...

laugh out loud. I love how MR is plagued by people that "use Apple products, while they simultaneously hate Apple"

Oh yeah, isn't that what the hipster-religion is all about?


nickhutson said:
£10 for a calculator? No thanks. I'll just swipe up.

The Android-style notification-center metaphor that iOS & Yosemite uses is all wrong.

Notifications should be on the icon or the doc, as a pop-up bubble, and not on a separate window.

That way you clearly know what the notification source is, and can open it right there.

The icons and the dock are really the heart of the UI, not the windows.
Comment

widgets on iOS cannot perform any calculations
Click to expand...