Local news affiliate ABC 15 Arizona is reporting that Apple's facility in Mesa, Arizona, which it acquired through its ill-fated partnership with GT Advanced last year, caught fire this afternoon. While the second-alarm fire has since been extinguished on the rooftop, which is equipped with multiple solar panels, local firefighters and emergency crews remain on the scene and authorities are investigating the cause of the blaze. 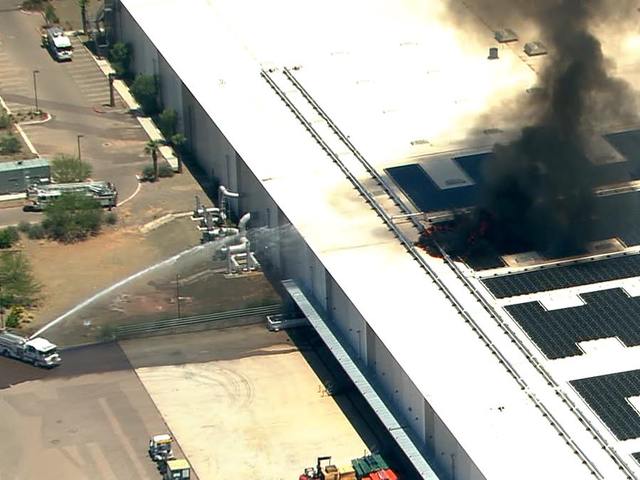 Update 12:20 PM Pacific: ABC 15 reports that fire crews from Mesa, Gilbert and Superstition Fire worked together to extinguish the fire within 35 minutes, and there are no reports of any injuries. The local news affiliate says the fire appears to have originated on the solar panels on the roof, and does not appear to have spread inside the building.

come on Apple, put on your big boy pants...

As long as everyone is ok.

Looks like those solar panels got a little too hot.

That plant is cursed.
X

Someone's out to claim some insurance money!

Glad nobody got hurt. That would've gotten bad.
T

burn it down and collect then insurance
L

It's just Jony reinventing fire. Calm down, everyone.

He did say he wanted to travel more often...
P

Must. Have. Sapphire.
L

It's an electrical fire. You can tell by the color of the smoke.
Z

There goes their carbon footprint savings for the year... Darn....
X

Peace said:
It's an electrical fire. You can tell by the color of the smoke.
Click to expand...

No, the color indicates that plastic or plastic-like materials have burned. It doesn't tell you what started the fire.

Xgm541 said:
No, the color indicates that plastic or plastic-like materials have burned. It doesn't tell you what started the fire.
Click to expand...

While that's true most electrical systems have plastic insulation that burns black.

I'm guessing the whole building is off the grid with no power.
2

It will be interesting to hear what the cause was. After they took out all the sapphire ovens out, isn't it pretty empty right now? I know that the article says Apple planned to convert it, but I don't think anything has been done yet.

Geeze, GTAT left one oven in place and conveniently forgot to turn it off when they moved out.
T

NT1440 said:
Geeze, GTAT left one oven in place and conveniently forgot to turn it off when they moved out.
Click to expand...

It was the only functional oven. That's why they had to close.

They finally got the G6 up and running so

Reason077 said:
Someone's out to claim some insurance money!

Quu said:
That plant is cursed.
Click to expand...