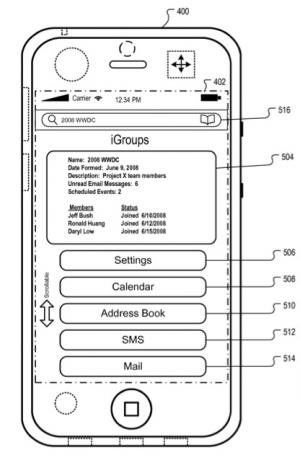 Patently Apple points to a patent application from Apple published today addressing technology to allow users at large events such as concerts, tradeshows, and rallies to utilize their mobile devices to automatically create social networking groups by exchanging "tokens" using such wireless technologies as Bluetooth and Wi-Fi.

The patent application, which was filed in September 2008, describes an example of the technology involving Apple's Worldwide Developers Conference, specifically using an "iGroups" application on the iPhone to demonstrate the process by which attendees could invite one another to a group and access information related to group discussion and activities on their devices. 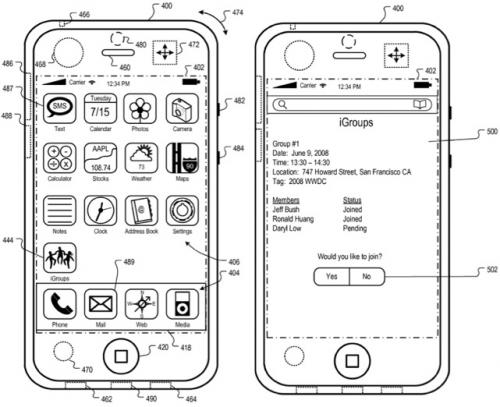 A similar example shows how concert attendees could set their mobile devices to participate in the formation of a group at the event.

Groups created using the method could then utilize functionalities such as e-mail and calendaring applications to interact with each other. The specific "rock concert" example poses a situation in which the musicians on-stage could initiate a group, linking to attendees near the front of the audience. The technology could also "daisy chain" to allow those further back in the crowd to still join the group via attendees further forward even if out of range of the musicians.

Oh that is just awesome...

They're a dime-a-dozen concept. MSN use to have groups.

It's a cool idea--as long as each individual can control the information that is shared with others.

So now Randy Newman can group text instead of talking to the keynote attendees between songs. Hmmm...

I think that built-in location aware networking could bring cool possibilities to the iPhone, but these proposed examples don't excite me.
B

Maybe I'm old fashioned, but I remember a time when people attended a rock concert to actually watch and listen to the band playing instead of fiddling around with their phones...

Having a dedicated app for this would be great.

If Apple were smart they'd make this app for Android and Blackberry and Palm as well. These kind of things only take off if EVERYONE at the convention uses it. But...Apple making apps for other phones?? Sounds crazy? No more so than coming out with iTunes for Windows, which helped them sell a ton of iPods.

This thing would be great advertising for the iPhone. If you're at a convention and use this Apple software on your Blackberry all week long, you start to think "What else is Apple giving those iPhone users that I don't have...?"
I

The i moniker before everything is getting so incredibly old, it just makes Apple look like they;re to lazy to come up with original names for their products, it should have stopped with iPhone!
K

iPhoney:) said:
The i moniker before everything is getting so incredibly old, it just makes Apple look like they;re to lazy to come up with original names for their products, it should have stopped with iPhone!
Click to expand...

iAAPLshareholdersLaughingAllTheWayToTheBank don't agree with you.

Plus, it's an absolutely effective branding strategy. If you see the 'i' prefix anywhere on a technology product/service, an individual's first inclination is to think that it's related to Apple.

IBM did the same thing with their old corporate motto 'Think'.

There is no other consumer products company that is so closely identified with a single letter of the alphabet. That's very, very powerful in terms of consumer mindshare from a marketing standpoint.
W

Don't enough similar technologies already exist to constitute prior art? LoKast in particular already exists and is pretty similar to this.

Baumi said:
Maybe I'm old fashioned, but I remember a time when people attended a rock concert to actually watch and listen to the band playing instead of fiddling around with their phones...
Click to expand...

Yes, back in the day going to a rock concert was just like, say, attending an opera at the Met. Yep, that's just exactly how it was. Not.
R

Sounds cool. Networking with other people is fun if you can find like-minded people. This would be especially cool when going to events without friends or coworkers. It would make it easier to find "conference buddies". ;-)

Could be interesting for finding friends when your our. Perhaps its something for 4.0 or just an idea that got patented and then discarded.

WestonHarvey1 said:
Don't enough similar technologies already exist to constitute prior art? LoKast in particular already exists and is pretty similar to this.
Click to expand...

You can do this with Bluetooth already, with the exception that it can't handle thousands of concurrent users, and it can't daisy-chain until it's out of reach of the original creator.

Hehe, look at Apple's stock price in the pic
B

I see this being a fun feature for students in a classroom... A rock concert? Must be a pathetic group if everyone has their cell phones out texting each other. Maybe I am tool old to understand that one (30).

Baumi said:
Maybe I'm old fashioned, but I remember a time when people attended a rock concert to actually watch and listen to the band playing instead of fiddling around with their phones...
Click to expand...

I also remember when you could lose your friends and have to wander around like a dumbass forever trying to find them before or after the show (or during intermission, or sometimes during the show) and end up missing half a set because you're freakin' out of your mind on mushrooms. Or whatever.

So there are good ways to use this sort of thing, too. Just like, oh, EVERYTHING.

Personally, I think the Rock Concert thing is a poor example... there are so many cool applications for this sort of thing. When you look at the social aspect, this has so many applications in business and for play. Someone mentioned tradeshows and conferences... great application!

This will be HOT!
P

What kind of concerts do apple people go to?
I can't ever remember feeling saying to myself at a concert: " Hey this concert is great, but it lacks the opportunity to digitally socially network to those around me via my iPhone".

WestonHarvey1 said:
Don't enough similar technologies already exist to constitute prior art? LoKast in particular already exists and is pretty similar to this.
Click to expand...

Not exactly in the way the Apple talks about, there can be many similar technologies, you just can't use their implementation of the technology. Just like there are many other multi-touch devices out there but they aren't using the same implementation that Apple has patented. Plus Lokast was released in 09 where this patent was submitted back in Sept 08.

This is something I don't think has ever been done with mobile devices.

It's basically a secure channel to communicate data between people in a group using any type of communication method. Can be very useful for geocaching groups, study groups, researchers, party groups and so many things.
You must log in or register to reply here.
Share:
Facebook Twitter Reddit Email Share Link
Register on MacRumors! This sidebar will go away, and you'll see fewer ads.
Sign Up
Top Bottom