As revealed in dozens of new job postings on its website, Apple is once again looking to improve its much-criticized Maps application by increasing the size of its team dedicated to verifying mapping data. The postings are for "ground truth" local experts and regional managers in a number of different locations around the world, including several in the United States, Brazil, Japan, the United Arab Emirates and Europe. 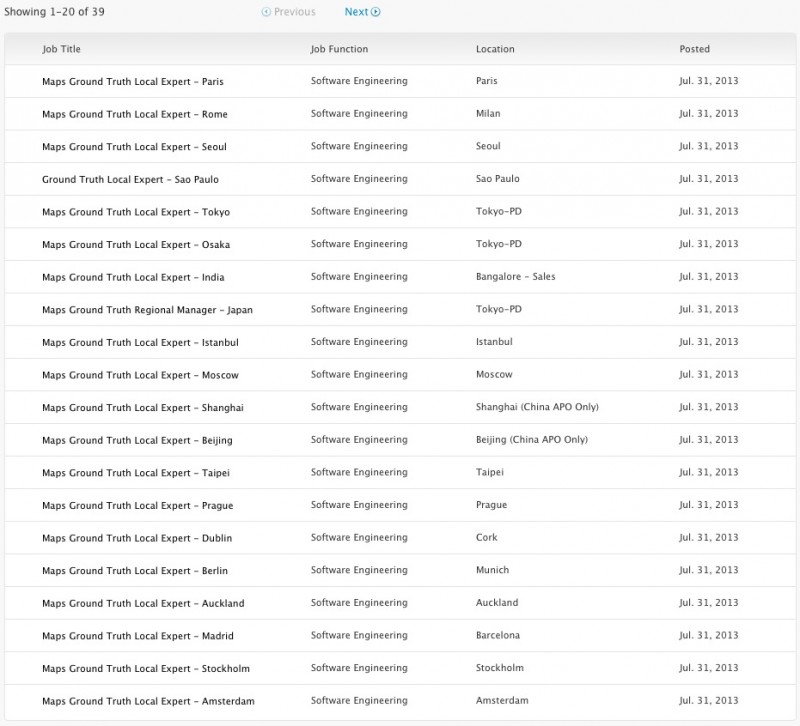 The job descriptions for the "Local Expert" roles are as follows:

The Maps team is looking for people with a passion for mapping, great testing skills, and deep regional knowledge to help us build better and better maps. In this position, you will be responsible for the quality assessment of Apple Maps for your region, including both data and map services.  You will monitor changes to our maps, provide feedback on unique local map requirements, collect ground truth information, and evaluate competing products.
Click to expand...

The roles call for someone with a bachelor's degree or equivalent, prior experience in quality assurance and a "detailed knowledge of the unique features of your local area, including preferred place names, prominent businesses, public services, seasonal events, driving routes, landmarks, and road names".

The positions are clearly intended to help Apple improve the quality of its mapping service, which since its release has been plagued with problems, including mislabeled towns and cities, inaccurate driving directions, as well as establishments (such as restaurants and bars) which had been closed for years.

MacRumors first noticed Apple specifically hiring a ground truth expert in Australia back in February, with the company moving to hire managers for the program in March. With this latest batch of job listings, Apple is clearly looking to fill out its team with a variety of regional and local positions.

Apple's Maps issues in iOS 6 prompted an open letter by Tim Cook on the company's home page and are rumored to be one of the reasons why Scott Forstall, Apple's previous Senior Vice President of iOS Software, was ousted from the company back in October 2012. The company has acknowledged that it is working hard to improve its mapping services, which are coming to OS X Mavericks later this year.

In just the past few weeks, Apple has been revealed to have acquired small mapping firms Locationary and HopStop as it seeks to improve its own services.

what was wrong with Verita Terra?
V

Amsterdam! That's good, some stuff near me isn't quite right. I guess I'll report it....

Apple Maps has improved a lot here in LA since launch. Good to see that the pursuit of accuracy in their maps is a priority. After all, what good is a map if not precisely accurate?
Street View would be nice too.

A Ground Truth Expert on Berlin working in Munich? This can not end well.

"Ground Truth," as if there is an equally true "Map Truth" that might be in conflict with it. A bit Orwellian, no?

The Yelp POI location data is utter crap. They should've gone "all in" with a team like this the same day they made the decision to remove Google mapping data from the Maps app.

I'm not complaining that they are doing this, just that it took this long to get some traction around correcting POI location data.

rex3 said:
"Ground Truth," as if there is an equally true "Map Truth" that might be in conflict with it. A bit Orwellian, no?
Click to expand...

It really does. Also sounds like something out of the movie Brazil. The Department of Ground Truth.

rex3 said:
"Ground Truth," as if there is an equally true "Map Truth" that might be in conflict with it. A bit Orwellian, no?
Click to expand...

Whether or not it sounds Orwellian, "Ground Truth" is a common industry term.

"Five years *of* experience" sounds much better than apostrophe. Next candidate please...
T

I love how one person per country is apparently enough.

Either's valid, but having neither 'of' nor an apostrophe is incorrect.

When do I start?
M

I guess the attention to detail and strong written English skills weren't necessary for HR. Or perhaps it is a test. If an applicant doesn't point out the error they aren't considered. Nah!
M

The Apple mapping mess is a lot better now than when first launched, I've found it quite good in the USA urban areas I've tried it in side by side with my wifes Android phone using Google maps. It's lacking in rural areas. I don't know many years they're behind Google in this effort, but it's not insignificant.
M

The Phazer said:
I love how one person per country is apparently enough.
Click to expand...

I think it is less one person per country than it is one person per major metropolis. Which, I honestly think is a bit backwards. Areas with large population densities are more likely to have errors reported through the app. They really should be focusing on giving feedback for reports (to let people know that they are listening and taking action) and focusing on less populated areas for verification. After all, they weren't hammered in Australia for having a missing pub in Sydney, but sending people into the middle of the desert.

No, at least in Spain the duties are for Madrid, the capital but the job location is Barcelona, the second largest city

The same for Italy and Germany.

Did they have to wait for a year before opening such positions?

How about just reading some of the reports users send through the app itself. I know I have sent a dozen myself about the same location and Apple still has not fixed it.

jonnyb said:
Either's valid, but having neither 'of' nor an apostrophe is incorrect.

Nearest location to you seems to be in Dublin. Still interested?
G

Apparently they prioritised all previous Ground Truth job postings, because they had almost 1 each day.

Look again. There's a position in London. Unless Dublin is next to London on the map you're looking at?