Apple will report its financial results later this hour for the second quarter of the 2015 fiscal year, a three-month period spanning January through March that directly followed the holiday shopping season. Apple has offered guidance of between $52 billion and $55 billion in quarterly revenue, while the average of all analysts combined forecasts the company's revenue during the quarter marginally higher at $56.84 billion.

Philip Elmer-DeWitt at Fortune has compiled a pair of charts that aggregate all predictions by independent and professional analysts for Apple's revenue, EPS, gross margin and number of iPhones, iPads and Macs sold during Q2 2015, and it's believed that Apple will report double-digit growth year-over-year as sales remain strong and the company's momentum continues in 2015. 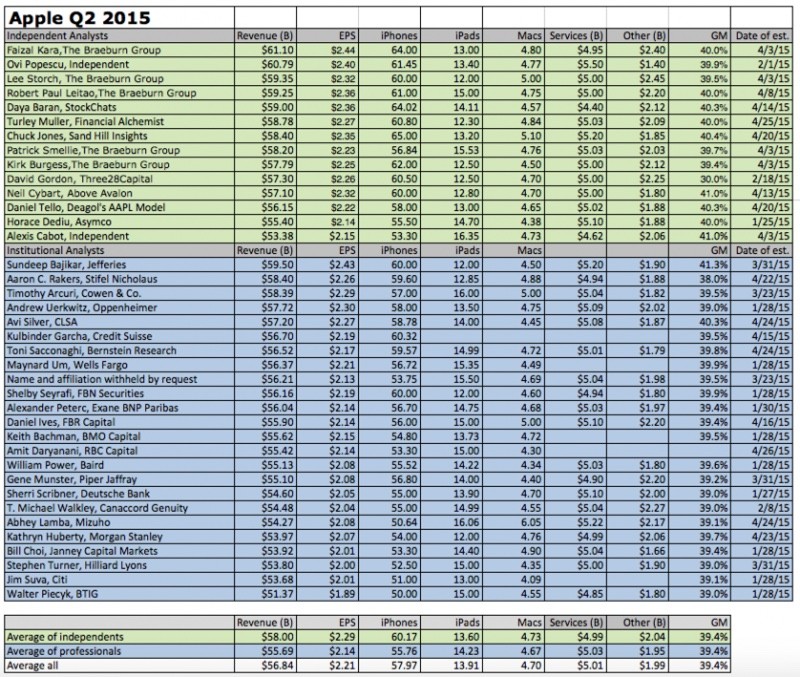 MacRumors will be providing live coverage of Apple's financial results as they are reported around 1:30 PM Pacific (4:30 PM Eastern), including the subsequent earnings conference call with CEO Tim Cook and CFO Luca Maestri at 2 PM Pacific (5 PM Eastern). At that time, we'll have a clearer picture of just how well Apple managed to perform in the quarter.

the apple tree continues to grow

... Which will put Android to shame.
M

So I guess Apple is *not* doomed?

He already said they won't be giving figures.

mw360 said:
He already said they won't be giving figures.
Click to expand...

Where was that reported? I don't see it in the MR article.
A

Michael Scrip said:
So I guess Apple is *not* doomed?
Click to expand...

These are forecasts.. We'll see when they report.
A

The best you can hope for is the prepared statements to say something like "Our recently unveiled Apple Watch has finally begun pre-orders and we are thrilled with the phenomenal demand. We are selling them as fast as we can make them"

Then the analysts will try to ask about it anyway, even though they know Tim won't tell them, and Tim will tell them that they won't comment on specifics but demand is thrilling, and the next quarter call blah blah.

applesith said:
Where was that reported? I don't see it in the MR article.
Click to expand...

Cook said on last quarter's call that they'll be lumping Apple Watch into the "other" category, so won't be reporting sales numbers on a quarterly basis.

They could still announce some numbers today as a one-off announcement, although they may not if shipments remain low with the order backlog.
T

This is for january to march, the watch went on sale 3 days ago

applesith said:
Where was that reported? I don't see it in the MR article.
Click to expand...

Wait... so does this mean the stock will tank?
2

abhishake said:
These are forecasts.. We'll see when they report.
Click to expand...

True... but the forecasts seem pretty good (iPads look like they'll be down... but everything else is way up)

I'm not seeing how this announcement will say anything doom-related... which was my point earlier

TWSS37 said:
This is for january to march, the watch went on sale 3 days ago
Click to expand...

There is the possibility of still commenting on it because it was a recent launch.
M

TWSS37 said:
This is for january to march, the watch went on sale 3 days ago
Click to expand...

Yes... but Tim will have a podium to speak from this afternoon. Lots of ears will be listening... from your friendly neighborhood blogger to the mainstream media.

He may not give hard numbers... but I'd be shocked if he doesn't say something about the Apple Watch.

SMIDG3T said:
... Which will put Android to shame.
Click to expand...

Just couldn't help yourself, could you?

Someone ALWAYS has to mention Android right away in these threads. It's like clockwork.

spectrumfox said:
Just couldn't help yourself, could you?

Someone ALWAYS has to mention Android right away in these threads. It's like clockwork.
Click to expand...

You don't have to apologize to me. I'm not the one making Apple users look petty.