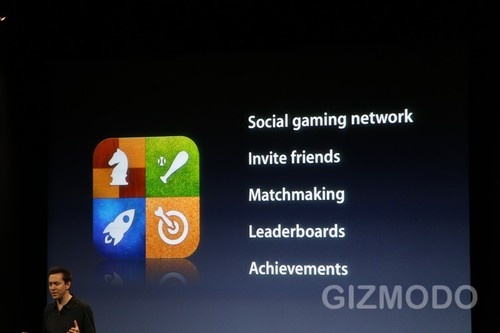 Image courtesy of Gizmodo
Another major announcement today was Apple's intention to provide a centralized Game Center that offers users a way to track achievements, high scores and offer matchmaking services for online multiplayer. The system sounds similar to Microsoft's Xbox Live service which has been very popular.

The move shows that Apple is very serious about iPhone gaming and sees it as a major focus for the platform. Several companies, however, will be impacted by Apple's move. A number of small companies have already established themselves as similar service providers on the iPhone. These include OpenFeint, AGON, and Ngmoco's Plus+ system. The problem with these systems has been the fragmentation requiring players to sign up for multiple services.

I rank this a miss. The iPad a hit. Doesn't do anything for me.
R

I think this is going to be awesome! I wanted it, but kind of surprised it's actually happening.

Makes sense considering the constantly increasing gaming focus. Will be interesting to follow and potentially develop for.

Too bad for the existing providers though...
W

Could be so much better for users.

I watched a pod cast the other day about the success a developer had with Ads, it was supposed to be a discussion around iPhone development and experience. I came away quite annoyed that the developer spent so much time talking about revenue from ads instead of the overall design/development/deployment and user feedback. Looking back I can see his point.

Bottom line for me though is if you're going to sell your apps soul to ads, I rather use this iAd idea instead of crappy web based ads (which I hardly ever click myself - ie except MacBundles).

It is a bummer for those existing companies. One hard thing about a totally new industry like this is it's constantly changing and will be for awhile.

RIP Open Feint and Plus+ .

Jobs mentioned that it would take a lot to "move the needle" on Apple's stock price.
I think this and iAd will contribute to that move. It portends ads delivered in the middle of movies and television and music (via Lala). Apple is going squeeze as much revenue out of its hardware-software-delivery synergy.

stagi said:
It is a bummer for those existing companies. One hard thing about a totally new industry like this is it's constantly changing and will be for awhile.
Click to expand...

Yeah.... even if the developers don't like the new game center you can almost guarantee the masses will pester about it almost forcing devs to utilize it. It'd suck to be an employee of one of the social gaming networks today... it'd be like hearing you got laid off via the news...

Achievements? This is gaming we are talking about? LOL!

justinfreid said:
I think this and iAd will contribute to that move. It portends ads delivered in the middle of movies and television and music (via Lala).
Click to expand...

Uh, no, it doesn't. That would be an example of an ad that "sucks," and Steve explicitly said he won't do that. If you pay for a movie or TV show, you've earned the right to avoid ads.

Compile 'em all said:
RIP Open Feint and Plus+ .
Click to expand...

Don't forget AGON which the awesome Tilt to Live uses.

It was actually a Preview of the Game Center as it will not be deployed to the iPhone 4.0 until "later this year." Likely meaning a 4.1 or 4.2 upgrade when the iPad gets the 4.0 release or pre-holiday. This service may have a bigger impact on iPad gaming than on the iPhone.

i like this idea and I hope games add 'online' modes. i play bejeweled which posts scores for you and your facebook friends. and it would be fun to have similar boards for other games. maybe even be able to challenge folks to live games across networks. like playing Air Hockey with my nephew across country. but I also hate having to remember different logins etc.

my only hope is that you can pick features. like if i'm not interested in the 'matchmaking' i can click that off and folks won't try to flirt and crap with me. or if I want to play but not chat I can do that. and so on
J

ValSalva said:
Achievements? This is gaming we are talking about? LOL!
Click to expand...

It's a term used in gaming for "trophies" or what-not that you earn in a game. It might be for achieving a certain point level, or for completing certain tasks, etc.

I worked on the server side developing exactly this kind of stuff for a year at Sony. (Moderation/complaint system for Mod Nation Racers and MLB 10, among other stuff.)

What's good about this is that if developers jump on the bandwagon, it creates a common UI and set of capabilities and expectations across games, so there's no re-learning with different games. A lot of these back-end functions aren't often used by the typical user (moderation/complaints would be a good example) so it's important that they are consistent when they are used, otherwise they are just too much trouble for the end user to bother with.

It will be interesting to see if they can make some kind of flexible leaderboard system that will work across different types of games. The problem is there are so many different ways of scoring and widely differing kinds of statistics that you'd want reported. (LOL, for example, a car racing game and a baseball game have little in common in that regard...)

I liked it better when it was called xbox live.

skyehill said:
I liked it better when it was called xbox live.
Click to expand...

How do you suppose they could integrate XBox Live into it?

SilentPanda said:
It'd suck to be an employee of one of the social gaming networks today... it'd be like hearing you got laid off via the news...
Click to expand...

It's a great 'extra' for those who enjoy casual gaming on the iPhone/iPad, but ummm, this won't do anything to existing platforms like XBL or PSN since they are different markets.

I would be AWESOME if they could integrate XBL and PSN... but that obviously will never happen.

cumanzor said:
It's a great 'extra' for those who enjoy casual gaming on the iPhone/iPad, but ummm, this won't do anything to existing platforms like XBL or PSN since they are different markets.
Click to expand...

I was referring more to Openfeint and the like. I know it won't cannibalize XBL or PSN.

I guess it was Cupertino's turn to fire up the photocopier, and they want us to know they know we know

Complete rip off of MS Xbox LIVE. What happened to innovation Apple? It looks like Apple is following the real innovators.
I

This is great news for the MMO I am coding.

I totally called this. Feeling pretty smug about my prediction.

This is less about xbox live and more about Facebook. The developers if Mafia wars and farmville can now make a comparable experience on iPhone and ipad. Lack of Flash aside (you can make those games using a number of technologies) the biggest obstacle was the social widgets; competing against family and friends.

Xbox live is fine, but there are more people playing farmville each month than there are Twitter accounts. Facebook is the target. Add micro transactions and Apple's 30% cut of the original app itself and you've got a pretty potent revenue stream.
O

DCstewieG said:
I guess it was Cupertino's turn to fire up the photocopier, and they want us to know they know we know

(not that I'm complaining, Xbox Live rocks)
Click to expand...

Puzzle Rocks (maybe i should point this)!
C