As part of the iOS 13.6 and macOS 10.15.6 updates, Apple is introducing new features for Apple News and its Apple News+ subscription service, including audio stories. 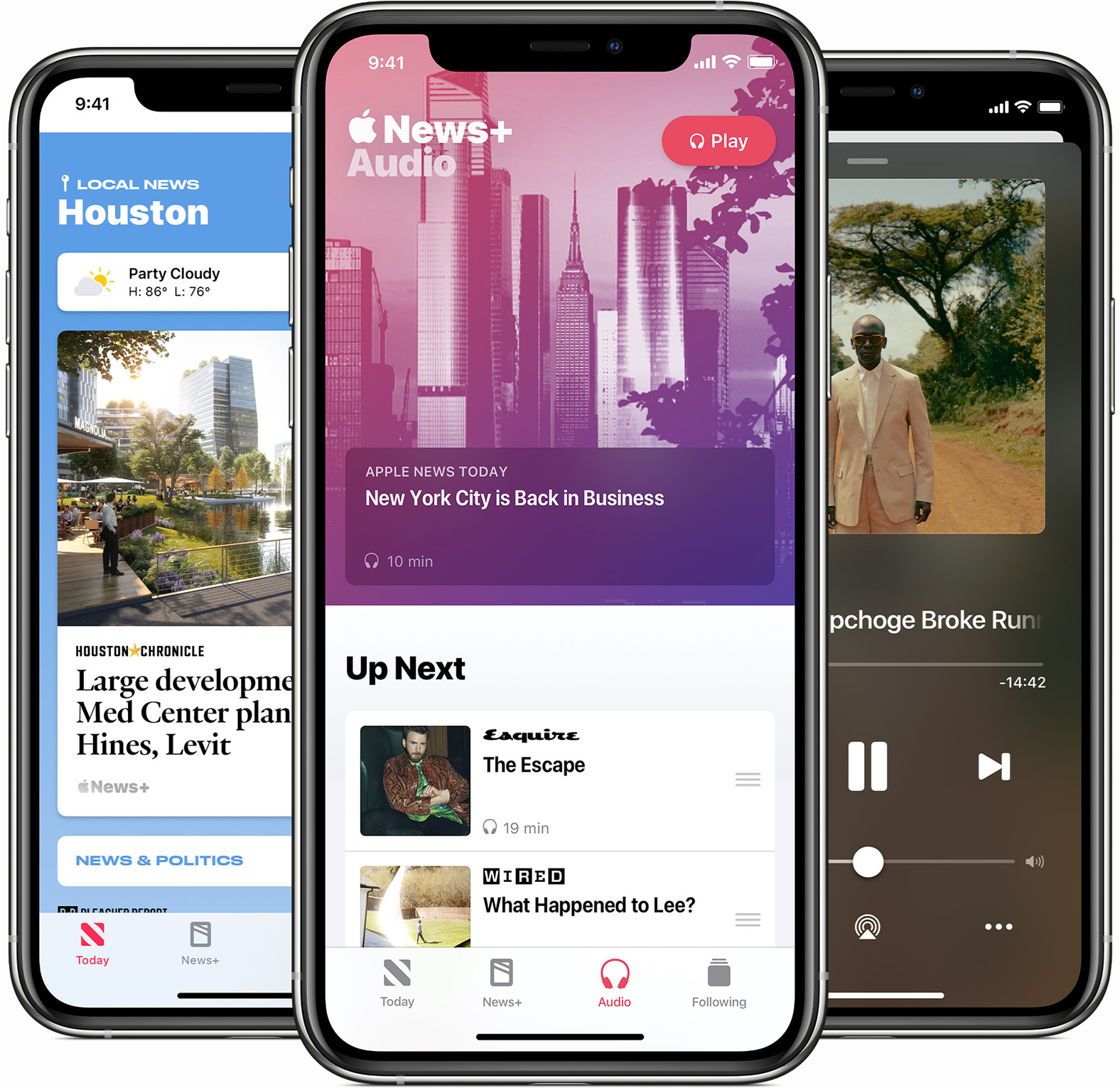 Apple News editors plan to release about 20 audio stories per week across a wide range of interests, with the stories narrated by professional voice actors. Apple says we can expect pieces from Esquire, Essence, Fast Company, GQ, New York magazine, Sports Illustrated, TIME, Vanity Fair, Vogue, Wired, and newspapers that include The Wall Street Journal and the Los Angeles Times.

Apple News audio stories are a feature limited to Apple News+ subscribers in the United States, but the daily audio news briefing, called Apple News Today, is free for all Apple News users.

Apple News Today will feature highlights of some of the "most fascinating stories in the news" and will be available Monday through Friday in the Apple News app in the United States and in Apple Podcasts.

Along with audio stories, Apple is adding new local and regional news outlets for readers, including The Charlotte Observer, the Miami Herald, and The News &amp; Observer from Raleigh, North Carolina, plus a curated local news experience available in the Bay Area, Houston, Los Angeles, New York, and San Francisco.

The curated news feature will include coverage of topics that are important to local communities like dining and restaurants, weather, news and politics, and more.

"Apple News showcases so much great journalism, and we're excited to help bring it to life in new ways with Apple News+ audio stories and a new daily news show, Apple News Today," said Lauren Kern, editor-in-chief of Apple News. "We also greatly value our many local news partners -- our new local news feature highlights their work for readers who live, and are interested, in those communities."
Click to expand...

Doesn't appear to be functional for me in iOS Public Beta.
J

Adding a focus on local and regional news is certainly a wise choice. Where it’s married to News+, I’m way more willing to pay for that than having access to hundreds of magazines that I wouldn’t read anyway.
Reactions: hieromonk, DJMarty, dman22 and 2 others

Poor Lauren Kern. Having to spout that nonsense to receive her pay cheque.
Reactions: twocents
N

Love that Apple News is now on CarPlay too! This better be in the next iOS 14 build too.
Reactions: hieromonk, FightTheFuture, dman22 and 2 others
C

Interesting that this appears to be iPhone only. On iPad (at least within iPadOS 14 Public Beta), the News+ Audio announcement page says "Listen to Apple News+ audio stories on iPhone."

I don't know why they'd keep it limited to mobile.
Reactions: Icaras

confirmed said:
Interesting that this appears to be iPhone only. On iPad (at least within iPadOS 14 Public Beta), the News+ Audio announcement page says "Listen to Apple News+ audio stories on iPhone."

I don't know why they'd keep it limited to mobile.
Click to expand...

It’s more likely the beta, tbh. I recall similar things happening in the past.
Reactions: dman22
A

Ubuntu said:
It’s more likely the beta, tbh. I recall similar things happening in the past.
Click to expand...

10.15.6 just released as well. In the release notes, no mention of News+ Audio, but it does include the Local News updates.

Really does look like Audio is iPhone-only. Strange choice.

I think this is a neat alternative to podcasting (like audiobooks for articles), but the story listing only has headlines, without a single word describing what the story is about. The only way to see some description is to long press it and choose "Read Story" to be taken to the text version.

Why would I want to listen to a 40 minute Wired story called "A Life Just Out Reach" without knowing anything about it (apparently it's about ALS)?
V

Can the audio be played at faster speeds?

Not working in iOS 14 public beta. Really hope the next beta fixes this. Really interested to try it out.
D

Curated news has me suspicious. I don’t need biased views serving me news. Right or left. I want facts and not articles disguised as news but are really editorial opinion pieces. Too many “reporters” today are really just spouting their opinions.
Reactions: erniefairchild1, twocents, hb_8919 and 10 others

I guess Apple News will be gone before it comes to where I live.
Reactions: leviderschreckliche
S

I have a love/hate relationship with News/News+, just the same as with the new Music app. Too many "we think you'll be interested in" aka "curated" instead of serving me what I followed or downloaded ... then there are times when I click on a link someone forwards one time, and throw the algorithm off for the next two months I get served with something I might not want to see again. I paid for News+ for over a year and cancelled it, no matter what I did; restricted stories in Today, blocked topics, blocked sources, reset identifier, reset the app, called Apple help ... I can't seem to figure it out.

There are times when I just want to tune things out, not because I'm insensitive, but because I want to focus and relax with what really interests me and lowers my blood pressure. I was hoping for a newsstand replacement where I can have all the magazines/subjects I'm interested in in one spot ... I now would much rather subscribe to individual magazines and call it a day.

Same "rant" applies to the Music app/service, I have the developer beta and iOS13 versions. Listen Now, Browse, and Radio seem to have overlapping content many times unrelated to the music type I listen to or I'm interested in because I clicked on a link someone sent me. Seems the library portion of the app is taking a back seat ... Paying for family Music, but daily I think I might just go back to buying songs and disabling all those other sections ... well anyway just my 2c.

I know in the grand scheme of things the above is very insignificant, and is just a click/tap away from me going elsewhere ... but why did Apple separate iTunes for music, podcasts, news, apps, and now it seems they're slowly merging them back together, with "stories" being everywhere as an example.
Reactions: chilly willy, 4487549, macpurist and 2 others
T

Why do they always make this stuff limited to the US?
There are News+ subscribers in the UK that would quite like access to this kind of stuff.
Reactions: hieromonk, insomniac86, Brenster and 4 others

Hopefully this is coming to the UK soon. I really enjoy Apple new plus.
Reactions: hieromonk and mjt2810
X

solideliquid said:
So, iPhone only? Hmm.
Click to expand...

Yeah, why is this? iPad seems like a perfectly good use case as well.
M