Apple is creeping closer to opening a new flagship store in Toyko's well-known Omotesando district. Previously reported to be scheduled for a March 2014 opening, an image of the store published by Mac Otakara shows significant progress has been made on the store. Although wrapped in a black shroud, the exterior of the building is starting to take shape, with the building appearing to bear a resemblance to the Apple's new Stanford store. 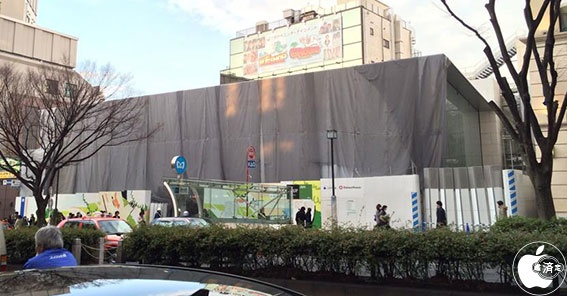 Just like the Stanford location, the Omotesando store appears to have floor-to-ceiling glass walls and a thin steel roof. Mac Otakara notes that the glass front and sides stand out from the silver-colored metal eaves. This same design is also evident in Apple's new stores planned for Portland, Oregon and Aix-en-Provence, France.

The Omotesando location will feature 20,000 square feet of floor space spanning three floors. Two of the floors will be underground, while the top floor will be above ground. Apple has been hiring employees to staff the store for over six months, and it will be the first new store Apple has opened in Japan since 2006.

The opening comes as Apple is seeing strong iPhone sales in Japan, with estimates from Kantar Worldpanel indicating that the iPhone 5s and 5c accounted for 76% of smartphone sales in the country in October, just after their debut.

Does the place really have the "?" in it?
Comment

two underground floors? wow! has that ever been done in an Apple Store before? usually it's just one floor below ground.
Comment
2

For those of you old enough to remember -

Cuban Missles said:
For those of you old enough to remember -

Who's the robot here, Apple or Japan for allowing another store there?…..
Comment

newyorksole said:
two underground floors? wow! has that ever been done in an Apple Store before? usually it's just one floor below ground.
Click to expand...

While it might be a first for an Apple Store, it's rather common in Tokyo for large stores to have more than one below-ground floor. In department stores, for instance, the two (sometimes even three) basement floors are generally where groceries and gourmet items are sold.
Comment

Man I really wish Apple would open a store in Yokohama. Getting to Tokyo is at least an hour train ride for me from Yokosuka down south. But I'm happy to have stores close by at all, so I guess I shouldn't really be complaining...
Comment
P

With only 2 Apple stores in the entire Tokyo region (an area of over 2,000 square kilometres), this new Omotesando store is only 1.5km away from the Shibuya store.

I can understand why people are confused by this choice of location.
Comment

japanime said:
While it might be a first for an Apple Store, it's rather common in Tokyo for large stores to have more than one below-ground floor. In department stores, for instance, the two (sometimes even three) basement floors are generally where groceries and gourmet items are sold.
Click to expand...

I really, really, really have to question Apple's choice of location here. Cramming them into central Tokyo is idiotic. At least space them out around Yamanote or something, but better yet, look beyond Tokyo...where MOST people who work and study in Tokyo live. Kanagawa would be great, as well as Saitama, which is the fastest growing area in Kanto and also houses the largest mall in Japan which is still growing (AEON Laketown). Given how insanely awful the outsourced AppleCare service is in Japan, those of us who want real Apple service will have to make the 90+min trek each way if we don't live in the centre of town. No wonder Apple has never made any headway in Japan in the laptop/desktop market and over 90% of iphones/ipads are sold through 3rd parties with dodgy service and sketchy add-on warranties.
Comment
You must log in or register to reply here.
Share:
Facebook Twitter Reddit Email Share Link
Register on MacRumors! This sidebar will go away, and you'll see fewer ads.
Sign Up
Top Bottom