Apple Maps has recently been updated with all-new traffic data in Bulgaria, Slovakia, and Slovenia, providing users with real-time updates about vehicular traffic in three more European countries. As usual, highly congested areas will display orange or red lines along the roads to indicate that drivers may face delays. The traffic feature is also now available in Gibraltar, a small British territory on Spain's south coast. 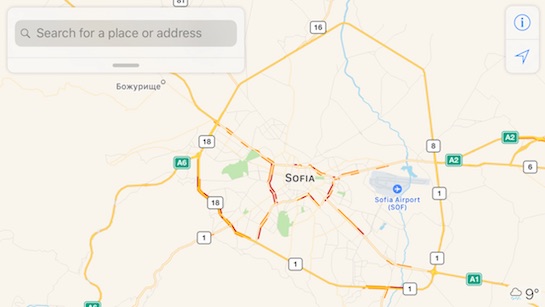 Only ever use Waze. Is Apple Maps any better?

They have to think outside US & UK, like India. If they want to be equivalent if not better than Google Maps.

Apple Maps is slowly and methodically closing the gap with Google Maps. I also still use Waze if traffic is bad. But Apple Maps is otherwise on par with google on LA.
Reactions: mijail, ignatius345 and Strutten

Melania is gonna be happy. Believe me.
Reactions: UKPoliticsGuy, Jaro65, sdz and 7 others
G

Bbqthis said:
Melania is gonna be happy. Believe me.
Click to expand...

Well its about time that Slovenia becomes part of the modern world in the eyes of big companies.

Its insulting that some modern companies still treat us like we still live in caves...

Well, some of our roads actually look like they're taking you to a cave

Apple Maps works as an "ok" general product in France and Switzerland if you do not have anything else to use. Otherwise, Waze works better for driving, Google Maps - for public transport info and maps.me for walks in the areas with patchy connection. Speaking of driving in particular, iOS 10 incarnation has "lost" quite a few useful guides along the route which were there in its iOS 9 variant. I will keep on checking on Maps once a month to see how it develops...
P

Apple maps are a (bad) joke. The street number where my house is supposed to be is half a kilometer away from the true location. That is after I reported this inaccuracy via the Maps.app at least 4 times spanning from at least two years ago till present day. Wondering if the reporting tool erases the reported issues right away ;-).

How can you be navigated reliably when the data has such flaws? You can't.
Last edited: Nov 10, 2016