Apple Maps now supports transit in New Zealand, enabling users to navigate with public transportation in most populated areas of the country. 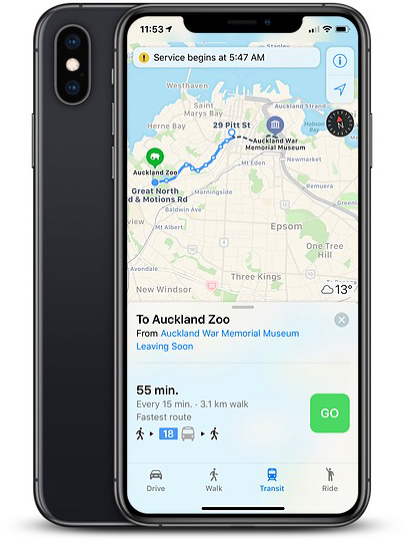 The feature can be accessed by selecting the Transport tab or button in Apple Maps on iPhone, iPad, Mac, or Apple Watch.

Apple Maps has supported transit since 2015, with an initial rollout in Baltimore, Berlin, Boston, Chicago, London, Los Angeles, Mexico City, New York, Philadelphia, San Francisco, Sydney, Toronto, and China. Since then, Apple has expanded the feature to many other regions around the world.

I have the feeling they are doing bigger areas at once now, or am I wrong?
Belgium soon though!

To the delight of many Kiwis
S

I just wish they would enable Siri on the Apple TV4, its enabled on every other device....
F

Junipr said:
To the delight of many Kiwis
Click to expand...

Now we need some public transport!

MacRumors said:
Since then, Apple has expanded the feature to dozens of additional cities around the world.
Click to expand...

Okay, sorry, updated it to regions

Mac-lover3 said:
I have the feeling they are doing bigger areas at once now, or am I wrong?
Belgium soon though!
Click to expand...

My money is on either Belgium and Switzerland.

flylcarusfly said:
My money is on either Belgium and Switzerland.
Click to expand...