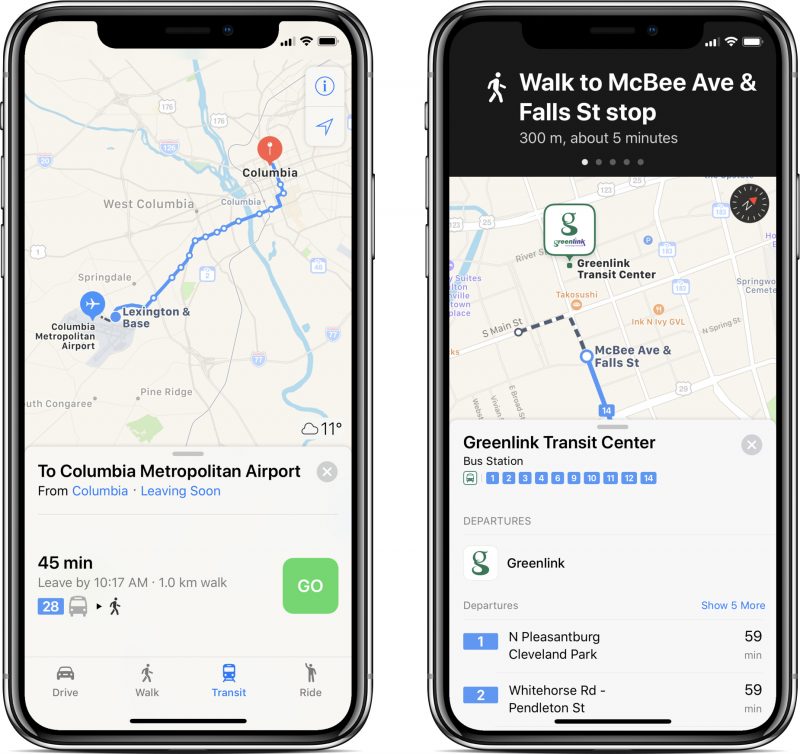 By selecting the Transit tab in Apple Maps on iPhone, iPad, or Mac, users can now access bus routes from The COMET in Columbia, CARTA in Charleston, and Greenlink Transit in Greenville. These local bus routes complement existing support for Amtrak train service in South Carolina added to Apple Maps in late 2016.

When the Apple Maps transit feature launched in 2015, it was limited to Baltimore, Berlin, Boston, Chicago, London, Los Angeles, Mexico City, New York, Philadelphia, San Francisco, Sydney, Toronto, and around 300 cities in China. Since then, Apple has expanded the feature to dozens of additional cities around the world.

Google Maps has also supported navigation via public transportation for several years now, including in Columbia, Charleston, and Greenville. One advantage of Apple Maps is that it lists departure times for bus routes in each city, whereas Google Maps doesn't have timetables available in every location.

As a South Carolina resident, THANK YOU. The Charleston bus system is a nightmare to those who don't live there.
Reactions: v0lume4 and jjm3

Looking for transit to Epic in Verona?

What's up my fellow South Carolinians!

TimUSCA said:
As a South Carolina resident, THANK YOU. The Charleston bus system is a nightmare to those who don't live there.
Click to expand...

TimUSCA said:
As a South Carolina resident, THANK YOU..
Click to expand...

You might change your mind about that after you use it for a while. This app is downright dangerous.
T

As usual, the blog post refers to Apple Maps transit as rolling out to "cities," when Apple's approach is to entire regions. Indeed there are over a thousand cities that have the feature. The other thing that the article glosses over is that the reason Apple is rolling them out slowly is that Apple is spending huge resources and time to customize each transit region for a great customer experience, such as timetables. People ask about this all the time as Apple could simply "turn on" all the cities/regions at once, as Google did by just importing the local transit companies data. Of course, Google got a lot of complaints about accuracy, usability, etc., so Apple has taken on a decidedly different approach. Here's a great article that explains what Apple is doing and why it's a decidedly better approach, even if it is taking longer.

now i see it said:
You might change your mind about that after you use it for a while. This app is downright dangerous.
Click to expand...

Right. If you use it with public transportation, there's a good chance your bus will explode.

now i see it said:
You might change your mind about that after you use it for a while. This app is downright dangerous.
Click to expand...

There's nothing wrong with Apple Maps in most places, and public transport is actually one of the places it shines. Don't be ridiculous.

TimUSCA said:
It's the CARTA, isn't it?
Click to expand...

Oh you're probably right. I was just stating -- I didn't know Charleston had a bus system. Ha! I suppose it was common sense but I'm out of the loop.

This is good news if you use public transportation but I know here in Greenville (I live here so I can vouch) he busses run so infrequently and require you to walk miles to get to a bus stop, it’s not reliable if you’d like to use them on a daily basis to get to and from work.

Once when I thought about using it, there was one stop in the morning, one in the evening at my closest stop. Miss the morning bus? You’re working from home. Miss the evening bus? Sleeping in the office, chief.

Also here there still exists a stigma that poor people are the only ones riding the bus. Except for the trolley downtown, you’re not going to find the Augusta Road-types on Greenlink anytime soon.
Last edited: Mar 1, 2018
You must log in or register to reply here.
Share:
Facebook Twitter Reddit Email Share Link
Register on MacRumors! This sidebar will go away, and you'll see fewer ads.
Sign Up
Top Bottom