Apple is reportedly holding discussions with United Kingdom-based British Telecom (BT) over a partnership that would make BT's mobile brand EE a "major distributor" of Apple TV devices. Specifically, the telecommunications brand would offer Apple TVs to EE customers, coming pre-loaded with apps that deliver pay-TV content like BT Sport and channels from other broadcasters (via The Telegraph). 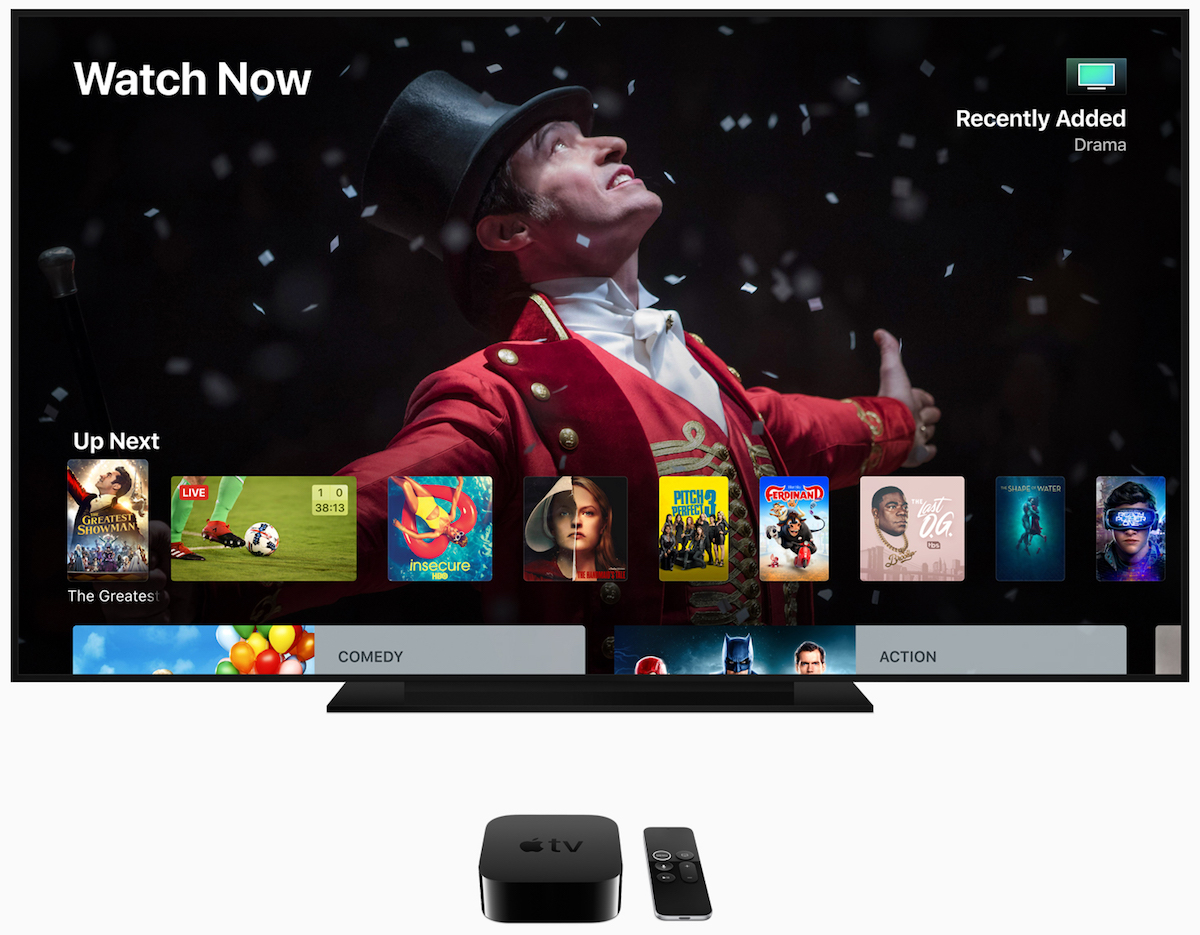 For Apple, the deal would get Apple TVs into the hands of more customers and increase the potential viewership for its upcoming slate of original TV programming, expected in 2019. While BT has invested in building its own set-top boxes to compete with Apple, Amazon, and Sky, BT consumer chief Marc Allera kicked off a new strategy earlier in May to begin "forging deeper partnerships with technology giants."

Apple's partnership with BT is said to be similar to the company's existing deal in Switzerland with telecoms operator and pay-TV provider Salt. Apple has also partnered with Verizon, which will offer customers an Apple TV 4K as part of its residential broadband package coming to four cities this year.

In regards to Apple's original programming, the first of Apple's television shows could debut as soon as March of 2019, potentially through a new video streaming service subscription. The company is also reportedly considering a single subscription bundle offering customers access to TV, Apple Music, and digital magazines (through its Texture acquisition).

Great. Wish US pay TV providers would do this. But they make too much money on their power sucking set top boxes.
Reactions: CarlJ, harriska2 and matthew12

I’m with BT for mobiles and internet so if I can get a free AppleTV 4K as part of my package then all the better!
Reactions: George Dawes and miniroll32
M

Currently on O2 who show no progress towards supporting either the Apple Watch cellular or the eSIMs, both of which are supported by EE. If this deal gives me more channels on ATV, especially those that aren’t on Sky (looking at you AMC) then I’ll definitely jump to EE.

The problem I'd have is most of the BT content we watch is stuff we've recorded (the BT coverage of motoGP is fantastic). However the dreadful BT YouView box often forgets to record, or is bad quality when playing back. The AppleTV box isn't going to allow recording of live content I assume?

How about a nice metallic sticker on the top of the unit, too? "BT Inside".
Reactions: vipergts2207, GubbyMan, Hastings101 and 2 others

EE is not a brand of BT!
Reactions: George Dawes

Pre-loading apps is one thing. Actually being able to watch the content is another. Unless you have BT as your ISP (no thanks), it costs about 35 quid a month for BT Sport.

Shame because to watch all the football legally you'll need Sky Sports and BT Sports and that costs over 100 a month total if you're looking for HD (notwithstanding any Sky discounts).
Reactions: nol2001

Pagemakers said:
EE is not a brand of BT!
Click to expand...

They kept the 'EE' name and branding for the cellular service, but integrated the core business operations into BT.
Reactions: orbital~debris, vmistery, zzu and 2 others

Pagemakers said:
EE is not a brand of BT!
Click to expand...

frou said:
How about a nice metallic sticker on the top of the unit, too? "BT Inside".
Click to expand...

Why stop with just the main unit? 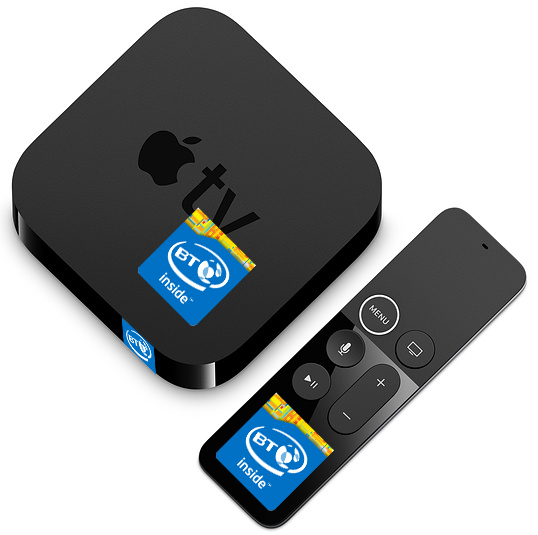 BMcCoy said:
It is, I'm afraid.

They kept the 'EE' name and branding for the cellular service, but integrated the core business operations into BT.
Click to expand...

Wow. Should have cecked my facts before posting.

Never knew that and I’ve been with EE for years!
Reactions: orbital~debris and zzu

How about dropping the price if you want to get it into more hands?
Reactions: zzu

Pagemakers said:
Wow. Should have cecked my facts before posting.

Never knew that and I’ve been with EE for years!
Click to expand...

It’s understandable that most people don’t realise this - especially as BT continues to push their “BT mobile” virtual mobile network.

SBlue1 said:
How about dropping the price if you want to get it into more hands?
Click to expand...

Because free is not a sustainable business model just like freemiums. Apple is a hardware company that offers services. It similar to how Mcdonald is believed to be a fast food restaurant company, but they are really a real estate company. They own every store including all franchises and lease the property to the franchisees. Apple hardware represents their true value and maintains their success. Software and services come and go quickly, but the need for a device to run it on remains.
A

A dreadful firm to do business with.

BT are notorious for not adhering to their contracts with customers and hiking prices up mid term.
Reactions: zzu and nol2001
A

AshleyHredone said:
A dreadful firm to do business with.

BT are notorious for not adhering to their contracts with customers and hiking prices up mid term.
Click to expand...

One thing for absolutely sure, once BT get their grubby hands on it, they’re sure to make the experience piss poor and rip their customers off as far as they can. EE was pretty good before theY were bought out by BT, then all of a sudden tiered speed caps came in and they all but ditched the SIMO plans making them so unattractive to force their longer contracts upon us. Awful company.
Last edited: Oct 8, 2018
N

For me, if this was done well I think it would be excellent. Apple need to do more in the TV space. UK market is competitive.
Last edited: Oct 8, 2018
B

Someone will defend Timmy for taking us back to the 90’s with bundled ‘carrier content’.

MBA crew literally cannot see out of their textbooks.

People are getting all worked up over Apple pre-loading apps, in the manner that, say, companies selling PCs preload the apps of "partner's" (read, "companies giving them piles of cash") into the Windows image on the PC. But I don't think that's what is being presented here. This doesn't sound like Apple stuffing EE's apps onto the Apple TV you or I might buy in the Apple store, it sounds like Apple providing EE/BT with special Apple TVs (that EE/BT will then provide to their customers) that have these apps preloaded:


MacRumors said:
Specifically, the telecommunications brand would offer Apple TVs to EE customers, coming pre-loaded with apps that deliver pay-TV content like BT Sport and channels from other broadcasters....
Click to expand...

I don't see any problem with this - you buy an Apple TV in an Apple store (or some other normal consumer-facing store), and you get... an Apple TV. With no "third party bundled junk" cluttering it up.

But, if you contract to get TV service from some cable TV company, who "gives" you an Apple TV as part of the deal, it not only makes sense that it would come with an app from said cable TV company pre-loaded (not replacing any of the default apps, just there on the home screen), it might help a lot of less tech-savvy customers use the Apple TV in lieu of a cable box (remember, most of their customers are not readers of Apple tech news websites). Think of it this way: for the last however many decades, if you order cable TV service, the cable company hands you a box which has software on it to let you watch their TV service - only, it used to be a proprietary "cable box", now it's an Apple TV. Which can do all the other Apple TV things, as well as watching said cable company's programming.

Now, if Apple said, "some cable company is giving us money, so we're going to put their cable TV app on every Apple TV we sell", then, yes, I'd find that annoying - with that rising to infuriating if the app couldn't be removed (and well beyond infuriating if the app couldn't be hidden, or if it got in the way of using the Apple TV for other purposes). But I don't think that's what we're seeing here.
Last edited: Oct 8, 2018
Reactions: orbital~debris and zzu