Back in June, Swedish retail news site Market.se reported that Apple was making plans to open its first retail stores in Sweden, with Stockholm understandably being the company's first target city.

As noted by Allt om Mac [Google translation], Apple is now moving closer to opening its first Swedish stores with its registration of a new business by the name of "Apple Retail Sweden AB" to oversee the operation. 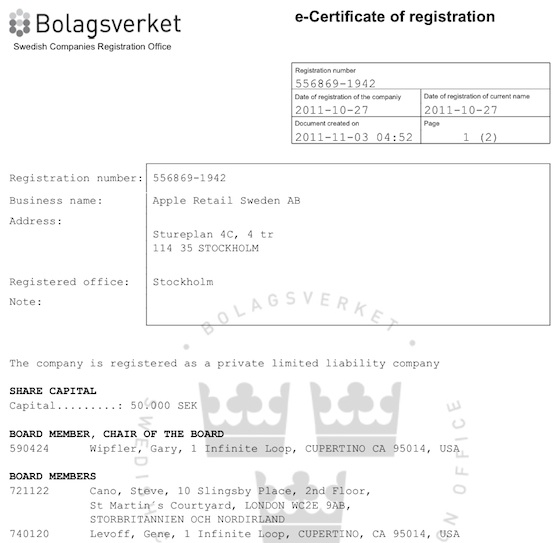 According to the business registration certificate on file with Swedish officials, the new company was registered on October 27th and names Apple treasurer Gary Wipfler as chair of the board. Two other Apple employees are also named as board members: company attorney Gene Levoff and senior director of international retail Steve Cano. Cano had been rumored just today to have succeeded Ron Johnson as Apple's senior vice president of retail, but the company issued a statement indicating that the search for Johnson's replacement is still ongoing.

Apple currently operates retail stores in eleven countries, but is making a significant push with its new international locations. The company has stated that it plans to open 40 new stores during fiscal 2012, with 75% of them being outside of the United States.

In addition to Sweden, Apple has also been working hard on a store in Amsterdam, which would be the company's first location in the Netherlands. That store was originally intended to open earlier this year, with Apple even having posted an entire retail jobs page on its Dutch site, but delays apparently related to disputes over historic preservation of the building have reportedly pushed that opening back to at least early 2012.

I myself live in Stockholm and just the other day was thinking I wonder if apple would open a store here. While I am sure there is a market for such, my biggest question would be where could they house such a place as usually apple stores are very prolific in their location and styling. And without trying to sound nasty, but I can't imagine any location in central Stockholm that would be right for them due to size and architecture.

Eventually I settled on the thought that if they did open up a retail establishment I believe it would be located across the street from the large department store "NK".

Either way, based on architecture in Stockholm, it's going to be very hard for them to open a store with such identity as say convent garden London.

home is where my heart is

After they've opened in Sweden, it won't be long til they'll open in Norway!!! (it's sorely missed here)

Sounds great with Apple entering the Scandinavian retail market.
But surely hope for an opening in Copenhagen as well in the near future!
B

I hope they do Oslo aswell.

Should I congratulate Sweden already for this? It looks like a done deal already.

FLIPPIN 'ECK! I can't wait! This will be so amazing. I hope they find a real good spot for it.
J

Great! I hope their 40 store expansion next year includes some in Denmark and Norway.
J

Hoping for Denmark too

Great to see that they will finally enter the Scandinavian retail market. It would be great to have Apple Stores in Denmark too, but with the current hostile anti-corporation government, I wouldn't blame Apple for avoiding us.
J

jenss said:
It would be great to have Apple Stores in Denmark too, but with the current hostile anti-corporation government, I wouldn't blame Apple for avoiding us.
Click to expand...

About time! I hope they open stores in Göteborg and Malmö/Lund as well.
B

This is great news. The Apple Resellers in Stockholm are terrible... They think they are Apple Stores yet have no idea what service is. I guess they will have to close up now though, because who would buy from them if there is an Apple Store nearby...

Great news!
I sure hope this means Apple will open at least one Retail Store in Norway as well, Oslo in specific. We have a few Apple Premium Resellers around here, but they are all terrible. I welcome Apple with open arms.
You must log in or register to reply here.
Share:
Facebook Twitter Reddit Email Share Link
Register on MacRumors! This sidebar will go away, and you'll see fewer ads.
Sign Up
Top Bottom