Apple has rolled out a small but notable update to the Radio tab in Apple Music, removing the static Beats 1 logo at the top of the landing page and replacing it with a new UI that dynamically updates to the currently-airing live radio show (via 9to5Mac). In addition to the title, the tab will update with new artwork and the airing location of the show.

The change also brings more direct UI cues for users to navigate through the Radio tab, with a "Listen Now" button under the currently airing show and the less-hidden option to "Explore Beats 1." 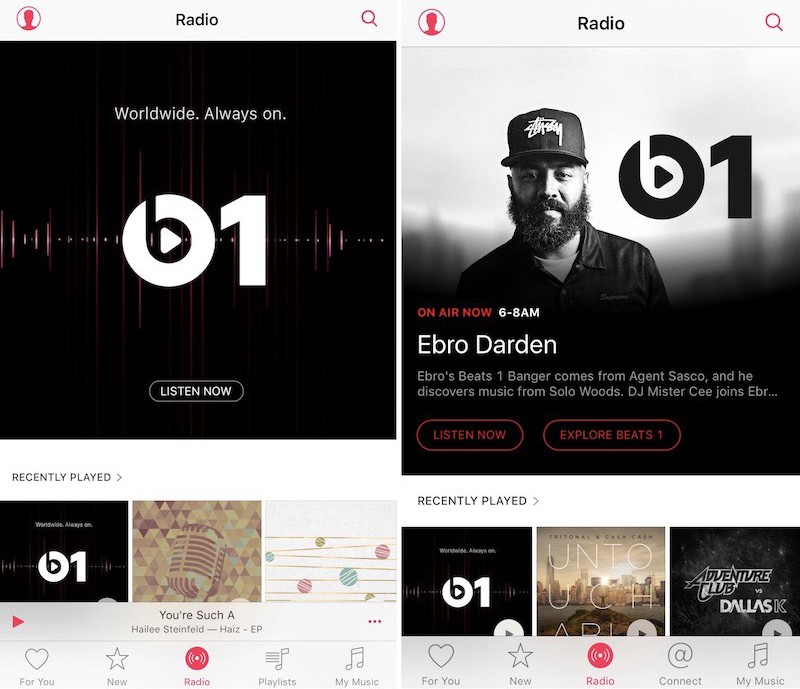 The Radio tab before (left) and after the update (right)​

Before the update, the Radio tab had a simple, unchanging Beats 1 logo with a "Listen Now" button that users could tap to jump directly into whatever was airing at the moment without exactly knowing what that would be.

The app also gave users the opportunity to explore more information by delving into a secondary menu that listed live shows and upcoming hosts and interviews on Apple's radio channel. Some might not have even known about the auxiliary menu, since there was no UI hint to its existence - tapping anywhere on the Beats 1 logo launched it. Now "Explore Beats 1" should help guide more users to the scheduling menu.

Anyone on iOS 9.2.1 -- or the beta iOS 9.3 seed -- should see the Beats 1 update, but a quick multitasking-enabled close of Apple Music will help it show up if you aren't seeing it. As of writing, no similar update was seen on the Mac version of Apple Music.

Makes more sense but doesn't seem to be available in the U.K at the moment.

It is showing in Mexico. Best part of Apple Music IMO.
A

Why did this take a year for them to implement? Come on guys...

CaTOAGU said:
Makes more sense but doesn't seem to be available in the U.K at the moment.
Click to expand...

I'm in the UK and it's showing in my Music app on my iPhone but oddly it wasn't on my iPad Pro.

But it occurred to me that I'd just done a hard reboot on the iPhone because of the stupid Game Center bug. So did the same on the iPad and it's showing there now too.

I know, I know, it's just a small iterative improvement. But still, seems like there are much more pressing real problems with the Apple Music service and the iOS Music app in particular.
Reactions: jonnyb098 and Howard Ellacott
J

So what's more pressing? Honestly asking. My UX wishlist has been completely fixed in 9.3.

Jakexb said:
So what's more pressing? Honestly asking. My UX wishlist has been completely fixed in 9.3.
Click to expand...

Yeah I kind of wonder that too. I like/am used to it now. I can do everything I need to on any iOS device or in iTunes on my Mac.

I'm sure there's probably things that could make the experience better that I've not considered because I'm settled into it now, so I'd like to hear some ideas.
W

Why does beats 1 need to be front and center? Apple mocks pandora-like radio stations saying they're 'not real radio' but stale algorithmic playlists. But its what a lot of people like. The pandora-like stations seem crippled in that there is no way to fine tune them by artist vs discovery, and that they are only sorted by recently played. I just don't understand the hype for one more radio station that happens to be apple based, with the same tired DJ interruptions, etc. Just wish I could hide it

MacRumors said:
a quick multitasking-enabled close of Apple Music will help it show up.
Click to expand...

But did Craig Federighi say this would work?

Nice improvement. I wish Beats 1 was better. When I listened to it, I didn't like most of the music.
Reactions: tyasjs

OK cool, listen to BEATS 1 on an occasion. Why cant I airplay the shows to my Apple TV? IS this just me or....
B

Now they need to COMPLETELY REMOVE the other stations since we can't use them if we aren't subscribed to Apple Music. Just dedicate the entire tab to Apple Music for non-subscribers.
You must log in or register to reply here.
Share:
Facebook Twitter Reddit Email Share Link
Register on MacRumors! This sidebar will go away, and you'll see fewer ads.
Sign Up
Top Bottom