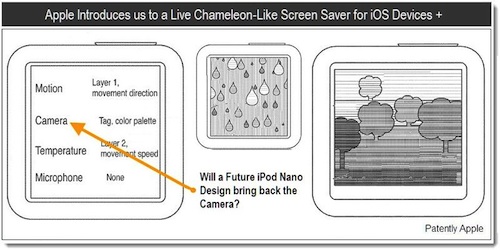 Patently Apple reports on an interesting new patent application from Apple describing the use of environmental sensors to generate screen saver content for mobile devices such as the iPod nano. As an example, the device could sense such environmental characteristics as motion, sound, temperature, or even camera input, using that information to provide the users with screen saver content relevant to the setting. 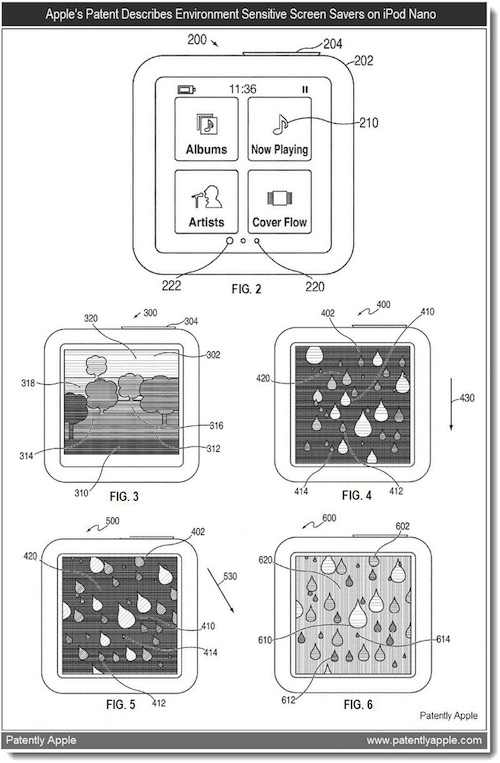 Apple's figures for the patent application show a device that appears nearly identical to the current iPod nano, a square device with a touch screen displaying up to four icons on a home screen. With the text and images included in the patent application also addressing the possibility of using images taken by an onboard camera to inform screen saver activity, it offers additional evidence that Apple is considering adding a camera to the diminutive iPod nano.

Interestingly, Apple's patent application was filed in November 2009, nearly a year before the sixth-generation iPod nano debuted with the form factor depicted in the drawings.

So essentially this says that if it's raining outside... I can look at my iPod instead of out the window??
Comment

Yawn.... Another patent that won't be implemented...

Does the Nano really need a camera? Why not put one on the shuffle and classic then? Like size matters..

I wish some video games would do this (Pokemon for example)
Most people wouldn't like it, but I like the idea of it.
This kinda reminds me of WeatherIcon though.
Comment

The rotating wallpaper doesn't look that interesting, but I wouldn't mind a camera back on the Nano.

As long as they could still somehow keep the clip as well because that is one of the main reasons I bought a shuffle.
Comment

The current Nano is a mess for that price. Adding a camera would at least be something of greater worth...like a step back to 2009.
Comment

My Android phone does this already. It's part of SenseUI.
Comment

Wow. It'll be cool to see that in the new nano. But probably years away.
Comment

Seriously, who the hell needs a screensaver on an iPod?
Comment


nicky89 said:
Seriously, who the hell needs a screensaver on an iPod?
Click to expand...

Speaking of Apple Patents, it looks like Apple has lost its case against Kodak:

That will surely shorten the battery life...
Comment
D

I have the nano before the current gen with the camera, and I have never used it once in 1.5 years.

I really don't understand why it's there, I just don't see the point of it.

What I would like to see is making the nano bigger so you are able to watch videos on it again. I have used my nano on many occasions to watch films on - yea it isn't a massive screen but it's just about big enough to be able to still enjoy watching stuff on it. I was really disappointed when they made the screen smaller.
Comment
T

My first thought... great, something to make the battery even less long lasting.

I love my 6th gen nano but the battery already is disappointing. I don't think it could support these features and not be sucked any quicker. Basically if you are just using basic function for the nano the battery lasts a long time, but it seems the more you ask out of it,it exponentially gets drained quicker. Some reason just being connected to my motorcycle helmet's speakers make that "24 hour" battery last more like 2 hours. And my 3rd gen Nano was able to go a whole weekend trip of riding without being charged on those same speakers. I think the only reason the battery on the 6th gen is 24 hour is that the ipod sips energy long as you don't have anything it is connected to take any power.

Add a camera and some sort of screensaver where it stays on? Specially fi the camera makes the battery even smaller? Yeah... good luck with battery life on that.
Comment

I'll just wait till Steve shows me what it can do.
Comment

I'm surprised people still care about the nano so much.
Comment

Apple as all other companies thinks ahead about stuff... So it is possible that a future iPod nano gets camera and something like this for screen saver.
Comment

vincenz said:
I'm surprised people still care about the nano so much.
Click to expand...

There is a mic too, so it was a video camera for all of you that care.
Comment
P

I just want the next nano to have stereo bluetooth. I'd think about doing one of those watch things, that way.
Comment

The current Nano is a mess for that price. Adding a camera would at least be something of greater worth...like a step back to 2009.
Click to expand...

+1
Apple really dicked up the nano, that's for sure.
Comment
T