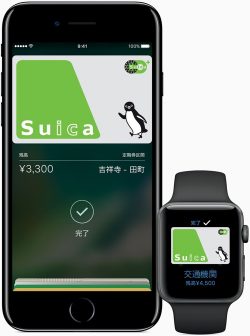 Apple Pay is expanding to three new countries this fall, including New Zealand, Russia, and Japan. Apple today confirmed its plans to bring Apple Pay to Japan on stage at its iPhone 7 event, while the Russia and New Zealand Apple Pay sites were updated with info on an imminent launch.

As was previously reported, Apple Pay in Japan will be implemented through a partnership with Sony and an iPhone 7 with support for the FeliCa tap-to-pay format, which has been widely adopted in the country. Apple Pay, which will work with Suica, will be coming to Japan in October.

Apple Pay is accepted anywhere Suica is available, so users can make quick everyday purchases and buy or reload a Suica card or commuter pass, all with their iPhone. Japan's major financial brands will also support Apple Pay, so shoppers can make purchases in many of the country's largest stores, at neighborhood shops and restaurants, and from their favorite online merchants.
Click to expand...

Apple Pay will be coming to New Zealand through a partnership with ANZ, and it will initially be limited to ANZ customers. A launch date has not been announced but it is expected to be released in October.

"Our customers in the nine markets around the world where Apple Pay is live today love how convenient it makes their day-to-day shopping, and we can't wait to bring Apple Pay to New Zealand so customers there can start making easy, secure and private payments in their favourite stores, apps and on the web," said Jennifer Bailey, vice president of Apple Pay, in a statement.
Click to expand...

Details on Apple Pay in Russia are limited with no word on which banks it will work with, but the service is expected to debut before the end of the year.

Brilliant. Time to open an ANZ account and gradually transfer from all the other banks...
Reactions: mackiwilad
I

Going to be complex observing the payment card sanctions regime in Russia as it depends on both card issuer and processing bank. And then, theres the whole issue of being required to store the data on RF servers
Reactions: Sandstorm
M

So excited! Finally we get ApplePay in NZ!
Contactless terminals are fairly widespread here so it shouldn't be hard to start using it.
Reactions: gp101, igazza, mwb and 1 other person
T

Pretty much zero, yes. I haven't seen Amex used seriously since the 1980s either here or in the UK. Everyone uses EFTPOS for almost all transactions of all values, although tap and go (contactless) is gaining traction and I'd say is available at probably half the retail locations in NZ. Many people (myself included) haven't used cash for a decade or more.
Reactions: mackiwilad

tillsbury said:
Everyone uses EFTPOS for almost all transactions of all values, although tap and go (contactless) is gaining traction and I'd say is available at probably half the retail locations in NZ.
Click to expand...

There was talk of contactless EFTPOS a year or so ago. I wonder whether it'll ever come to fruition; I believe that it's cheaper for the retailer so we might see an increase in contactless terminals if it goes ahead.


tillsbury said:
Many people (myself included) haven't used cash for a decade or more.
Click to expand...

I still carry cash in case of emergency. Coincidentally the terminal was down when I was buying lunch today!
O

Too bad only the Japanese version will have the Felicia chip. Would've been nice to use this feature when I travel there.
Reactions: Sandstorm

Why not EUROPE?????
Reactions: Sandstorm

I've had no luck using ApplePay in NZ to date. I've got UK bank account and cards.
Seems to be an issue not with the check out hardware & systems but the payment authorisation isn't accepting it just yet.
Shame...

I couldn't add my UK credit cards to my iPhone until I was physically back in the UK earlier this year.
Apparently your phone's location is used to ring fence card entry as an extra level of security.
It'll be interesting to see if that paranoia prevents me from having bank cards from multiple countries in my device(s) too when the NZ banks join the party and I try adding my NZ CC's too.

Good timing for the NZ tourist industry, just in time for summer, as I found using Apple Pay when travelling it is very useful to have at hand.

tillsbury said:
I haven't seen Amex used seriously since the 1980s either here or in the UK.
Click to expand...

I use my AmEx all the time in the UK. I prefer to use it to my Visa due to air miles. It's not as widely accepted. Most major locations accept it though - supermarkets, petrol stations, train and airline tickets, Amazon etc. Usually it's independent retailers who don't.
T

offshoreyachty said:
Going to be complex observing the payment card sanctions regime in Russia as it depends on both card issuer and processing bank. And then, theres the whole issue of being required to store the data on RF servers
Click to expand...