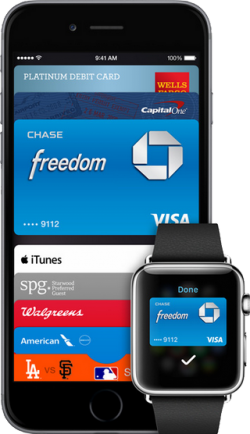 The newly added Apple Pay participating issuers are reflected below, although it's worth noting that some banks, credit unions and financial institutions listed may have already had support for the contactless payments service and are only now being reflected on Apple's website.

On the merchant side, Cinnabon, Chili's, Domino's, KFC and Starbucks will support Apple Pay in the U.S. starting in 2016.

I long for the day when I see RBC, TD Canada Trust, CIBC, BMO, Scotia Bank, etc on that list.

In the mean time, I'm enjoying Apple Pay with my Amex at more stores than I thought possible.
Reactions: rtms77, Corrode and mxmgodin
Comment

If we could talk these banks into selling groceries I could use Apple Pay more often.
Reactions: HansumKingtut and seventhedition
Comment
L

Enough with the issuers. Just use a credit card.

Apple should be worried about getting more stores to accept it.
Reactions: IHelpId10t5, BigHonkingDeal, HansumKingtut and 2 others
Comment
M

mnsportsgeek said:
This is getting ridiculous.
Click to expand...

levitynyc said:
Apple should be worried about getting more stores to accept it.
Click to expand...

IMO, one way Apple can get more stores interested in accepting it is by building up the number of cards enrolled in Apple Pay (which requires getting more issuers on-board).
Reactions: HansumKingtut
Comment
A

mnsportsgeek said:
This is getting ridiculous.
Click to expand...

My sentiments exactly. It's not even a small town bank. What the hell is taking them so long to wake up?
Comment
M

Amadeo said:
My sentiments exactly. It's not even a small town bank. What the hell is taking them so long to wake up?
Click to expand...

If they weren't my secondary bank, I'd be more frustrated but I know a lot of people use them as their main bank. Not sure why they don't want to implement it.
Comment
M

Amadeo said:
My sentiments exactly. It's not even a small town bank. What the hell is taking them so long to wake up?
Click to expand...

Funny that you say that - a lot of "small town banks" are actually jumping onto the Apple Pay bandwagon quicker than a lot of the big banks. My bank, a regional bank with about 15 branches, adopted Apple Pay within 6 months of launch.
Comment
S

I have five cards in my wallet. After today's update, I now have four of them in Apple Pay. The only one that isn't yet... Ally.
Comment

People in other countries must think American's are mentally slow (and yes, I'm American).

We then sit there and swipe the card without thinking, "gee why are we still doing this when every other country uses chip technology everywhere?"

Speaking of Apple Pay, where are the additional merchants? The transfer from swipe to chip & contact-less shouldn't move at such a snail's pace.
Comment

xero9 said:
I long for the day when I see RBC, TD Canada Trust, CIBC, BMO, Scotia Bank, etc on that list.

In the mean time, I'm enjoying Apple Pay with my Amex at more stores than I thought possible.
Click to expand...

I just got my AMEX in the mail and added to my iPhone and Apple Watch.

How do you tell the cashier that you want to pay? Do you say: Credit Card? American Express? ApplePay?

I'm in Toronto and I've been asking different stores where I shop and a good majority of them do say they accept AMEX. Have you encountered many places where American Express is accepted but not via tap?
Comment

xero9 said:
I long for the day when I see RBC, TD Canada Trust, CIBC, BMO, Scotia Bank, etc on that list.

In the mean time, I'm enjoying Apple Pay with my Amex at more stores than I thought possible.
Click to expand...

Great, no mention of any Dutch banks, like ING, ABN Amro, Rabobank, Aegon. I guess the Netherlands are no priority at all given the tiny number of 17 million hungry consumers.
Comment
C

Same thoughts here. It's been weeks since I've last used it. How about focus on more stores/more places. And you must get the big players like Target and Walmart in the loop.
What's funny is that Samsung pay actually works almost everywhere but only a small number of banks are supported. Complete opposite of what's going on with Apple.
Comment

There is already enough support among banks/CUs. What we need are more retailers to accept

Pay.
At the least I should be able to buy my groceries with my phone.
Unfortunately I think Publix is part of that CurrentC crap or whatever it's called.
Comment
S

Thanks for nothing, Canada. (Everywhere I go doesn't seem to take Amex)
Comment

Is that... Glass City Federal Credit Union I see on the list?

"On the merchant side, Cinnabon, Chili's, Domino's, KFC and Starbucks will support Apple Pay in the U.S. starting in 2016."

Ugh. Here in the U.S. adding merchants is the key and 5 food vendors isn't what we need (although any additions are good...). Many of the merchants that turned off NFC payments after Apple Pay rolled out here still haven't turned them back on.

I should add that Jewel Osco (big grocer / pharmacy in the Chicago area) did add ApplePay and I didn't realize it till I just searched...their pinpads don't say anything about NFC and I missed it...will be using that going forward. I'm really down to the big retailers who are holdouts (Target, Walmart, Home Depot etc. and Meijer which does support it is a great alternative to Target that I have access to).

Frankly the whole experience of using Chip cards and the time the user goes through as you wait for them to process and then remove them is a wonderful opportunity (TV commercial opportunity doesn't get any better) for Apple Pay which is basically instant.
Last edited: Dec 3, 2015
Comment

I tried ApplePay at a restaurant that accepts both AMEX and tap. "Card not recognized". Darn.
Nonetheless, my dinner companion and the waitress were impressed that the device recognized my iPhone at all.

EDIT: I went to Shoppers Drugmart that has for weeks said they support both AMEX and tap payments and it didn't work. I'm starting to lose faith in ApplePay via AMEX — at least in the short term. They need to really start rolling out compatible retailers. Getting Shoppers on board would be a huge boost to ApplePay since it's one of the top retailers in the country. Some people on here have said that they've gotten ApplePay accepted there. I went to a fairly new store that should have the latest terminals and it didn't work. In fact, when I asked to pay with American Express, the terminal said Swipe/Insert card. No tap.

EDIT 2: I called AMEX and they said that it's likely that the terminal isn't set up to accept American Express tap. They said that they're making a big push to get *all* AMEX accepting retailers compatible with tap. Moneris is also updating their terminals to accept ApplePay so the rollout should be pretty quick. They also said that there has been a spike in retailers wanting to sign up for American Express because of customer inquiries. So keep asking to pay with Apple Pay/American Express and retailers will see the demand to join.
Last edited: Dec 3, 2015
Comment

ipedro said:
They said that they're making a big push to get *all* AMEX accepting retailers compatible with tap.
Click to expand...

Some of these retailers are either lazy or just won't take the time to set up their terminals correctly. I think the only way that the financial institutions are going to be able to force this is to remove the mag strip from the cards. I believe that I read something somewhere that said that starting in 2016, all merchants were supposed to have the new terminals, and they are supposed to be set up for tap/nfc.

The financial institutions have spent a lot of money over the last year reissuing cards with the chip tech., to help prevent fraud, and I don't think that they are gonna let some of these lazy retailers get by with this much longer.
Comment

Some cards here in Canada already come without a mag strip. Chip and PIN has been mandatory for quite some time.

So far, I've only been able to use ApplePay at stores that American Express and Apple has listed as compatible. However, some people have said that ApplePay has worked at Shoppers Drugmart. It didn't work for me. When they selected AMEX, the terminal didn't even allow tap. It said insert or swipe card.