Apple today posted a limited-time promotion on its Japanese site for its "New Life" campaign, which allows customers using certain company-issued credit cards to receive cashback and other benefits on Apple Pay purchases and store rewards.

As noted by Japanese blog Ata Distance, the Apple Pay promotion runs between March 1 and April 30 and takes in app purchases and online services including Japan Taxi, Toho Cinemas, Demae-Can, Jalan, Minne, Base, and Giftee. The available online rewards range from coupons to free shipping on orders, while purchases from brick-and-mortar convenience stores are also touting similar benefits. 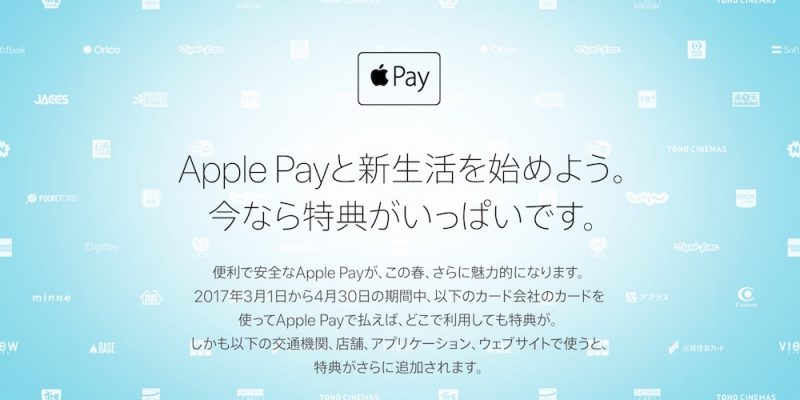 As part of its "New Life" campaign, Apple has added more firms to its list of participating card issuers: APLUS, EPOS, JACCS, Cedyna, POCKETCARD and Life all now offer some sort of reward as part of the promotion. UCS integration has also been confirmed but a timeline for activation has not been announced.

ONLY FOR IPHONE 7 AND WATCH SERIES 2
W

For those that may be interested, 'new life' refers to the fact that the school year (and university) starts in April.
Also many companies take in new batches of workers and newly transferred employees too.

It is quite a big shopping season as people prepare for their 'new life'.. Probably a good way to cash in on the spending uptick. Hopefully it will help Apple Pay gain traction and drag the banking system out of the dark ages. (Still a work very much in progress.)
L

allenvanhellen said:
ONLY FOR IPHONE 7 AND WATCH SERIES 2
Click to expand...

Next issue in that config would be that most card read in transportation are right side; my watch classical left. I need to try wearing the watch on the right arm

ChristianJapan said:
How about iPhone 6s and watch 2 ?
Click to expand...

Yes, you can use older iPhone models with watch 2 for FeliCa. Details here: https://atadistance.net/2016/10/24/apple-pay-japan-intro-qa/

KanjoBB said:
Yes, you can use older iPhone models with watch 2 for FeliCa. Details here: https://atadistance.net/2016/10/24/apple-pay-japan-intro-qa/
Click to expand...