Apple today shared a new promotion that will allow Apple Pay users to get two free bike rides through the ofo app from now until June 20.

Ofo is a smart bike sharing service that's designed to let users pick up and use a bike for short trips around various cities where ofo bikes are available. 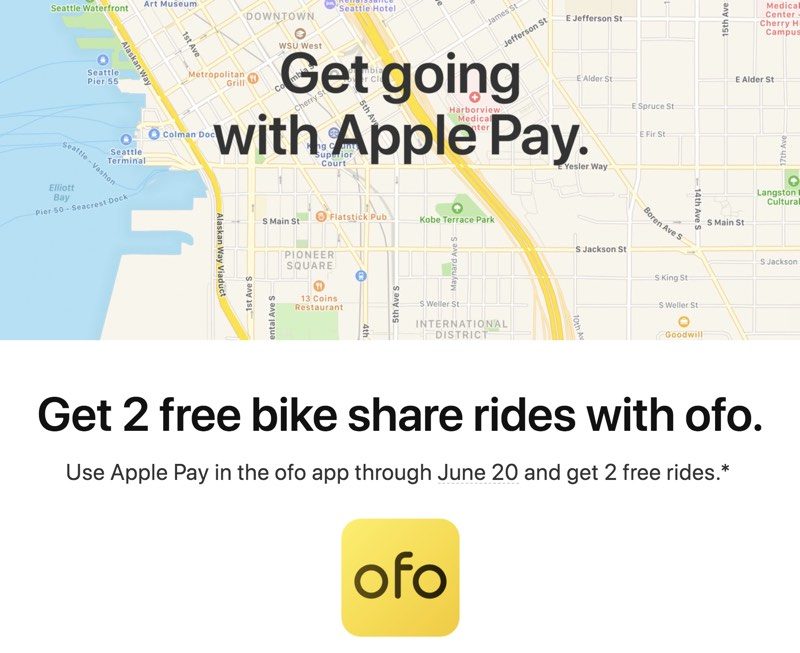 The ofo service operates in multiple countries around the world, including the US, the UK, Australia, China, Japan, Malaysia, Russia, Thailand, Singapore, Spain, Italy, Portugal, the Netherlands, Czech Republic, Israel, Austria, and Kazakhstan. The Apple Pay deal is, however, limited to the United States.

Ofo normally charges users $1 per hour to borrow an ofo bike, with Apple Pay providing two $2 off coupons that are good for two two-hour rides with the promo code "Apple18." Each coupon is available for seven days after the promo code is used and will be applied to the next two rides when available.

Apple Pay must be selected as a default payment method before the code is applied, and riders who download the app and get a free trial should wait to apply the code after the trial ends.

Again, how does one get these emails?
(Yes, I've already turned on the email options in Settings.)

That’s good, my city just got Ofo a couple weeks ago.

Awesome! I do use the transit apps already and love it.

I'd go for a promo that would make Ofo promise to remove two of their bikes from the sidewalks.


"Sad, Ofo pulled out of Boston suburbs last winter..."​
While I don't wish for them to pull out of San Diego, I do wish them to remove the gross excess of bikes that they (and the other companies) have deployed.

My back-of-envelope calculation is that on a busy Saturday or Sunday, with nice weather, or whatever peak day/time is, no more than 10% of the bikes are actually in use. That is, you will see 10 bikes laying out around on the sidewalks for every one being ridden.

Oh, there are plenty being ridden. But there are WAY too many on the sidewalks.

The companies are in an all-out war. And, like Uber, they don't comply with law or licensing until forced to. Most cities were not prepared, and did not have any licensing requirements in place.

$20,000/yr fee for each company.
$130 per scooter/bike deployed (one-time)
$60 impound fee if the city has to collect them
Must improve user education efforts

The homeless are making some inroads into reducing the quantity of bikes, but they aren't doing a good enough job. They desperately need better tools to defeat the locks. (Except for Ofo, which are easy to defeat, and the homeless bike of choice.) One good thing, is that the rental bikes have distracted the homeless from stealing bikes owned by individuals.

Before you yell at me - I think the homeless should be given free credits to use the bikes and scooters. That should be one more licensing requirement. And, yes - they almost all have smart phones. The state of California supplies them through a program administered through several third parties. And I do support that program.
You must log in or register to reply here.
Share:
Facebook Twitter Reddit Email Share Link
Register on MacRumors! This sidebar will go away, and you'll see fewer ads.
Sign Up
Top Bottom