MarketWatch reports that Chinese regulators have cleared for sale a new 3G-capable wireless device from Apple, with the A1430 model number specified in the agency's database indicating that it is the cellular-capable model of the new third-generation iPad.

According to China's Telecommunication Equipment Certification Center, an Apple device with third-generation, high-speed wireless data capabilities has been issued the license needed for the company to begin sales in China.

The device, listed as "model number A1430" is compatible with the 3G standard wide band code division multiple access, or WCDMA. The language used by the regulator suggests the device is the new iPad, which has yet to launch in China. Vendors often begin selling new devices within weeks of network access licenses being granted.
Click to expand...

Apple previously obtained certification on the Wi-Fi model of the new iPad, and with the 3G model now receiving the required network access license, Apple may move quickly to launch the device in its second largest market after the United States. 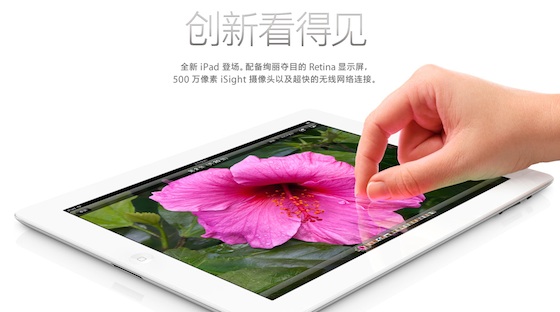 The new iPad is already available in roughly 90 countries around the world, with the company adding the Philippines and Guam just yesterday. Based on information on Apple's site, it appears that the company has also quietly added Honduras and Paraguay to the list of markets for the new iPad over the past few days.

Nicaragua is currently the only Latin American country with official iPad distribution that has yet to begin offering the latest generation of models, but we understand that Apple has just received the necessary certifications there and distributors should begin sales of the new iPad in the near future.

Now I can sleep tonight

i'm sure there will be lots of happy people over there. (not sleeping and playing on their new iPads )

do the Chinese have a MacRumours Equivalent?

This is good news. I hope ProView does not have any means of standing in their way. iPad sales in China during the month of June would be a big boost for this quarter's earnings and AAPL stock.
M

Guess it's time to sell my other kidney, too, now.

Actually, it is remarkable how long the Chinese regulatory agency needed to deem the 3G/4G version safe. I'm pretty sure, otherwise it would be on sale already for a long time. Just assuming that they got the New iPad 4G before the FCC since it was already in China
T

charlieegan3 said:
do the Chinese have a MacRumours Equivalent?
Click to expand...

Probably MacLumols, but you may want to check that
C

Its correct, Honduras got the new iPad on saturday may 26.
It is officially distribuited by apple authorized resellers

So, what will next years iPad have to make it special ?

Mr. Gates said:
So, what will next years iPad have to make it special ?
Click to expand...

when it launch in indonesia?
WE WERE BORN THISSS WAY.. INDONESSIAAA....
M

I wonder whether the ProView battle has been quietly sorted out behind the scenes?.......Sounds like something has changed in that arena.
J

ricoism said:
when it launch in indonesia?
WE WERE BORN THISSS WAY.. INDONESSIAAA....
Click to expand...

Sadly still not yet, blame it on the slow Indonesian Government services, retarded corrupted fools, and believe me I know, I live there now and have been about 70% of the last 12 years.


Mac Kiwi said:
I wonder whether the ProView battle has been quietly sorted out behind the scenes?.......Sounds like something has changed in that arena.
Click to expand...

Exactly, they must have solved the problem.
A

I thought that the new Ipad is everywhere already

Come on!!! I'm fed up of being tempted by the scalpers in CyberMart!
Z

charlieegan3 said:
do the Chinese have a MacRumours Equivalent?
Click to expand...