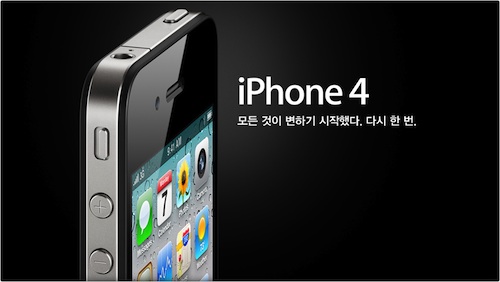 Bloomberg reports that Apple has finally received approval from government regulators in South Korea to begin selling the iPhone 4. According to a spokesman for Apple's carrier partner KT, the company plans to launch the device in that country sometime in September.

The regulator said it granted a certification after reviewing documents submitted by Apple, including the results of tests conducted locally. Apple filed an application on July 29, the watchdog said.
Click to expand...

South Korea had been initially included in the second batch of countries to see iPhone 4 releases that took place on July 30th. At the iPhone 4 press conference to address antenna performance issues earlier in the month, however, Apple CEO Steve Jobs announced that the initial list of 18 countries had been pared to 17, noting that the South Korean launch would be somewhat delayed as the company continued to seek government approval. Apple's carrier partner KT and government regulators disputed Apple's version of events, claiming that the company had yet to even submit an application for approval to sell the device.

Hoping to pick up an iphone 4 when I return this autumn. Pity South Korea are so against allowing foreigners to have phone contracts.
2

Korea should approve it... then deny it the next day.
Then send a message back to Apple saying they need to remove all logos from the phone (or adhere to some other asinine arbitrary rule) before it'll be re-approved.
R

And here's to hoping it can compete fair and square and contribute to the normalization (by international standards, at least) of S. Korean web design.

That's not too worrisome because Apple has sold 500,000 iPhones within the first 4 months on the market (November 2009 to March 2010) which became a major embarrassment to Samsung and LG. No doubt they're over 800,000 by now.

Nice. Another market for the iPhone 4 to conquer.
K

Nice.. That's a good news for S. Korea. I hope that this will continue.
B

KenIphone said:
Nice.. That's a good news for S. Korea. I hope that this will continue.
Click to expand...