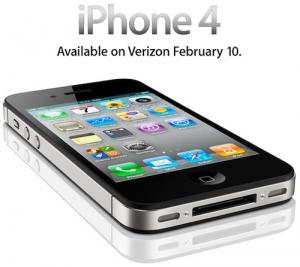 Research firm IHS iSuppli today announced that it has completed its full teardown of the CDMA iPhone that launched on Verizon this week, estimating that the device carries a bill of materials cost of about $171.35, or approximately 9% less than the original iPhone 4.Despite having nearly the same functionality and a similar bill of materials (BOM) as the previous model, the new code division multiple access (CDMA) version of the iPhone 4 carried by Verizon Wireless includes significant changes in its design and component selection, IHS iSuppli teardown analysis indicates.

The latest version of the iPhone 4 carries a BOM of $171.35, down from $187.51 for the previous model, based on a preliminary pricing estimate issued in June. When manufacturing expenses are added, the total production cost for the CDMA iPhone 4 amounts to $178.45.While some of the difference appears to simply be due to reductions in the cost of components over time and would similarly affect the GSM iPhone 4 if it were evaluated today, Apple has made a few design changes that may have reduced costs for the company.

Most notably, with Apple's adoption of the MDM6600 "world-mode" baseband chip from Qualcomm offering integrated GPS circuitry, the company has been able to eliminate a Broadcom GPS chip that is present in the GSM version of the iPhone 4. The report also points to a revised version of the Wi-Fi combo chip module from Murata as an example of a design change adopted by Apple for the new device. The new module is smaller than the one used in the original iPhone 4 and represents further optimization by the component supplier.

Presumably unrelated to cost structures, the report also discusses Apple's modifications to the antenna design, which utilizes a separate Bluetooth/WLAN antenna isolated from the enclosure and allows the company to dedicate a portion of the frame as a diversity antenna to improve reception.

iSuppli's bill of materials cost estimates account only for the cost of the individual hardware components used in the device, with an additional amount added on to reflect manufacturing costs. The estimates do not include other costs involved in product development, manufacturing, and sales, such as research and development, software, patent licenses, marketing, and distribution expenditures.

How can it have similar bill of materials but significant changes in component selection? Do words have meaning? That said, it's nice to see details like this.

And the iPhone still retails for the same amount.
A

qtx43 said:
How can it have similar bill of materials but significant changes in component selection? Do words have meaning? That said, it's nice to see details like this.
Click to expand...

the big difference is the radio, everything else is pretty much the same. except for the wifi where the supplier made a change
B

Very interesting. Remember all the naysayers who were DEAD CERTAIN no CDMA iPhone would ever come about because it would just be SO much more expensive for Apple to produce as one of the main reasons?

And now the truth is it's costing them less to make and will have higher profit margins than the GSM variant.

I still suspect Apple would prefer a single version and I think at some point it will be dual mode, but clearly the numbers don't lie...they aren't hurting themselves by having 2 versions.
D

He means that the price of the iPhone should be reduced by $10.

dethmaShine said:
He means that the price of the iPhone should be reduced by $10.
Click to expand...

Which still makes no sense.

Basic Econ 1010: you price it based on demand, not how much it costs you.

K I am confused I thought they both cost about $600
Click to expand...

iSuppli is estimating that the parts cost $187. Now throw in the cost of assembly/labor, shipping, storage, marketing...

qtx43 said:
Do words have meaning?
Click to expand...

"When I use a word," Humpty Dumpty said, in rather a scornful tone, "it means just what I choose it to mean  neither more nor less."

"The question is," said Alice, "whether you can make words mean so many different things."

"The question is," said Humpty Dumpty, "which is to be master  that's all."

Integrated GPS on the chip may explain some of the issues people have been having with their GPS signal not being as strong as it was on previous versions of their iPhones:

JustLeft said:
- GPS - it is much slower to acquire a lock than my AT&T iphone. Once it gets a lock it loses it easily. For example, on my way home tonight I launched Navigon, set the iphone on the dash as far forward as it could go, selected 'take me home' and had a clear view to the sky. While driving it warned me on 3 different occasions that it was losing its' lock and was accurate to 90 meters. A four mile drive and losing the location lock 3 times. When I came to a stop light the location would jump around, not knowing which direction I was heading. This never happened on my AT&T ip4. I also tested the GPS with Runkeeper. I used this program frequently with my AT&T ip4, without issue. On the Verizon iphone it was 1/3 of a mile off, with a GPS lock.

I am torn as to keeping this phone. The data issues could be resolved, but the GPS issues could mean my phone is defective. I know this GPS is now on an integrated chip and it's performance may not be as good as the dedicated GPS chip.
Click to expand...

i agree on price based on demand.

Yankee617 said:
"When I use a word," Humpty Dumpty said, in rather a scornful tone, "it means just what I choose it to mean  neither more nor less."

"The question is," said Alice, "whether you can make words mean so many different things."

"The question is," said Humpty Dumpty, "which is to be master  that's all."
Click to expand...

alent1234 said:
looks like the price of flash is not dropping as i thought it would
Click to expand...

It was only estimated as 27$ of the price to begin with. It could have halved in 6 months and it would barely make a different.
S

Seems to me there's a couple of 'newer' components present.
S

Even though flash prices aren't really dropping, it would be nice to see a 64GB iPhone.

128GB NAND chips already exist. It's only a matter of time until Apple incorporates them into the iPhone.
V

no wonder SJ only gets a $1 a year

This is the cost of the parts only. No shipping, design, engineering, assembly and labor, etc etc etc.

Go get a repair done on your car. Part is usually a lower expense than the labor.
K

Basic Econ 1010: you price it based on demand, not how much it costs you.
Click to expand...

Since you want to talk about basic econ, let me teach you a little something. Price is determined by both demand AND supply. When the cost of production is lowered, the entire supply curve/function/schedule (whatever you want to call it) shifts to the "right". This means that at any given selling price, Apple is willing to supply more units than before.

The result of this shift, with demand intact, is that more quantity of goods are sold and at a lower price. It seems counterintuitive and worse for the company right? No. Revenue is increased and total profit is increased, even though the profit per device may go down.

Of course this is just basic econ right? There may be other reasons Apple is keeping the price the same, such as uniformity of prices across carriers, etc etc. But the reason is not what you said it is and its not so straightforward, so try to be less arrogant about it next time.
You must log in or register to reply here.
Share:
Facebook Twitter Reddit Email Share Link
Register on MacRumors! This sidebar will go away, and you'll see fewer ads.
Sign Up
Top Bottom