Apple has just released iOS 5.0.1 to the public, bringing fixes for battery life issues introduced with iOS 5. The release also brings several other enhancements including multitasking gestures for the original iPad.

This update contains improvements and other bug fixes including:

The build number on the public release is 9A405, an increment of one build over the beta 2 build seeded to developers last Friday.

iOS 5.0.1 is available for iPhone (4S, 4, and 3GS), iPod touch (third- and fourth-generation), and all iPad models. The update is available for download via iTunes, but is not yet showing up as an over-the-air update for direct download to iOS devices.

Update: Several European users are now reporting that iOS 5.0.1 is available as a 44.6 MB over-the-air update on their devices, but it still does not appear to be showing up on devices in the United States. 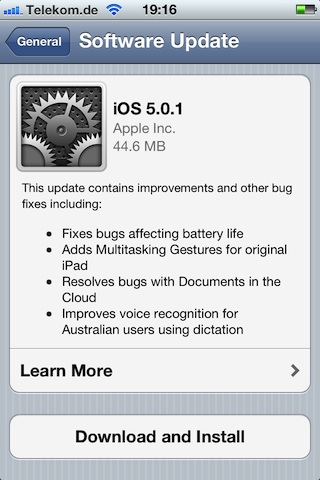 Update 3: The over-the-air update of iOS 5.0.1 now appears to be making its way to the United States, but it may still take some time to roll out to all users. Users are reporting over-the-air download sizes of 40-55 MB depending on device.

Update 4: CNET notes that iOS 5.0.1 addresses the security vulnerability disclosed by prominent security researcher Charlie Miller earlier this week. Miller demonstrated the vulnerability by slipping an app into Apple's App Store, a move which resulted in Apple banning him from the iOS developer program.

Hallelujah ! But I'm waiting for it to be available as an OTA update. Wanna try that thing out

Not showing up on OTA Software Update.

So if my battery was fine will it get even better?

Upgrading OTA now (in the U.K.). Download took around a minute.
D

Is it not over the air?

When will it show up on the OTA Software Update?
E

picked a good time to restore my phone, no idea that this was going to be released today.
C

Hopefully the OTA shows up soon . I'm interested to see the improvements.
F

dethmaShine said:
Is it not over the air?

It will be, just need to wait for the servers to populate first! Try again in 30-minutes.
P

Any news on if this fixes the 1/2 speed podcast playback issue on the iPad?

Not available on my iPhone yet.

And OTA is live in Germany ! 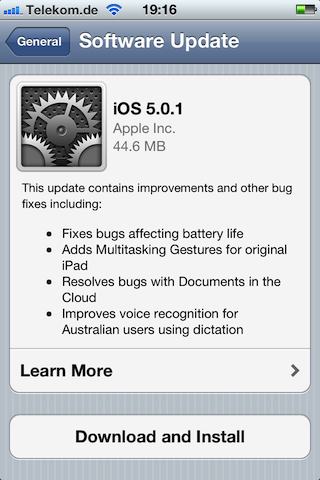 OTA worked on my 4S

Will this only be available via desktop update or is there an OTA expected?

It's a delta update (== downloads only the changes over the preceding software). ~45 MB for me.
D

fishmoose said:
It will be, just need to wait for the servers to populate first! Try again in 30-minutes.
Click to expand...

I think I missed the sarcasm tag. ^ That is exactly what I meant. :|

Frenchjay said:
Will this only be available via desktop update or is there an OTA expected?
Click to expand...

Its rolling out over both, you might see it on your phone first, or iTunes.

What about the no audio during outgoing calls bug? Is this fixed as well?
N